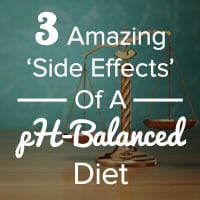 Despite overwhelming scientific evidence found in mainstream studies, the Medical Establishment still blatantly ignores the bone-health benefits of a pH-balanced diet. But the fact remains: eating approximately 80% alkalizing foods and 20% acidifying ones creates a balanced environment that allows bones to thrive, and provides some remarkable whole-body benefits.

So in today’s post, we’re going to take a look at how the alkalizing process works, the role of diet, and why it’s so incredibly good for you. You’ll also discover three little-known, scientifically-proven benefits of emphasizing alkalizing foods that chances are your doctor doesn’t know about.

We have lots of exciting discoveries to talk about! So let’s start with a brief review of how the body balances its pH.

How Is pH-Balance Maintained?

Plasma pH levels are so important, that a myriad of biological processes are in place to keep it stable. This means that if you’re eating foods that cause an acidic environment (more on acidifying foods later), your body will do everything it can to neutralize or buffer those acids – down to taking calcium stores from your bones.

The preferred alkalizing substance is not minerals from bone, but bicarbonate, which is recovered by the kidneys during the detoxification process, and then excreted into the bloodstream to alkalize the pH. If there’s too much acid in your system, your kidneys must filter it out during this process, and release more bicarbonate into the bloodstream. And as the bicarbonate supply gets depleted in the presence of too much acid, calcium, a powerfully alkalizing mineral, is removed from bones.

This excess acid residue in the body can come from any number of sources, from environmental toxins to medications. But the most common cause of acidosis, or an excessively acidic body environment, is from the foods we eat.

What Makes A Food “Acidifying”?

When foods are metabolized and processed in the body, they leave behind an ash residue that is either acid or alkaline. It actually has nothing to do with the acidic or alkaline nature of the food before it’s eaten.

For example, citrus fruits are rich in citric acid, but they leave behind an alkaline residue after digestion, so their effect on the body is alkalizing. In contrast, foods like meat, eggs, dairy and most grains, which make up the bulk of the average Western diet, leave behind an acidic residue, even though the pH of the food itself may be alkaline (like cheese and milk).

By decreasing acidifying foods and increasing foods that are higher in alkaline residue, you can give your kidneys a break and not deplete the bicarbonate reserves. In addition, alkalizing foods increase the level of serum bicarbonate, thus automatically setting the stage for bones to thrive.

Another note on alkalizing foods, which are primarily fruits and vegetables – these foods contain significant amounts of potassium bicarbonate, which balances sodium and promotes alkalinity, or metabolic alkalosis.

Scientists have shown for years that metabolic alkalosis builds bone in a very direct and distinct way. Yet to this day, you won’t hear mainstream doctors say anything about alkalizing diets to prevent and reverse osteoporosis and osteopenia.

This fascinating study shows how body alkalinity keeps calcium in bone where it belongs. Researchers cultured neonatal skull bone from mice for 48 hours in one of three mediums: a control, a moderately alkaline, and a very alkaline. The results were undeniable:

“Alkalosis caused a decrease in osteoclastic beta-glucuronidase release, which was correlated inversely with pHi [initial medium] and directly with JCa+. Alkalosis also caused an increase in osteoblastic collagen synthesis, which was correlated directly with pHi and inversely with JCa+. There was a strong inverse correlation between the effects alkalosis on osteoclastic beta-glucuronidase release and osteoblastic collagen synthesis. Thus metabolic alkalosis decreases JCa+ from bone, at least in part, by decreasing osteoclastic resorption and increasing osteoblastic formation. These results suggest that the provision of base to neutralize endogenous acid production may improve bone mineral accretion.”1

In other words, an alkaline state in the body stops calcium from being excreted from the bones (calcium efflux), and it does this by increasing the activity of osteoblasts, the cells that build bone, and suppressing osteoclasts, which tear down bone. In addition, neutralizing the “endogenous acid” (acid within the body) through “the provision of base” is cited as an improver of bone mineral growth and increase.

The best way to provide base, of course, is via an alkaline diet, such as that described in the Osteoporosis Reversal Program.

This is not the only study to confirm the important benefits of an alkaline diet. A much more recent study from 2009 shows similar results in human participants.

One hundred and seventy-one men and women over the age of 50 randomly received a placebo, potassium bicarbonate, sodium bicarbonate, or potassium chloride for a period of three months. All 171 participants received calcium and vitamin D supplements daily.

At the end of three months, researchers concluded that:

“Bicarbonate, but not potassium, had a favorable effect on bone resorption and calcium excretion. This suggests that increasing the alkali content of the diet may attenuate bone loss in healthy older adults.”2

Now that you know how good an alkaline diet is for bones, I can’t wait to show you three little-known but very important health benefits of a pH-balanced diet.

Remember how I mentioned earlier that potassium bicarbonate balances sodium? That ties in with this study, which shows that increasing potassium lowers blood pressure.

The 46 participants in this UK study all had high blood pressure, and ranged in age from 18 to 75. They were randomly given a placebo, potassium bicarbonate, or potassium chloride for four weeks (this should sound familiar!). The participants blood pressure was monitored and the data reviewed at the end of four weeks.

The study goes on to note what sounds like something straight out of the Osteoporosis Reversal Program:

The next benefit of a pH-balanced diet may surprise you…

To determine the relevance of the pH of saliva in periodontal health, researchers studied the salivary pH of 300 participants, divided into three groups: one group had healthy gums, the second group had chronic gingivitis, and the third group had chronic periodontitis (a serious gum infection that destroys the supportive tissues and bone around the teeth).

They found a direct correlation between salivary pH and periodontal health:

“A saliva pH of 7.0 usually indicates a healthy dental and periodontal situation. At this pH, there is a low incidence of dental decay combined and little or no calculus. Therefore, stable conditions should basically be found in this environment.

A saliva pH below 7.0 usually indicates acidemia (abnormal acidity of the blood). If a chronic condition exists, the mouth is more susceptible to dental decay, halitosis and periodontitis. Chronic acidemia can be a causative factor for a multitude of diseases affecting the whole body.”4

That’s not the only way that acidosis affects the whole body. Your body’s pH influences your immunity, too.

You immune system has a profound effect on your whole body and your overall health. And scientists have confirmed a connection between an alkaline pH and immunity, thus adding yet another way in which an alkalizing diet benefits your whole body.

Basing their research on the established fact that “acid-base homeostasis” is vitally important for normal cellular function and physiology, researchers at Dublin Institute of Technology reviewed the data on body pH and immunity.

They concluded that the effect of pH both inside and outside the body’s cells “cannot be ignored,” noting that acidosis produces immunodeficiency which is then “reversed on correction of the acidosis.”5

The researchers also concluded that an increased “awareness of the relevance of the environmental pH surrounding immune cells and organs”5 is called for.

And awareness is certainly increasing, as, surprisingly…

Celebrities Are Advocating The Alkaline Diet

…while the Medical Establishment continues to willfully ignore it. Although an alkaline diet is not a “fad diet” by any means, as more and more celebrities, including Jennifer Aniston and Victoria Beckham are embracing it, it takes on a “trendy” air. But this is a healthful trend for a change!

In a recent Celebuzz article, the writers point out that celebrities swear by the healthful attributes of a pH-balanced diet.6 The article claims that the science behind the alkaline diet’s benefits is not clear; but obviously, they are not looking deeply enough, because it is indeed clear from the research noted above (and more) that an alkaline diet provides a host of scientifically-proven health benefits.

But if you’re following the Osteoporosis Reversal Program, you’re already well aware of this and much more about the importance of a balanced body pH.

In fact, this is at the heart of the Program. It explains in detail the far-reaching impact of an alkalizing diet, with quotes such as this one, pointing to the universal push and pull between acids and bases:

“Scientists have confirmed that the pH level is an indication of the force used between negative ions (alkaline-forming) and positive ions (acid-forming) to push against one another, and that it represents the measurement of electrical resistance between negative and positive ions in the body. Electrical resistance is a form of energy that all living organisms have at the molecular level.”7

“The blood, lymph and cerebral spinal fluid in the human body are designed to be slightly alkaline at a pH between 7.35 and 7.45.”7

Through a balancing diet like the one described in the Osteoporosis Reversal Program, a desirable pH can be achieved, protecting your bones from a debilitating calcium loss and helping your overall health in many ways.

Not only will you be ahead of the Medical Establishment if you follow the Osteoporosis Reversal Program; you’ll also be promoting health throughout every body system.

Here’s to healthy bones, healthy bodies, and staying ahead of the curve!