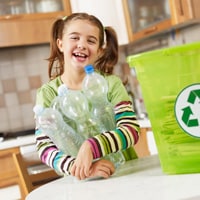 There’s a commonly used chemical that is well-known for its harmful effects on the human body. Despite its bad reputation, its use continues to be widespread. As if all the known harm caused by this substance were not enough, now a brand-new German study reveals another unexpected side effect that can weaken your bones.

If you’ve ever seen a water bottle labeled “BPA Free,” then you know what chemical we’re talking about. It’s…

BPA is just about everywhere. Here are some common objects and products that contain BPA:

Why does this matter? Introduced in the 1930s, BPA has been causing health problems for decades. That’s because …

There is so much research showing the harmful effects of BPA that it’s hard to know where to start. From BPA in dental fillings causing “impaired psychosocial function in children”1 to the recent ban on the use of BPA in baby bottles and sippy cups,2 the toxic nature of this chemical is well-known and generally accepted by the public.

BPA has Been Proven Harmful in the Past

The just published German study we’re going to take a look at today refers to a newly discovered toxic effect of BPA. According to one of the study researchers Dr. Dieter Swandulla from the Institute of Physiology II at the University of Bonn, “This substance has been shown to affect the hormonal system and may have negative effects on the function of enzymes and carrier proteins… It seems that fetuses and newborns are particularly sensitive to BPA,”3 he said.

In fact, BPA is so notoriously toxic that scientists attempted to come up with a safer alternative. (More on that later.) Now, let’s look at what BPA’s toxicity means for your bones.

The brand new University of Bonn study discovered that BPA affects calcium absorption at the cellular level.4 Cell membranes (including bone cell membranes) have calcium channels through which calcium can enter the cell. Think of them as little doorways. Once inside, the calcium “tells” the cell what it needs to do. The process is called…

Calcium signals cells to act or refrain from acting in a certain way. For example, calcium “tells” blood vessels and muscle cells to contract or relax. This cellular communication is crucial for many body systems, including (and especially) bone remodeling.

Think about it – when your bones experience healthful stress, such as the kind you exert on them when you engage in weight-bearing exercise, osteocytes in your bones must “sense” this strain and communicate it to the appropriate effector cells, such as bone-building osteoblasts. Calcium acts as a mediator in this process, going between various bone cells and signaling them to build or tear down.

The University of Bonn study, which was done on both mouse and human cells, found clear evidence that BPA blocks these calcium channels.4 It acts like a lock, shutting out vital calcium and breaking cellular communication. The study also mentions that drugs used to treat high blood pressure, cardiac arrhythmia, and other symptoms have the same calcium-blocking effect as BPA (hence their name, calcium channel blockers or calcium antagonists).

Fortunately, the researchers discovered that the calcium-blocking effects of BPA are reversible. In addition, research at the Indiana University School of Medicine shows that medication-induced calcium blockage “did not completely abolish load-induced bone formation.”5 In other words, the effect of calcium channel blocking medication on calcium intake is temporary and incomplete. But therapy is typically long-term, so for those who are taking these drugs, calcium intake is interrupted and not fully functional.

If you’re taking calcium channel blocking medications and you’d like to look into natural alternatives, discuss this with your health practitioner before stopping the drug. More often than not, small, easy changes to your lifestyle and diet can make a big difference, such as keeping a healthy weight, exercising regularly, and eating plenty of fresh fruits and vegetables. The good news is that if you’re following the Osteoporosis Reversal Program, you’re already implementing all these beneficial actions!

Since BPA is so obviously toxic, and specifically does harm to bones, why is it still around? Interestingly, because the toxic nature of BPA is obvious, scientists attempted to come up with a safer alternative.

Bisphenol S was created to be a “safer” substitute for BPA. It’s popping up everywhere, too, and its status as a healthier alternative is questionable. It’s even on various kinds of paper, including cash register receipts. In a 2012 study,6 cash register receipts, money, and recycled paper were shown to be coated with BPS. Researchers are concerned that people are absorbing significantly more BPS through their skin than they did when BPA was used. People who routinely handle receipt paper and currency are at the greatest risk for BPS absorption.

Is BPS a Safer Alternative to BPA?

It sure doesn’t look like it. A recent study from the University of Texas6 indicates that BPS mimics estrogen in much the same way as BPA. Researchers found that when rats’ cells were exposed to BPS levels comparable to what humans would experience in normal everyday exposure, the cells were unable to respond properly to natural estrogen. In other words, it caused a disruption in hormonal response and balance, just like BPA.

So we’re bombarded on all sides by BPA- and BPS-containing products which can impair bone function.

How to Avoid BPA and BPS

Earlier, we looked at various items that tend to contain BPA. In addition to finding BPA-free substitutes for those items, there are other ways to avoid BPA exposure. Here are some ideas.

Make Sure You’re Getting the Right Kind of Calcium

Unfortunately, it might be impossible to avoid all BPA, so in view of the new study which confirms that BPA blocks calcium channels, it’s crucial to make sure you’re eating plenty of calcium-rich Foundation Foods listed in the Osteoporosis Reversal Program.

Also, it’s important to take the right calcium supplement, one that is “bioavailable,” or easily absorbed by the body. A calcium supplement that “plugs in” to those cellular channels and does its signaling job is ideal.

What Kind of Calcium Supplement is Best?

There are several key things to look for in a good calcium supplement.

All of these requirements are met with TrueOsteo

TrueOsteo contains several Foundation Supplements and trace minerals, and it also has extracts of Amla fruit and cilantro leaf. In addition, TrueOsteo contains Ashwagandha, an herb that’s been shown to reduce cortisol levels in the body, thereby protecting your bones from this stress hormone.

TrueOsteo offers a year-long, full refund if you are not satisfied; simply return the remaining bottles at any time over the next year. And TrueOsteo also offers a 20% off coupon exclusively available to the Save Our Bones community. Just enter SAVEOURBONES at checkout to receive your 20% discount.