Canola Oil: Good Or Bad For Your Bones? 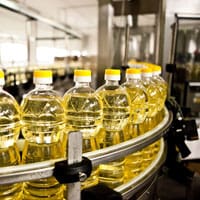 Canola oil, an unsaturated fat, has gotten a reputation for being healthful. In fact, it’s considered a preferable stand-in for oils like corn, soy, and others. But is it really a healthier choice?

The hype behind canola oil may be just another case of marketing over evidence, and today we’re going to look at the data and unmask five truths about this mysterious, misunderstood oil.

The History And Manufacture Of Canola Oil

Canola oil has an interesting history. It was born of the decades-long search by Canadian botanists to produce an oilseed that could grow prolifically on Canadian prairies. Starting with the rapeseed, an oilseed plant that’s related to mustard, turnips, cabbage, etc., plant breeders developed a unique form of this member of the Brassicaceae family.

After much genetic manipulation, they came up with a cultivar that the Rapeseed Association of Canada christened “canola” – a combination of “Canada” and “oil” – that seemed like the perfect oil. It is not the same as rapeseed oil, which is very high in erucic acid and was used strictly as a fuel in past centuries.

Canola oil has a low erucic acid content, and is resistant to drought and disease. In 1998, genetic engineering produced an exceptionally resistant plant that now makes up more than a quarter of canola crops. In the United States, almost 100% of canola crops are genetically modified (GM).

That’s the first red flag. Genetically modified crops are heavily sprayed with toxic pesticides and herbicides because they have been designed to resist high levels of these chemicals that would kill ordinary plants. This is one of various ways that GMOs harm your bones.

Now that we’ve looked at how the canola oil seed was developed, it’s time to take a look at its manufacturing process.

How Canola Oil Is Made

How does a cruciferous seed become a uniformly odorless, almost tasteless product? It starts with huge quantities of canola seeds, which are pressed by machine at extremely high pressure to extract the oil. “Canola cakes” are left behind as a byproduct, and are essentially made of protein; but there is a portion of oil left that cannot be extracted by pressing. So the cakes are immersed in a chemical solvent to separate the last bit of oil from the protein. The remaining protein, now free of oil, is sold to farmers as feed for animals (another reason to choose grass-fed, free-range meats!).

Next, the oil is “washed” or mixed with sodium hydroxide, also known as lye. If you’ve ever worked with or around lye, then you know how caustic this material is. The lye-oil mixture is spun in a centrifuge to separate the oil from “impurities.” What that means is removing anything that would give the oil flavor, color, or other properties of whole, natural foods.

The byproducts of the lye bath, not surprisingly, are sold to soap manufacturers.

The natural wax from the canola seeds still remains in the oil at this point, giving it a cloudy appearance. To remove this wax, the oil is chilled for the wax to separate out from the liquid oil and solidify. This wax is then sold to manufacturers of margarine, shortening, and other products that contain hydrogenated fats.

The final steps involve washing, filtering, and bleaching the oil via steam injection. This creates a highly-refined, odorless, tasteless oil that consumers use to fry foods and manufacturers use to create a plethora of boxed, packaged, processed “foods.”

Bearing this in mind, let’s look at what else the research says about this oil, and five evidence-backed reasons that canola oil is not the healthful alternative it’s touted to be.

1. Canola Oil Is Not ‘Heart-Healthy’

The widespread claim that canola oil is heart-healthy is not backed by research. Instead, the claim is based on the outdated notion that saturated fat “clogs arteries” while unsaturated fat does not. But we’re finding that new light is being shed on the issue of heart health and saturated vs. unsaturated fats.

A comprehensive meta-analysis of 21 epidemiological studies, which included almost 350,000 participants and five to 23 years of follow-up concluded that:

“…there is no significant evidence for concluding that dietary saturated fat is associated with an increased risk of CHD [coronary heart disease] or CVD [cardiovascular disease including stroke].”1

Another extensive study from Japan followed 58,453 men and women aged 40 to 79 for a little over 14 years. Remarkably, the researchers found that the participants’ intake of SFA, or saturated fatty acid, was “inversely associated with mortality from total stroke, including intraparenchymal hemorrhage and ischemic stroke subtypes.”2

Canola oil is a polyunsaturated fat, which is an Omega-6 fat. And that brings us to the next point about Omega-6 and Omega-3 ratios.

2. Canola Oil Is Mostly Omega-6, And Is Not A Source Of Omega-3s

The initial oil that is pressed out of the seeds does contain some Omega-3 fatty acids, but by the time the extensive processing takes place, any Omega-3 still present is rancid and is actually transformed into a trans-fat. That leaves canola oil with no usable Omega-3s and plenty of Omega-6 fatty acids.

This is important, because the ratio of Omega-6 to Omega-3 is unhealthily skewed in the diets of industrialized nations. The widespread consumption of canola oil only adds to the problem.

We’re learning more and more about the necessity of consuming Omega-6 and Omega-3 fatty acids in a ratio ranging from 4:1 to 1:4, with the ideal being 1:1. The average industrialized diet is around 16:1. That’s far too much Omega-6, and research tells us that this promotes “the pathogenesis of many diseases, including cardiovascular disease, cancer, and inflammatory and autoimmune diseases.”3

On the other hand, this same study shows that:

So basically, more Omega-3s and fewer Omega-6s suppress inflammation and its associated diseases. In addition, Omega-3 fatty acids help to relieve depression and other psychological and emotional disorders.4

Rather than taking an Omega-3 supplement in an attempt to balance the excessive Omega-6 consumption, it’s best to balance your overall intake of these two types of fats. This is best done by including Omega-3-rich foods in your diet, which is what the Osteoporosis Reversal Program recommends:

“The highest food sources of omega-3s are salmon, sardines, mackerel, herring, trout, and snapper, all of which are acidifying, so make sure you have them in the right proportion with alkalizing foods.”

Here are some other foods that are rich in Omega-3s, in descending order:

3. Canola Is Not Heat-Stable

Because canola oil contains approximately 7% saturated fat, 63% monounsaturated fat, and 28% polyunsaturated fat, it is not stable at high heat. It contains few hydrogen atoms, and thus is susceptible to oxidation when exposed to heat. Oils like coconut oil are saturated with hydrogen atoms, so they resist oxidation when heated. Two other healthful choices of heat-stable, monounsaturated, hydrogen-rich oils are olive oil and avocado oil. (Contrary to popular belief, olive oil is stable when heated, with a smoke point between 360 and 460 degrees F.)

4. Canola Oil May Lower Cholesterol, But That Does Not Make It Healthy

It’s true that some research shows a cholesterol-lowering effect from canola oil. I’d like to point out that statin drugs also lower cholesterol, and they are anything but healthy! Statins work by activating the same biological pathway as bisphosphonates, making them detrimental to your bones. Besides, low cholesterol is not the “gold standard” in cardiovascular health as the Establishment would have you believe.

When it comes to heart health and cholesterol levels, canola oil is definitely a wolf in sheep’s clothing!

The manufacturing process makes this clear: canola oil is the result of extensive genetic modification and processing, in essence, making it an artificial substance. It’s certainly not a whole, natural food by any means.

Ironically, canola oil is often found in foods claiming to be “natural.” From mayonnaise to granola bars, canola oil is popping up in many foods because it is cheap and abundant, and this includes foods marketed as healthier than conventional versions.

This is yet another argument for getting the majority of your nutrients from whole unprocessed foods. You won’t find canola oil in a potato, for instance, but you are very likely to find it in frozen hash browns and in potato chips.

Canola oil’s ubiquitous nature contributes heavily to the skewed Omega-6:Omega-3 ratio so prevalent in the Western diet. Balancing that ratio is important both for your bones and your overall health.

OsteoCleanse™ provides you with an easy way to balance this and more. It’s soundly based in the proven concepts of clinical nutrition, and it includes specific, cleansing foods that rapidly remove toxins (including osteoporosis drugs) from your system.

Many cleanses also demand you take massive amounts of capsules and other supplements; but OsteoCleanse™ recommends only two during that week: Vitamin C and Omega-3 fatty acid. As you’re bringing your body into a state of equilibrium and begin to eat a more balanced diet, taking Omega-3 supplements short-term makes sense, to help you jump-start the process. And that’s just one aspect of this comprehensive, week-long cleanse, because it also helps your liver and your kidneys function to full capacity, accelerating your bone-building endeavors.

With OsteoCleanse™ by your side, cleansing your body is a lot easier than you ever thought possible!