Does Too Much Sodium Cause Osteoporosis? 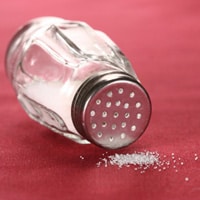 A University of Alberta researcher and his team have discovered a new link between sodium and calcium. Their goal was to decipher the reason why when too much sodium is present in the blood, it is excreted via the urine along with a proportionate amount of calcium. Since greater than normal sodium and calcium excretion can lead to kidney stones and osteoporosis, mainstream scientists have been searching for the molecules that regulate both.

As it turns out, this latest study has shown that the same molecules control both sodium absorption and regulate calcium. Unfortunately, the researchers seem to focus on the minutiae rather than looking at the big picture, and therefore, they flatly miss the point.

So while their observations may be true, as is usually the case, they fail to see the “missing link”. By the time you’ll finish reading this article, chances are you’ll know more about how sodium and calcium are linked than most mainstream health practitioners. I’ll explain.

According to lead researcher Todd Alexander:

“When the body tries to get rid of sodium via the urine, our findings suggest the body also gets rid of calcium at the same time… This is significant because we are eating more and more sodium in our diets, which means our bodies are getting rid of more and more calcium. Our findings reinforce why it is important to have a low-sodium diet and why it is important to have lower sodium levels in processed foods.” 1

While processed foods are loaded with sodium in the form of added table salt and chemicals to enhance flavor and improve texture, crucial information is missing.

Here’s what’s really going on, based on the studies of prolific pH balance researcher Lynda Frassetto and team, whom I mention in the Osteoporosis Reversal Program and in its Bibliography. She correctly explains that:

“A typical American diet contains amounts of sodium chloride far above evolutionary norms and potassium far below those norms… The inverted ratio of potassium to sodium in the diet compared with preagricultural diets affects cardiovascular function adversely and contributes to hypertension and stroke. The diet can return to its evolutionary norms of net base production inducing low-grade metabolic alkalosis and a high potassium-to-sodium ratio by 1) greatly reducing content of energy-dense nutrient-poor foods and potassium-poor acid-producing cereal grains, which would entail increasing consumption of potassium-rich net base-producing fruits and vegetables for maintenance of energy balance, and 2) greatly reducing sodium chloride consumption. Increasingly, evidence supports the health benefits of reestablishing evolutionary norms of dietary net base loads and high potassium and low sodium chloride loads.” 2

In essence, Dr. Frassetto correctly asserts that thanks to “modern” diets, sodium chloride (table salt) consumption greatly exceeds potassium consumption. This occurs because of insufficient fresh fruit and vegetable consumption, thus disproportionately inverting the sodium/potassium ratio necessary to achieve “metabolic alkalosis”. Instead, those who eat the “modern diets” are in a constant state of metabolic acidosis.

If you have the Osteoporosis Reversal Program, you know more about this topic than your doctor, since you have a good understanding of what causes valuable bone-supporting minerals to leach out of your bones and – ultimately – out of your body. And you also know which form of sodium is best for your bones.

Of course, the newest study completely disregards the important factors that make all the difference. Because even a low sodium diet (and especially when sodium is in the form of table salt), without the presence of potassium in the right proportion – alkalizing potassium present in fruit and vegetables – will cause health problems of a wide range, due to the acidifying effect of sodium chloride.

A potassium-deficient diet, typical of these times, is one of the main reasons why most people are unknowingly living with systemic metabolic acidosis, which leads to bone loss, kidney stones and other health problems such as high blood pressure.

Fortunately, this is easy to correct. As I wrote in the Osteoporosis Reversal Program, “Diet is the culprit, and diet is the solution.”

But mark my words, the new study will open the door to more research – funded by Big Pharma – to find out how the newly discovered “molecule” can be altered so that calcium will not be lost. Get ready for the next generation of osteoporosis drugs!

Meanwhile, and as explained by Dr. Frassetto and by me in the Osteoporosis Reversal Program, the main solution is to maintain the desirable pH balance by eating foods in the proper combination.