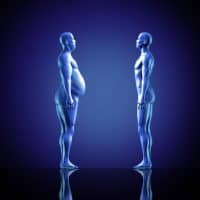 According to a just-published study, the current metabolic health of Americans is remarkably poor: only 12 percent achieve optimal metabolic health without medication. Given that we live in one of the world’s wealthiest nations, with easy access to information about healthful diets and lifestyle, these statistics beg the question: what’s going on?

The five metabolic markers that were used in the study include blood glucose, triglycerides, high-density lipoprotein cholesterol (HDL-C), blood pressure, and waist circumference. As you’ll learn in today’s article, the shocking results boil down to poor nutrition, a sedentary lifestyle, and reliance on a “magic pill” approach to well-being.

This study is yet one more clear example of how the Standard American Diet (S.A.D.) and lack of exercise damage health. We’ll take a closer look at this new study, and focus on how you can improve your health and well-being.

The Genesis Of Poor Health Habits

The new study, which utilizes data collected from the National Health and Nutrition Examination Survey from 2009 to 2016, found that only one in eight Americans met all of the metabolic health guidelines (more on that later). Most certainly, this carries serious implications for public health.1

It’s not all bad news, though: while separate assessments of risk factors revealed that fewer than half of all Americans had their waist circumference, glucose and blood pressure levels within the optimal range, almost three-fourths had triglycerides and HDL-C within optimal levels. Younger, well educated, physically active, non-smoking females were found to have a better overall metabolic profile.

However, this is still far from ideal. And unfortunately, many Americans listen to their doctors who treat health problems as though they are caused by a drug deficiency, and take the “magic pill” prescribed to treat their conditions.

The study’s authors conclude that,

“Prevalence of metabolic health in American adults is alarmingly low, even in normal weight individuals.”

The five metabolic markers that determine whether someone is at risk of developing Type 2 diabetes, heart disease, and/or other health conditions include:

Only one in eight Americans are considered metabolically healthy without taking medication, according to a new study. The five metabolic markers that determine the risk of developing chronic conditions are blood glucose, triglycerides, high-density lipoprotein cholesterol (HDL-C), blood pressure, and waist circumference. While the majority of study participants had normal triglycerides and HDL-C levels, less than half had blood pressure, blood glucose, and waist markers within the acceptable range.

The researchers found that well-educated, younger women, who exercise and do not smoke had the best overall metabolic markers.

The 5 Markers That Impact Metabolic Health

As Savers know, the typical Western diet leads to bone-damaging inflammation and causes a wide array of health problems. Coupled with a lack of exercise and following the reductionist, “magic pill” approach to treat health conditions, the stage is set for spiraling into undesirable chronic health problems.

Most of these markers overlap as causes of ill health. For example, excess weight, physical inactivity, and smoking, all contribute to diabetes, along with excess blood glucose.

Here are some statistics on how each of the five metabolic markers impacts health:

Glucose is another word for sugar. However, blood glucose is necessary: it’s used for energy to fuel our brain, heart, and muscles. Blood glucose becomes problematic when it rises to higher than normal levels, often leading to Type 2 diabetes.

According to the American Diabetes Association, in 2015 more than 30 million Americans, or 9.4 percent of the population, had diabetes. Of these, close to one-fourth were undiagnosed. Also, a staggering 84 million Americans eighteen and older were pre-diabetic, at increased risk for developing Type 2 diabetes, as well as for heart disease, and stroke.2

Triglycerides, the most common type of fat found in the body, are as essential as glucose. Extra calories are stored in fat cells, to be released when the body requires energy.

As with blood glucose, the problem arises when triglyceride levels become too high. This typically occurs due to overeating, smoking, alcohol abuse, certain medications, and Type 2 diabetes that is poorly managed.

While triglyceride levels have improved in the U.S. population, in part due to cholesterol-lowering drugs such as statins, along with a reduction in smoking, the metabolic health results are still poor, raising the risk of heart disease and stroke. One in three men aged 40 to 59 and nearly one in three women 60 and older have unhealthy triglyceride levels, again increasing the risk for heart attack, stroke, and cardiovascular issues.3

Excess weight, smoking, sedentary lifestyle, poor diet, and high blood glucose levels or diabetes are the most common causes of low HDL levels. Conversely, HDL cholesterol can be increased through a healthy diet, moderate exercise, not smoking, and reducing alcohol consumption. Although all of these lifestyle factors are within reach of the majority of Americans, it is the unfortunate reality that many people opt for taking prescription drugs as an easy shortcut.

Blood pressure is perhaps the most common metabolic marker, which is no surprise: an estimated 103 million Americans have high blood pressure, according to the American Heart Association. This is nearly half the adult population of the United States.5

“With the aging of the population and increased life expectancy, the prevalence of high blood pressure is expected to continue to increase.”

High blood pressure, also known as hypertension, has skyrocketed, in part because the AHA redefined blood pressure guidelines in 2017. The standard, which had been 140/90 since 1993, has now been lowered to 130/80. While this revised threshold recognizes the severity of blood pressure as a metabolic marker (high blood pressure is the leading cause of cardiovascular disease-related deaths), it also made 14 percent of Americans “hypertensive” overnight — leading to a bonanza in prescription drug sales.

In several long-term studies, women with the largest waist sizes had nearly double the risk of dying from heart disease as those with the smallest waist measurements.

Abdominal fat is a strong marker of disease risk because the fat in this area, which surrounds the liver and other abdominal organs, is very metabolically active. It releases fatty acids, inflammatory agents and hormones that ultimately increase these metabolic markers: blood glucose, triglycerides, LDL cholesterol, and blood pressure.6

Fortunately, Savers know that the answer to good health doesn’t lie in taking medication, which can actually lead to more problems because of their side-effects. Instead, following a pH balanced diet and engaging in moderate exercise, along with not smoking and limited alcohol consumption are the best ways for achieving and maintaining overall health, and that includes preventing and reversing osteoporosis and osteopenia.

Yet, doctors continue to treat health conditions, including osteoporosis and osteopenia, with prescription drugs.

In addition, the ORP emphasizes movement and exercise for bone health and overall health.

The dismal health statistics of Americans can be significantly improved with the Osteoporosis Reversal Program. Instead of the S.A.D. diet, which is heavy on processed food devoid of the nutrients you need to stay healthy and build your bones, it recommends a 100% whole food diet that is pH-balanced, contains high-quality oils, less animal protein, and a wealth of Foundation Foods, which provide the bone-healthy nutrients for optimal health.

The Importance Of A Holistic Approach To Health

Mainstream medicine views patients as automobiles: if there’s a problem with the carburetor, for example, there is no need to check the tires. But, of course, human beings are not machines. This reductionist approach has led to a “magic pill” solution for every health issue– a form of tunnel vision that ignores the truth: our bodies are marvels of interactive biochemical reactions, and everything works in concert to maintain optimal health.

Clearly, prescription drugs both for overall health and to treat osteoporosis are no substitute for nutritional and lifestyle improvements.

Unlike this reductionist, mainstream approach, a holistic approach to health focuses on treating the whole person and the root cause of conditions, rather than suppressing symptoms with medication. Holistic health takes the physical, nutritional, environmental, emotional, and lifestyle factors into consideration. This is why nutrition/diet, exercise, and lifestyle factors all play an integral role in creating bone health and overall health.