Debunking The Milk Myth: Why Milk Is Bad For You And Your Bones - Save Our Bones 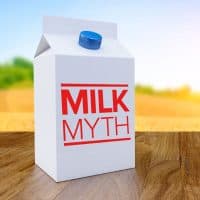 Did you know that in Medieval England parents would tie rabbits' feet around their babies’ necks to ward off illness? Doctors would also spit on wounds because saliva was believed to have healing properties.

The milk myth has spread around the world based on the flawed belief that this protein and calcium-rich drink is essential to support good overall health and bone health in particular at any age. It is easy to understand that the confusion about milk's imaginary benefits stems from the fact that it contains calcium – around 300 mg per cup.

It's important to bear in mind that mother’s milk is excellent nourishment for human babies, but its composition is very different from cow’s milk.

And the 12 year long Harvard Nurses' Health Study found that those who consumed the most calcium from dairy foods broke more bones than those who rarely drank milk. This is a broad study based on 77,761 women aged 34 through 59 years of age.

This should not be ignored, especially in view of recent information by Samuel Epstein, MD, Professor of Environmental Medicine at the University of Illinois School of Public Health, and Chairman of the Cancer Prevention Coalition. In a press release titled “Monsanto's Hormonal Milk Poses Serious Risks of Breast Cancer, Besides Other Cancers” (June 21, 1998) Dr. Epstein concludes that:

But first, I’d like to clarify that unsweetened fermented or cultured dairy products such as yogurt, kefir, and sour cream are acid neutral. Yogurt in particular is chock-full of beneficial qualities. As is the case with milk, organic yogurt does not have rBGH, but even several of the most well-known yogurt brands have stopped using the bovine growth hormone (rBGH). You should call your favorite yogurt company to confirm. One more clarification: when I say unsweetened I mean without sugar or any artificial sweetener. However, you can add honey or stevia, a zero calorie plant-derived sweetener that is delicious and alkalizing as well. I like to carry around stevia packets in my purse so that I'm always able to sweeten food or drinks when I'm on the go.

My favorite milk substitute is unsweetened almond milk, not only because it is alkalizing (as almonds are), but also because it's delicious and tastes very similar to milk. I even cook with it!

What Else Haven't They Told You?

And as always, I'd love to hear your thoughts. Share them with me and the rest of our community by leaving a comment below.