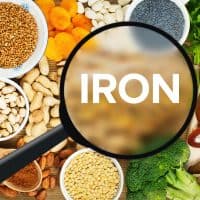 Bone health goes so much deeper than simply having strong bones. Deep within the bone, in the spongy tissue called the bone marrow, where the major components of your blood cells are made. One such blood cell developed in the bone marrow is the red blood cell or erythrocyte, which transports oxygen-rich blood to every organ and tissue in your body.

Your red blood cells would be unable to carry oxygen without iron-rich hemoglobin, the latter a major component of red blood cells. In essence, iron is vital for the production of blood. Low levels of iron in the blood, also called anemia, have been shown to contribute to a myriad of health disturbances, including bone loss.

Conventional recommendations for the treatment of anemia often include iron supplements or an increased consumption of meat. While meat is a rich natural source of iron, Savers know it is acidifying and should be consumed in moderation. And iron supplements have undesirable side effects.

The good news is that there are many bone-smart foods, most of which are Foundation Foods, that can help maintain or increase your iron levels. Today we present to you ten delicious foods that contain more iron than meat and the evidence-backed facts that show the beneficial effects of iron on bone health.

Why Is Iron So Important For Your Health and Bones?

Iron is an essential element for life. It is responsible for oxygen transport, DNA synthesis, as well as energy production.1 Hemoglobin and myoglobin house approximately 70% of the body’s iron. As mentioned earlier, hemoglobin is a protein molecule that carries oxygen in the blood and myoglobin carries oxygen in the muscles. While the majority of iron is contained in the blood and muscles, it is an important mineral the body needs to perform many important metabolic functions.

Iron is predominantly stored in the liver and spleen, mostly as ferritin. Iron is lost by the body through a variety of ways, with bleeding being the primary reason for iron loss. Given the menstruation cycle, women have a higher demand for iron than men. The mucosa of the small intestine is where dietary iron is processed and absorbed. However, only 10% of the iron we consume is absorbed by the body.

Since our bodies can’t synthesize iron, we need to make sure that we consume sufficient amounts of it as part of our diets. There are two types of dietary iron sources, which include heme iron and nonheme iron. Heme iron is present in hemoglobin, which is found only in animal sources such as red meat, chicken, and fish. It is relevant to note here that heme iron makes up 40 to 45% of iron in meat; the rest is non-heme iron. The latter is found in plant-based foods. While heme iron is more readily absorbed, this is not necessarily a good thing. The rapid absorption of heme iron increases the risk of iron toxicity. Additionally, plant sources of iron tend to be more alkaline and have a higher density of nutrients. Your body is better at moderating the absorption of nonheme iron.

Not only is iron important for blood formation and oxygen circulation, but it is also vital for healthy bones. Science has well established the relationship between bone health and iron. Several animal studies have shown that iron deficiency has an adverse impact on bone health, including diminishing bone formation and contributing to increased bone loss.2, 3, 4, 5

What Happens If You are Iron Deficient?

The World Health Organization (WHO) estimates that two billion people are anemic worldwide and that 50% of those anemias are due to iron deficiency.8

Without sufficient iron, your cells become starved for oxygen, causing a cascade of health problems. Iron deficiency results from depletion of iron stores and occurs when iron absorption can not keep up with the metabolic demands for iron to sustain growth and to replenish iron loss, which is mainly related to blood loss.9

Iron is essential for blood production, so when iron stores are low, hemoglobin production slows down. As a result, the transportation of oxygen decreases causing symptoms such as extreme fatigue, weakness, dizziness, fast heartbeat, and chest pain, just to name a few.

Oxygen is vital to life, as well as to bones. Osteoblasts, the cells that form new bones, are strongly oxygen-dependent. As discussed earlier, iron deficiency results in decreased oxygen delivery throughout the body. It has been hypothesized that these low oxygen conditions inhibit the formation of new bone by osteoblasts. Further, it has been suggested that low levels of oxygen stimulate osteoclast activity. As a result, iron deficiency anemia has a significant impact on bone formation.

Are Supplements The Answer?

While iron is an essential mineral, it is possible to have too much of a good thing. Our bodies do an excellent job regulating iron by adjusting the rate of iron absorption through the digestive tract. The hormone hepcidin, which is produced in the liver, regulates the body’s balance of iron.10 Hepcidin acts to suppress the absorption of iron in the small intestine. If the body’s iron stores are high, iron absorption decreases. However, if the iron stores are low, hepcidin levels fall, and iron absorption increases.

Excess iron can be toxic to the body, particularly to the nervous system. If consumed in large amounts, iron toxicity can cause liver damage, bloody stools, vomiting blood, dehydration, low blood pressure, fatigue, fever, and dizziness. Studies indicate that too much iron can increase the risk of diabetes, heart disease, and cancer.

It is nearly impossible to get too much iron through diet alone, but iron supplementation can lead to toxicity. Most adults can meet their iron requirement with a balanced diet.

10 Foods That Have More Iron Than Meat

If you follow the Osteoporosis Reversal Program, then you know that a pH balanced diet consisting of 80% alkalizing foods and 20% acidifying foods is the heart of the program. Beef, turkey, and organ meats are listed as Foundation Foods, and are perfectly acceptable to consume as part of the 20% acidifying ratio. However, there are many other bone-building ways to increase your iron intake. The following ten foods will provide you with as much iron, or more, than meats.

Popeye knew a thing or two about strength and this leafy-green vegetable was his go-to food. Both raw and cooked, spinach is an excellent source of iron. Cooked spinach helps your body absorb higher levels of nutrients, such as Vitamins A and E, zinc, thiamin, calcium, and of course, iron. Just one cup of this Foundation Food contains 6 mg of iron, the same amount as a steak!

Interestingly, Vitamin C helps your body absorb the maximum possible amount of iron from foods.11 Therefore, toss your spinach with a few orange slices or a dash of lemon juice. Better yet, try this Strawberry Fields Salad to increase your iron absorption.

One of the few vegetables that can be enjoyed steamed, boiled, roasted, grilled, sauteed, or raw, broccoli is a nutritional powerhouse. A Foundation Food in the Save our Bones Program, broccoli is packed with iron, as well as many other bone-healthy nutrients, including calcium. As an added bonus, broccoli is high in Vitamin C, which as discussed above, helps with iron absorption.

One cup of steamed broccoli contains over 1 mg of iron. This fantastic Skintastic Broccoli Salad recipe, with its addition of tangerines, is one delicious way to enjoy this iron-rich food.

Another leafy green, kale contains more iron per calorie than beef. Similar to broccoli, one cup of cooked kale contains over 1 mg of iron. A cup of kale also contains a tremendous amount of bone-healthy Vitamin K, as well as several other Foundation Supplements such as Vitamin C, manganese, Vitamin B6, copper, and calcium.

Kale can be enjoyed raw, steamed, or baked into kale chips. This Colorful Kale dish is one of our favorites.

While the potato is the only food on this list that is not a Foundation Food, it still packs a nutritional punch. First of all, a medium potato with the skin on contains 2 mg of iron. It also contains more Vitamin C than a tomato! And bear in mind that potatoes with skin are alkalizing.

While there are so many ways to enjoy a delicious baked potato, why not try it for breakfast? This Veggie-Packed Breakfast Potato increases your iron with the added egg.

Swiss chard is an impressive vegetable. Just one cup of this colorful leafy green contains 1 mg of iron. Swiss chard contains more Vitamin C than spinach, and as such, the iron is more easily absorbed. Also, it’s an excellent source of Vitamins K and A, as well as magnesium, calcium, potassium, and dietary fiber.

Equally important, Swiss chard is loaded with bone-healthy antioxidants in both the green leaves and the bright, colorful stems. Savers know that antioxidants help reduce free radical damage within the body. Swiss Chard is believed to contain up to 13 different types of polyphenol antioxidants alone!

Savers know that the Osteoporosis Reversal Program is based on the premise of an 80/20 pH balance. While it’s important to note that red kidney beans are acidifying, they are a Foundation Food that because they offer a large variety of important nutrients.

Red Kidney beans are packed with iron. In fact, kidney beans contain close to 4 mg of iron per cup! Like all legumes, they contain an iron inhibitor called phytic acid, which has been shown to impair iron absorption.12 However, there are several preparation strategies to help reduce the effects of phytic acid in kidney beans, thus unlocking their iron. For example, soaking kidney beans overnight reduces the phytic acid.13

To learn more about phytic acid, please read this article:

Phytic Acid: The ‘Anti-Nutrient’ Scientifically Shown To Help Your Bones And Your Health

To make chickpeas less acidifying, you can make your own hummus and mix it with our delicious Treasure Trove Tahini.

One cup of cooked lentils contains a whopping 7 mg of iron. These tiny legumes are packed with several Foundation Supplements such as folate, copper, manganese, zinc, and several B vitamins. Lentils also contain the lesser-known, but equally important mineral molybdenum. Among other functions, molybdenum helps to synthesize the bone-protective antioxidant superoxide dismutase.

Lentils can be enjoyed in a variety of ways, but these Bone-Smart Lentil Tacos are a great alkalizing substitute for meat.

Cashews, which are neither a nut or a legume, are another acidifying Foundation Food. The high copper and iron content of cashews work synergistically to help the body form and utilize red blood cells. Cashews contain several Foundation Supplements that are vital for bone health such as zinc, boron, manganese, and magnesium.

Eating raw cashews will help you to obtain all of the health benefits of this delicious food, as processing cashews destroy many of its nutrients.

Dark chocolate is acidifying, so it must be consumed in moderation with the 80/20 pH balance in mind. This Bone-Building Brownie recipe was created to help offset the acidifying nature of dark chocolate. Give it a try!

If you are searching for ways to increase your intake of bone-smart vitamins, minerals, and antioxidants, you’ll love Bone Appétit, the companion cookbook to the Osteoporosis Reversal Program. With more than 200 recipes, all created with the 80/20 pH ratio of alkalizing vs. acidifying foods in mind, you’ll enjoy delicious meals and snacks without having to worry about missing out on bone-smart nutrition.