17 Bone-Healthy Snacks - Save Our Bones

A thank-you gift for being part of the Save Our Bones community!

I can't thank you enough for being a ‘Saver' and for being part of this amazing community! The comments, letters, emails, cards, really touch me and give me the inspiration and encouragement to continue.

As a small thank you, I'd like you to have '17 Bone-Healthy Snacks' report as my gift to you.

All 17 snacks in the report are either pH-balanced or entirely alkaline. They're also designed to keep you satisfied and give your body the nutrients it needs to help boost your bone health between meals.

And if you'd like even more snack ideas plus over 200 recipes that are custom tailored to build your bones, you'll want to check out our Bone Appétit cookbook! I've done all the work for you… Inside you'll find all my bone healthy meal ideas in one beautifully printed book. Plus there are bonuses that make eating your way to healthy bones even easier! 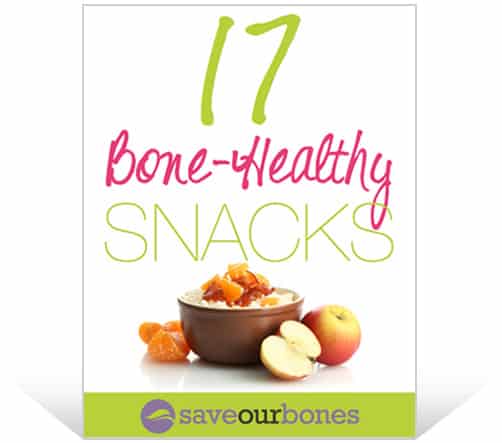 Click here to learn more about the Bone Appétit cookbook