Your Weight Affects Your Bones: True Or False? - Save Our Bones

Your Weight Affects Your Bones: True Or False? 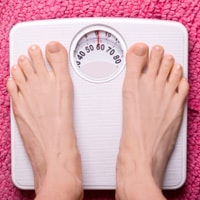 If you thought that mainstream medicine can't get any wackier, well… it has. Here's a line from a recent Women's Health Magazine article:

There you have it. In the words of Women's Health Magazine, being overweight may be great for your bone health.

This is such an outright distortion of the truth that I feel I have to set the record straight.

Put on the pounds to pack on the bone density; or don’t?

First, let’s take a look at an excerpt from the Merck Manual of Health & Aging (Section 3, Chapter 22. Risk Factors for Osteoporosis. Merck Research Laboratories. 2005). You surely know by now that Merck is the maker of Fosamax, the osteoporosis drug “wunderkind” boasting billions of dollars in sales since its debut in 1995:

“Thin people tend to have less dense bones than heavier people. Part of the reason is that body weight puts stress on bone, stimulating it to form more bone.”

Based on the above information, which was obediently adopted by mainstream medicine’s seemingly insatiable appetite for half-truths, it appears that if you want to stave off osteoporosis, you’d be smart to put on the extra pounds and join the already too large overweight population.

Is this one more example of warped scientific conclusions, or could it be that osteoporosis is the ultimate medical renegade challenging a universally accepted health rule? After all, it is no secret that thin people are generally healthier than overweight people and have a greatly reduced risk of falling prey to chronic diseases such as diabetes and heart disease.

Predictably, there is no shortage of studies attempting to answer this question. And they all have one thing in common: they contradict each other. Many conclude that those who are overweight don’t have any bone health benefits over their thinner counterparts. But several other studies show exactly the opposite, with some scientists attributing the increased density to higher levels of leptin, a hormone that among other things, regulates appetite and metabolism and is produced in larger quantities by plus-sized people.

One breakthrough study tackled this issue and quite conclusively demonstrated that excess body fat is actually detrimental to bones, as it is to just about every other body organ and biological process. And no less important is that this study finally elucidates why.

Scientists at the University of Georgia pioneered the use of a unique type of bone scanning equipment to research the link between bone health and excess weight. Instead of the usual two-dimensional scans, they used three-dimensional bone scans.

After adjusting for differences in muscle mass surrounding the bone of the 115 study participants, the results showed that the bones of those with high body fat were nine percent weaker than those of normal body fat participants.1 While the women in this study were merely teenagers – 18 and 19 years old – their bones had stopped growing and age-related bone loss had not yet begun.

The study authors briefly point to Wolff’s law of bone formation, which I cover in detail in the Osteoporosis Reversal Program. In short, Wolff’s confirmed theory – which dates back to the 19th century – postulates that bone growth is stimulated by the constant force applied by muscles. Since overweight people typically have more muscle surrounding their bones than thinner people, prior to this study many researchers arrived to the skewed conclusion that being overweight is good for bone health.

But this study found stunning evidence of an important variable to this equation. As Norman Pollock, the lead author of the study explains:

And Richard Lewis, one of the co-authors and professor of foods and nutrition in UGA’s College of Family and Consumer Sciences comments that:

“The exact mechanisms by which excess fat hinders bone strength are unclear, but studies of obese rats show that they produce more fat cells in the bone marrow and fewer bone cells. Because fat and bone cells derive from the same precursor, it may be that fat-cell production is favored over bone-cell production in overweight people as well.”

This is a perfect example of how we must always question study results that defy logic and ignore the principles of our integrated biology.

How to stay at your ideal weight

Here are two comments that members of the Save Our Bones community posted on one of my other blog posts:

“I am so grateful to have found you and I’ve quit taking Fosamax. I even feel better since I quit about 1 month ago. I’ve been trying to eat healthier and have even lost almost 10 lbs. in the last month. Thank you for your research. I look forward to more of your findings!”

“It has helped not only my osteoporosis but my cholesterol has come down since my last visit to the doctor which i have been seeing six months, and lost 20 lbs as well thank you.”

You see, the beauty of the Osteoporosis Reversal Program is that it not only increases your bone density, but it also balances your entire body. So if you're looking to shed some pounds, the balance you achieve with the program will get you there. And if you're at your ideal weight, that's where you'll stay, and you'll feel better than ever.

Leave your comments below and feel free to tell your story. Till next time…