Stop Brushing Your Teeth... Until You Read This - Save Our Bones

Stop Brushing Your Teeth… Until You Read This 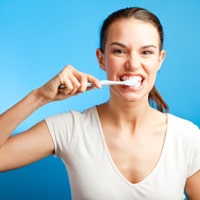 Don’t forget to brush your teeth! This phrase used to be my mother’s reminder every night before I went to bed. But I soon realized that just brushing was not enough, so I also floss after each meal and get a professional cleaning twice a year.

Yet what might really surprise you is this: I pay special attention to what I DON’T do for my teeth.

Indeed, when it comes to dental health and your bones, less is more. Because a toxic ingredient is lurking in just about every dental hygiene product. And this chemical can hurt your bones and your overall health. Here’s a hint for you: it’s also in tap water.

Sodium Fluoride: On Smiles and Lies

Sodium fluoride is the dental health “wunderkind”, supposed to reduce cavities in people of all ages, and especially in children. Most dentists will tell you that there is real science behind using fluoride, since studies have shown a increase of as much as 50% in cavity reduction. No wonder most municipalities supplement their water with it. And dental hygiene products manufacturers jumped on the bandwagon.

Yet fluoridated compounds, including sodium fluoride, have been used as the active ingredient for pest control since the end of the 19th century, mainly against cockroaches, ants, and rats.

What could be more telling than this warning printed on each toothpaste tube? It reads as follows:

”Warning: Keep out of the reach of children under 6 years of age. If you accidentally swallow more than used for brushing, seek professional assistance or contact a Poison Control Center immediately.”

What this warning fails to mention is that the mucosal lining of the mouth is extremely efficient at absorbing chemicals. That is why many quick-acting drugs, such as nitroglycerin, are placed under the tongue.

In other words, the mouth is a portal to your bloodstream, and using products that contain fluoride – even without swallowing them – is like leaving your front door wide open to thieves. And fluoride can rob you of both your bone health and your general health. No wonder those who know this conclude that using fluoridated products is…

A Risk not Worth Taking

And here’s a sign that the problems associated with fluoride are coming out in the open. The CDC is now advising to reduce fluoride supplementation in water to almost half of the previous levels. In its latest report, the agency acknowledges that two in five children in America exhibit dental fluorosis symptoms.

Further evidence of fluoride’s accumulation in the body is that – as many studies have shown – it actually increases the risk of fractures, and in particular the dreaded hip fractures.2, 3 Plus since fluoride is a chemical, it also acidifies your pH, thus making it even more challenging to maintain an alkaline pH to retain and increase bone density.

But that’s not all; fluoride also disrupts collagen formation – something that obviously contributes to the higher incidence in fractures – and may cause skeletal fluorosis, a condition with symptoms similar to arthritis.4 In the Osteoporosis Hydration Protocol you can get your hands on each and every study relating to fluoride, bone health, and your general health.

How to Avoid Fluoride in Dental Hygiene Products

Now that you know that fluoride is absorbed through the mouth, you will most probably be eager to stop using fluoridated dental products, in addition to avoiding tap water,. So don’t get discouraged: it’s a lot easier than you think.

Granted, just about all of the well-known brands, such as Crest, Colgate, Listerine, and others contain fluoride, but quite a few fluoride-free brands are sold in health food stores and in the “green” section of supermarkets.

Besides not having toxic fluoride, my favorite toothpaste has a wide variety of ingredients that have been scientifically shown to improve and prevent gum disease. Aloe vera, CoQ10, and tea tree oil are powerful allies of a healthy mouth. And it’s more than just fluoride free; it also free of sodium lauryl sulfate (a foaming agent that mimics the action of estrogen in the body), artificial colors, flavors, and sweeteners.

My dental hygienist Hindy – whom I’ve been going to for 15 years – is amazed at the condition of my gums and teeth. You see, while I was never prone to cavities, before I started on the Osteoporosis Reversal Program my gums were red, swollen, and bleeding easily. I had to get professional cleanings every three months to prevent periodontal problems.

Soon after following the program, my gums did a 180 degree turnaround. So much so that Hindy was stunned. She asked me what had changed, and I told her about the Osteoporosis Reversal Program and how it balances the body and the pH. As it happens, she had also been diagnosed with osteoporosis, so she got on the program right away.

Researchers have shown that a clean mouth, free of inflammation and irritants, may prevent health problems. And if you’ve taken osteoporosis drugs in the past, it’s especially smart to avoid dental problems and gum issues. So stay away from fluoride, brush and floss often, and keep smiling, because you’re on the right track!