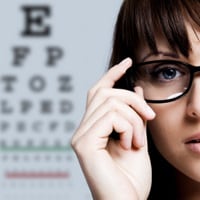 It improves from birth until we reach our 20’s. After that, our vision stays fairly stable, typically up to the age of 45, when in most cases it begins to steadily decline.

Besides the well-known inconvenience of wearing glasses for reading, driving, watching TV, and other daily activities, a large number of studies show that impaired vision is a major cause of falls, many with serious injuries, including the much dreaded hip fracture.

Since impaired vision is associated with a greater difficulty in achieving balance, it is not surprising that a recent study published in the journal of the American Academy of Ophthalmology reports that those with central vision impairment (CVI) and peripheral vision impairment (PVI) had almost three times the risk of falling than those with good eyesight.1 The study also found a proportional relationship between the increased risk of falling with injuries and the severity of CVI and PVI.1

In the UK, vision problems played an important role in the 270,000 falls that happened to people older than 60 in a span of two years.2 This according to The Falls Omnibus Survey which was concluded in 2011.