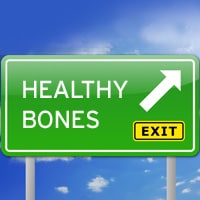 Over the years I've come to be known as a “bone health advocate” among my friends and neighbors. I see it as my duty to share my knowledge with others and to tell them about our community. And when I do, I tend to describe the Save Our Bones community as a resource complete with “nutritional and lifestyle” information that empowers people from all around the world to take control of their bone health and to reverse it naturally .

So today, I'd like to focus on the “lifestyle” component of your bone health improvement. Bone health requires more than just eating the proper foods. There are many aspects of daily living, some of which we rarely think about, that can impact your health in general, and your bone health specifically. Here are three simple lifestyle changes that can have a profound effect on your bone health.

Did you know that how well you sleep can actually affect your bone health?

Benjamin Franklin, one of America's most beloved Founders, had it right when he said, “Early to bed and early to rise makes a man healthy, wealthy, and wise. “

He may not have had access to the scientific studies we have today, but he knew intuitively that good sleep patterns affect our well-being.

A 2004 study of 1,506 men and women from age 55-84 showed a correlation between osteoporosis and those who slept for less than six hours.1

You see, during sleep, cortisol, also known as the “stress hormone”, decreases to a healthy level. Without adequate sleep, the body's natural ability to bring cortisol levels down is limited. And an increase in cortisol levels acidifies the body's pH thereby leeching more calcium from the bones.

On a more practical level, you're more likely to fall and fracture a bone when you're sleep deprived.2

So for a restful sleep, here are a few tips you can try:

Also this is worth noting: In a study published August 1, 2010, researchers from the West Virginia University (WVU) School of Medicine have determined that getting seven hours of sleep is best for maintaining optimal heart health. 3

2. Keep Your Cell Phone Away

In our hurry-up culture, many of us couldn't live without our cell phones. We're so attached to them that we might as well have them grafted to our bodies. But you might want to think twice about where you keep your cell phone.

Researchers in Turkey studied a group of 150 men who all used clips to attach their cell phones to their belts. These men all had their phones attached to their belts for about 15 hours a day, and they had all been using their phones for about six years. The researchers used a special x-ray technique to measure pelvic bone density at the spot where the men carried the phone, and at the corresponding spot on the other side of their body. 4

The results showed a reduction in bone density on the side where the men carried their phones.

The authors of the study conclude that “It would be better to keep mobile phones as far as possible from our body during our daily lives.”

These are preliminary findings and still considered anecdotal, but they do raise interesting questions about the effects of electromagnetic fields on bone health. Yes, these findings are not conclusive, but do you want to take a chance with your bone health?

So here are some important tips for when you're not using your cell phone:

Curiosity may have killed the cat… but it could save your bones!

When Douglas, my oldest son, was about six, we were returning from a fun day at a water park. I was tired after trying to keep up with him all day, and all I wanted was to get into the house and start dinner.

To digress, let me tell you a little bit about Douglas. As a young child, he was insatiably curious. I'm pretty sure “What's that?” was his first full sentence. It was always, “What's this,” “What's that?” to the point that it would have been very easy to tune him out. But I thought it was important to nurture his inquisitive spirit, so I always tried to answer his often non-stop questions.

On this particular day, just as we approached the front door, Douglas did his usual “What's that?” routine. It would have been so easy to brush him aside, to say, “It's time for dinner, I'll look at it later.” But I stifled my instinctive response and glanced over to where he was pointing.

Not wanting to unduly alarm Douglas, I barely managed to contain a shriek. His “what's that” turned out to be a Cottonmouth snake, one of the most dangerous and venomous snakes in Florida. If I hadn't paid attention to Douglas, we could have stepped right into its path.

Fortunately, I was able to contact one of the maintenance workers for our housing complex, and he quickly caught and relocated the snake, so all was well in the end.

The rather obvious object lesson here is: be curious. Ask questions. Explore. Remember that knowledge is power. There are many “snakes” in our path: from doctors who use scare tactics to “scholarly” articles touting the benefits of the new “miracle” osteoporosis drug.

Don't allow anyone or anything to have power over you, especially when it concerns your health. Yes, it can be confusing, yes, there are many “experts” all feeding you seemingly conflicting information. But you can take charge by learning and becoming better-informed.

You're already doing that. The wonderful members of the Save Our Bones community are indeed an inquisitive lot. Your curiosity and willingness to gather knowledge are what brought you here. Use that curiosity to remain in charge. Seek out studies and the latest information.

Your doctor's office is an extremely important place to flex your curiosity muscles. Don't take whatever your doctor says as gospel.

On a lighter note, why do you think they say that doctors are “practicing” medicine?

So don't let fear of what your doctor might say or think keep you from getting the truth. As Thomas Jefferson, another American Founder, declared: “Question with boldness.”