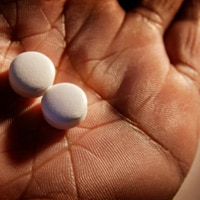 We all hope it will never happen. But if it does, you might be surprised to discover that when it comes to fracture healing, the “don’ts” may be just as important as the “do’s”.

I’m talking about the recent discovery that pain killers inhibit the body’s ability to heal fractures. This includes COX-2 inhibitor drugs such as Celecoxib (generic for Celebrex) and other commonly used non-steroidal anti-inflammatory drugs (NSAIDs) such as Aleve, Motrin and aspirin.

Let’s face it, a broken bone hurts a whole lot, so it is not surprising that it has become almost an instinct to reach out for the drugs. But the consequences of this can mean a much longer recovery period.

How do These Drugs Work?

NSAIDs are mostly COX-1 and slightly COX-2 inhibitors. COX stands for cyclooxygenase, an enzyme that produces prostaglandins. These are fatty-acid derivatives located all over the body that react to immune and inflammatory conditions. COX-1 also protect the stomach by producing mucus and increasing the production of sodium bicarbonate, maintain blood flow and kidney function, and process sensations.

So COX-2 inhibitors were developed as a more targeted prescription drug that would spare the stomach lining from damage. In fact, drugs like Celebrex (celecoxib) and the infamous Vioxx and Bextra entered the market as a ‘safer’ NSAID replacement, but with disastrous results. You might recall that Vioxx was voluntarily withdrawn from the market in September 2004 by Merck, its manufacturer. Less than one year later, Bextra was black-listed as well.

The Ins and Outs of Fracture Healing

There are four phases in fracture healing. Immediately after a bone breaks, the body starts the healing process. Next, there is tremendous inflammation followed by a regenerative phase characterized by new bone growth. The last phase involves remodeling, in which mature bone is replaced by newly formed bone.

The early inflammation serves a very important purpose, since the chemical signals released during this phase are critical in sustaining the healing process. So it makes sense that anti-inflammatory drugs alter the messaging system and wreak havoc in the fracture healing process.

A study conducted on laboratory rats and published in the Journal of Joint and Bone Surgery used COX-2 inhibitors to gage the dosage and subsequent healing delay of thigh bone fractures.1 Interestingly, fracture healing inhibition was evident regardless of the COX-2 dose. But the most noticeable healing delay happened with treatment lasting longer than 15 days.

By extrapolating, the researchers concluded that the same can be said about “regular” NSAIDs and recommend avoiding NSAIDs after a fracture.

This is one more proof that Nature knows best. Because even though pain can be very unpleasant, rushing to intervene and stop the inflammation following injury disrupts the inflammatory response. There is a good reason for all that swelling, heat, and redness; it is a sign of increased blood flow to the area. And increased blood flow means the body can clear debris away from the site of injury and begin with the healing process.2

Below are the over-the-counter and prescription NSAIDs most commonly used:

So what to do for pain, you might rightly ask? There are many ways to naturally deal with it. Here’s one that works and is chock-full of nutrients: beets. Studies have shown that beets inhibit COX-1 and COX-2, thanks to their rich content of betanin, isobetanin, and vulgaxanthin, the specific phytonutrients responsible for their anti-inflammatory action.3

Beets have many other health benefits, so if you haven’t yet, make sure you read my blog post titled ‘The Purple Food That Builds Your Bones'.

Of course I hope you will never need to apply this information, but as I’ve said before, ignorance is not bliss… because it can hurt you.

To your natural health knowledge!