Is Copper Beneficial For Your Bones? - Save Our Bones

Is Copper Beneficial For Your Bones? 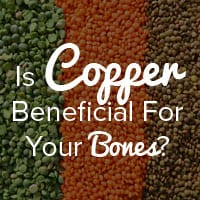 Copper: does the word make you think of bright, shiny pennies, plumbing pipes, or jewelry? Actually, this versatile mineral is very important for the health of your bones and your whole body.

Many biological processes, including bone formation, depend on it – that’s why it’s a Foundation Supplement in the Osteoporosis Reversal Program. And it’s found in delicious foods like almonds, sesame seeds, and a variety of seafood.

Today we’re going to take an in-depth look at copper, starting with its role in reversing and preventing osteoporosis and osteopenia.

How Copper Helps Your Bones

While you don’t need a large amount of this mineral, it’s nonetheless crucial for youthful, fracture-resistant bones, and here’s why.

Antioxidant action also benefits your whole body, protecting tissues besides just bone from oxidative damage. There are other ways that copper benefits overall health, too.

Including Copper In Your Bone-Healthy Diet

Here are some of the richest food sources of copper:

How Much Copper Do I Need?

The US RDA for copper is 0.9 mg, or 900 micrograms, but given its important role in bone matrix synthesis, I recommend around 2 mg a day. For example, one ounce of sunflower seeds contains 519 micrograms, and one ounce of beef liver has 4,128 micrograms.

When you choose a copper supplement, make sure it’s a chelated form. Chelated copper can be found combined with various amino acids, but the bisglycinate amino acid complex ensures the best bioavailability of this important mineral.

You might be surprised to see a post on copper on an osteoporosis site. After all, isn’t calcium the mineral you need for stronger bones? While calcium is very important, it does not work in isolation.

Bone health is dependent on the interplay of many biological processes involving multiple nutrients, enzymes, proteins, and more. Calcium and copper are just single nutrients that deserve periodic emphasis and explanation like all Foundation Supplements on the Osteoporosis Reversal Program.

You’ll find the list of bone-building nutrients known as Foundation Supplements to be quite extensive. Yet the Program simplifies this vast information so it’s not overwhelming. Instead, it’s clearly presented with scientific studies supporting every point, and all Foundation Supplements are accompanied by lists of alkalizing and acidifying foods that contain them.

If you have any recipes or ideas for using some of the foods in this list, please feel free to share with the community for more delicious ways to get plenty of copper.