Low Levels Of Vitamin B12 Linked To Osteoporosis - Save Our Bones

Low Levels Of Vitamin B12 Linked To Osteoporosis 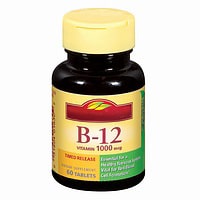 I’m sure you know that the most commonly used supplements to conquer or prevent osteoporosis are calcium and Vitamin D. While both of them have well-known proven benefits, you might not be aware that vitamin B12 may play an important role in your bone health.

A study conducted by epidemiologist Katherine Tucker at the Jean Mayer USDA Human Nutrition Research Center on Aging in Boston, found a link between B12 deficiency and osteoporosis in men, and later confirmed the link in women as well (Journal of Bone and Mineral Research, Volume 20, pages 152-158. Jan. 2005). The research was based on the vitamin B12 blood levels and bone health indicators of 2,576 men and women spanning from 30 to 87 years of age participating in the Framingham Osteoporosis Study.

At least for now, the mechanism by which vitamin B12 and bone health indicators are interrelated is not well understood. However, the study did confirm that both men and women with vitamin B12 levels lower than 148 picomoles per liter (pM/L) were at greater risk of an osteoporosis diagnosis than those with higher levels. Also, study subjects with B12 levels below 148 pM/L had significantly lower average bone mineral density (at the spine in women and at the hip in men) than those with higher levels of B12.

Besides the recently found bone health benefit, Vitamin B12 – also known as cobalamin – plays many important roles in the body, such as the processing of carbohydrates, proteins and fats. It also helps make all of the blood cells, acts as a coenzyme in the synthesis and repair of DNA, and is required for maintenance of nerve sheaths.

A Vitamin B12 deficiency may result in pernicious anemia, a condition characterized by general weakness, numbness of the extremities, pallor, and other symptoms. Foods that contain the highest levels of B12 are liver, meat, fish, and yogurt.

During digestion, hydrochloric acid helps release vitamin B12 from the protein in food and then it is absorbed as it combines with the Intrinsic Factor, a mucoprotein made by the parietal cells in the stomach lining.

The minimum requirement is only 2.4 micrograms a day – the amount in just three ounces of beef. However, approximately 30% of people older than 50 no longer have the ability to absorb adequate vitamin B12 from meat or dairy products. This is due to a lack of stomach acid production, as two articles by R. Carmel confirm (“Cobalamin, the stomach, and aging”, American Journal of Clinical Nutrition, 1997;66:750-9 and “Prevalence of undiagnosed pernicious anemia in the elderly”, Archives of Internal Medicine, 1996;156:1097-100). Additionally, foods highest in B12 have an acidifying effect on the pH (except for plain yogurt), so, as I explain in the Osteoporosis Reversal Program, their consumption should be limited.

A word of caution: Proton Pump Inhibitor drugs such as Prilosec, Nexium, and Prevacid as well as drugs used to treat peptic ulcers (Tagamet, Pepsid, Zantac) can interfere with B12 absorption from food by reducing the release of hydrochloric acid into the stomach. Metformin, a diabetes drug, also indirectly affects the absorption of B12 because it interferes with calcium metabolism and B12 absorption requires calcium.

Your best bet is to take a multivitamin paying special attention to the levels of Vitamin B12 and the rest of the B complex vitamins, as they all act in synergy with each other. The other B-complex vitamins are thiamine (B1), riboflavin (B2), niacin (B3), pantothenic acid (B5), pyridoxine (B6), folic acid, and biotin.