The Buzz About Beer And Your Bone Health: My Take - Save Our Bones

The Buzz About Beer And Your Bone Health: My Take 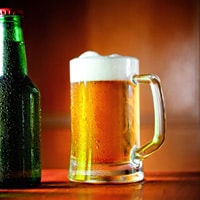 Study toasts beer as being good for your bones

NEW YORK (Reuters Life!) – Beer drinkers now have a good excuse to order another round — the brew may help keep bones strong, a study has found.

NEW YORK (Reuters Life!) – Beer drinkers now have a good excuse to order another round — the brew may help keep bones strong, a study has found.

Researchers from the Department of Food Science & Technology at the University of California, have found beer is a rich source of silicon and may help prevent osteoporosis, as dietary silicon is a key ingredient for increasing bone mineral density.

These were the findings after researchers tested 100 commercial beers for silicon content and categorized the data according to beer style and source.

Previous research has suggested beer contained silicon but little was known about how silicon levels varied with the different types of beer and malting processes.

“We have examined a wide range of beer styles for their silicon content and have also studied the impact of raw materials and the brewing process on the quantities of silicon that enter wort and beer,” researcher Charles Bamforth said in a statement.

The study, published in the Journal of the Science of Food and Agriculture, found the beers' silicon content ranged from 6.4 milligrams per liter to 56.5 mg per liter. The average person's silicon intake each day is between 20 and 50 mgs.

The researchers found there was little change in the silicon content of barley during the malting process as most of the silicon in barley is in the husk, which is not affected greatly during malting.

“Wheat contains less silicon than barley because it is the husk of the barley that is rich in this element.”

But Bamforth told reporters that the results shouldn't be taken too serious. The study examined the beers but it did not look at bone mineral density or analyze patients' data.

“I would first consider flavor and whether you like it or not,” he told science and technology magazine Discover. “Choose the beer you enjoy, for goodness sake.”

It turns out that beer has significant levels of the most bioavailable form of silicon, orthosilicic acid (OSA). And silicon may have a positive effect on connective tissue such as collagen and on growth and mineralization of bone, the latter especially in men and premenopausal women.1

Silicon is involved in bone growth processes by affecting bone collagen turnover and bone matrix proteins such as osteopontin. The latter is a glycoprotein that plays an important role in bone remodeling, wound healing, and certain types of cell-mediated immune responses.2

Have scientists found the pot of gold at the end of the bone-health rainbow? You’ll get the answer when we analyze this study with a fine-toothed comb.

Potential bone health benefits of beer are brewing up a storm

You see, even though dietary intake of silicon has been linked to greater bone mineral density, the devil is in the details: the study that created the “buzz” about beer and bone health doesn’t correlate beer drinking as beneficial to osteoporosis.

Conducted by the Department of Food Science & Technology at the University of California, Davis, Bamworth and Casey, the study authors, reveal that the barley husk is the principal contributor to silicon in beer.3 Also, after testing 100 beers for their silicon content, they observed that the pale colored malts retain the highest levels of silicon because they are more impervious to heat stress during the malting process.

Silicon is present in many alkalizing foods

Call me a party pooper, but I must tell you that beer is neither the best nor the only source of bone-friendly silicon. You see, beer is an acidifying drink because it contains alcohol. Granted, beer has lower alcohol levels than wine, vodka, whiskey, and other drinks, but it is still acidic and it can therefore draw calcium from your bones to correct the low pH. But that doesn’t mean that if you care about your bones you can’t enjoy an occasional beer; you can have it in the right balance, as is the case with any acidifying food or drink.

But the really good news is that highly bioavailable silicon is also found in many alkalizing foods such as beets, pumpkin, carrots, onions, cherries, apples, oranges, and raisins.

The highest levels of silicon are in the skin of cucumbers, bell peppers, and tomatoes. Here's one of my favorite silicon rich recipes:

Combine all ingredients in a large serving bowl and garnish with olives.

As with any other acidifying food or drink, you can still enjoy a “cold one” making sure that it is in the right acid/alkaline proportion.

Also try to eat some cucumbers, bell peppers, and tomatoes to nourish your bones with the most absorbable source of silicon and other bone-smart nutrients.

Now you know what the “buzz” is all about…

Cheers, and please leave your comments below.