Strontium Demystified: Everything You Wanted To Know - Save Our Bones

Strontium Demystified: Everything You Wanted To Know 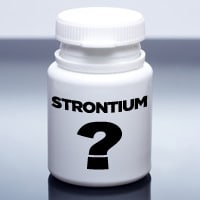 I've answered several questions about strontium as part of my Vivian Answers Day series. But I've noticed that more strontium related questions keep coming, so I've decided to compile all the information about strontium in one place to serve as a handy reference for you.

An Introduction to Strontium

Strontium is an element abundantly found in mineral compounds which has many uses in the metal industry. It is also utilized in medical imaging equipment, pyrotechnics, optics, and pottery glazes. One of the most notorious strontium isotopes is strontium-90, a highly radioactive component of nuclear fallout. Discovered in 1808 in the Scottish town Strontian – hence its name – it is only recently that strontium has come into the limelight as a bone health supplement and drug.

Because strontium is a highly reactive element, it is never found in a pure form in nature. Likewise, the most common over-the-counter supplements are chemically bound to different molecules, such as citrate, lactate, carbonate, and gluconate. Strontium ranelate is a prescription drug where the ranelate molecule is a patentable synthetic chemical. More on this later.

First, I'd like to address the concerns of those of you who are aware that I don't recommend strontium supplementation and wonder about the strontium that's included in some of the organic calcium formulas that I do like.

A Little Bit is Okay!

What I don’t recommend is a separate, additional strontium supplement. For example, some organic calcium formulas contain 5 mg of strontium. But there are also strontium supplements on the market that contain over 600 mg. That’s what you should stay away from.

So What's Wrong with Strontium?

In Vivian Answers Day #6, Maurice asked about this directly:

“You seem to be strongly against strontium supplementation. As many other alternative health advisors are in favor of strontium, can you give a detailed explanation why you do not agree?”

And my response to him was:

This is a rich and controversial topic, as you correctly mention in your question. For that reason, in the Osteoporosis Reversal Program I devote several pages to discuss the drug Protelos TM (strontium ranelate).

Here are the main reasons why strontium ranelate (and by extension, any form of strontium, such as strontium citrate, carbonate, or lactate) is not a good choice:

Strontium is a trace element very similar to calcium. In fact, it is so similar that it competes with the calcium protein carrier in the blood. The human skeleton is mostly made of calcium, which constitutes 1.5 to 2 percent of the body weight of an adult. On the other hand, our bodies only contain 320 to 400 mg of strontium.

Strontium acts as a bone thickener. In the Osteoporosis Reversal Program I mention a study suggesting that it does not affect the quality of the bone mineral, but rather the quantity. In other words, the outer cortical bone becomes thicker.

But If Strontium Thickens Bones, Isn't That Good?

Remember, there is a big difference between thick bones and strong bones. Just like dried-up thick tree branches, thick bones are more prone to fracture than healthy and renewed bones that have good levels of tensile strength. What is tensile strength? It's the bones' ability to resist stretching or pulling. Quoting from the Osteoporosis Reversal Program:

And as mentioned previously, strontium is denser than calcium and gives false bone density test results. Some even recommend reducing T-score numbers by 20% when taking strontium because of that.

In the Osteoporosis Reversal Program I reveal the best ways to boost your bones tensile strength so that they become more resistant fracture.

What about Strontium Ranelate?

In the USA, strontium is not an approved drug, but in Europe, Protelos (strontium ranelate) is on the market.

Protelos is one of the brand names for strontium ranelate, which differs from some of the other osteoporosis drugs in that strontium is a naturally occurring element. However, Protelos is combined with ranelic acid, a purely synthetic molecule. Protelos has its own list of side effects, such as:

And, as with naturally occurring strontium supplements, studies have shown that strontium ranelate mainly thickens the outer cortical portion of bones 2.

The Final Word on Strontium

You may continue to hear strontium touted as a “miracle” drug or supplement. And as we just examined, it's because of strontium's unnatural “hardening” effect.

The bad news is that there is no such thing as a “miracle pill” for osteoporosis. The good news is that you can get started re-building your bones naturally with the Natural Bone Building Handbook. Then to accelerate your natural bone density increase with simple step-by-step instructions, try the Osteoporosis Reversal Program.