It’s no secret that weight-bearing exercise is an integral aspect of rejuvenating and building bone. But you may not have considered strength training and the remarkable number of body systems – including your skeleton – that are positively affected by it.

For example, strength training the neck, as in today’s exercise, actually influences your breathing. And that’s not all. As you perform this weekend’s exercise, you’ll be working toward improving your posture, reducing your risk of head injury, enhancing your balance, improving your gait, and more.

If you take a closer look at the muscles in the neck, you will be amazed at their interconnected nature. First, let’s look at some of these specific muscles. 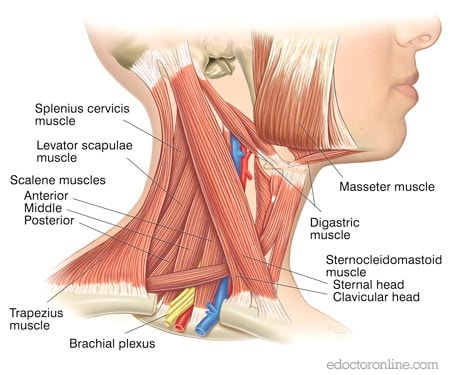 The splenius cervicis is often overlooked, but its size and location make it a very pivotal muscle. It looks something like a sling, with two narrow strips of muscle running down the sides of the neck and joining at the first thoracic vertebrae to form a wider band of muscle.

The splenius cervicis actually begins at the third, fourth, fifth, and sixth thoracic vertebrae, where it is attaches to the bony processes. From there it divides and runs up either side of the neck to insert at the sides of the top two cervical vertebrae. It is involved in flexion, extension, and rotation of the neck.

This muscle is often the culprit in a “stiff neck.” It begins at the topmost cervical vertebrae and attaches to the innermost corner of the scapula. As the name implies, it lifts the scapula when contracted. If you shrug your shoulders, you’re using the levator scapulae.

Named for the Latin word meaning “uneven,” the scalene muscles are an asymmetrical set of three muscle pairs: the anterior, middle, and posterior scalenes. Their points of connection are interesting – originating at the second through seventh cervical vertebrae, they attach to the very top ribs right below the collarbone.

Now we move round the front of the head to the jaw area. The masseter is a facial muscle used in chewing, as it connects the mandible (lower jawbone) to the cheekbone. It is a rather bulky muscle, and very strong. It has a deep and a superficial insertion point (head), with the deep layer being more muscular while the superficial one is larger.

Despite the name, this muscle is not directly involved in the gastric system. It does, however, have two “bellies” connected by a tendon, which is where it gets its name. This curved muscle lies beneath the jaw, beginning at the bone just below the ear (the mastoid process) and inserting at the front center of the jawbone (the symphysis menti).

When you contract your digastric muscle, it lifts a bone called the hyoid, or chin bone.

This rather superficial muscle can be felt on the side of your neck when you tilt your head from side to side. It begins at the very top of the sternum, or breastbone, and the medial ends of the clavicle, or collarbone. It runs up the side of your neck and inserts at the mastoid process just below your ear.

The sternocleidomastoid is involved in neck flexion and rotation of your head from side to side. It also helps your head stay still when breathing, which brings me to the next point.

These Muscles Do More Than Just Move Your Head

The muscles of the head and neck have a variety of roles that may surprise you.

Strong head and neck muscles help prevent injuries, particularly concussions, according to a 2014 study that analyzed the the connection between muscle strength, impact to the head, and degree of injury sustained in female varsity soccer players.

The results showed that players with weaker neck muscles “sustained greater impacts,” suggesting that “neck strengthening may be an important component of any head injury prevention/reduction program.”

Balance is significantly influenced by these muscles. Try this: place your fingertips lightly on the back of your neck near your hairline. Now move your eyes from left to right. Do you feel the slight muscle movement under your fingers? That’s your body preparing for motion based on the movement of your eyes.

This visual component to motion ties in with proprioception, or your sense of your body’s position in space. Fatigued neck and head muscles can negatively impact posture due to their strong influence on this system, and strength training in these muscles affects both static and active posture.

You’re probably aware that breathing deeply is excellent for your bones. Not only are deep breaths scientifically proven to alkalize the body; but deep breathing also reduces stress, which has a detrimental effect on your bones.

It’s remarkable to realize how many roles these muscles have!

You can perform this exercise while sitting or standing. Either way, make sure you are practicing excellent posture before you begin. If you’re not sure what that looks like, take a look at this post for further explanation.

And that’s all there is to it! It’s an amazingly simple exercise, but its isometric nature directly hones in on the very muscles we discussed above.

And here are two other Weekend Challenges that I recommend along with this exercise:

Targeted Exercise Builds Bones In So Many Ways

When you think about it, exercises that improve your overall health also help your bones, and vice versa. When I created the Densercise™ Epidensity Training System, I considered the whole-body effects of exercise via targeted moves that are specifically designed to build bone density in key areas that are prone to fracture.

Densercise™ provides a month’s worth of over 50 bone-building moves, and it takes only 15 minutes a day, three times a week to reap all its benefits. So if you would like to exercise at your own pace, while enjoying significant progress no matter what your age or fitness level, Densercise™ is here to help you achieve that goal.