What Is The Forteo (Teriparatide) Injection? - Save Our Bones

What Is The Forteo (Teriparatide) Injection? 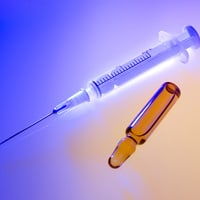 As Big Pharma continues to come up with ever-more creative ways of getting osteoporosis drugs into your body, you may have heard of the latest injectable form of osteoporosis medication: Forteo (teriparatide). Just what is the Forteo injection? It’s not the same as an infusion, which is administered directly into the bloodstream and is taken only twice a year, and it’s not the same as oral osteoporosis drugs taken once a month or once a day. The Forteo injection is actually a shot you give yourself every day for approximately two years.

Keep an eye out, because researchers in Denmark are currently experimenting on a Forteo microchip that can be implanted under the skin. Like an artificial gland, the chip delivers the daily dose of medication without any effort on the part of the patient. (I can’t help but think “yikes” on this one!)

Forcing DNA Together – the Manufacture of Forteo

Back to the question of what the Forteo injection is. It is a synthetic, recombinant form of parathyroid hormone. It is produced using e.coli bacteria (another “yikes”), thus mimicking the amino acid chains present in human parathyroid hormone. Forteo is manufactured by recombinant DNA technology, which involves the bringing together of DNA chains that would never naturally come together to form a whole new (synthetic) substance.

It’s very strange that when bone is exposed to significant amounts of parathyroid hormone (PTH), such as occurs with hyperparathyroidism, it actually causes the bone to break down. In fact, osteoporosis can result from hyperparathyroidism. So if bone breaks down in the presence of PTH, why is it that introducing extra PTH in the form of Forteo is said to have the opposite effect? It apparently stimulates osteoblast activity by some mysterious means that is the opposite of what PTH normally does. Frankly, it’s a disturbing paradox that underscores and adds consternation to the underlying question: what is the Forteo injection?

No one seems to know the complete answer to this question.

We do know, then, that the Forteo injection is a synthetic form of PTH, and that PTH is involved in bone formation and breakdown. Further, we know that Forteo somehow stimulates osteoblast activity and rapid growth of bone. These two things – increased osteoblast activity and rapid growth of bone – are associated with osteosarcoma, a particular form of bone cancer.
At this point, osteosarcoma has only shown itself in patients taking Forteo if those same patients are undergoing (or have undergone) some form of radiation therapy involving the bones. But there may be other contraindications, too – once again, no one really knows as yet. A 2010 University of Texas study concludes, “Although teriparatide reduces osteoporosis-related fractures in select patient populations, important contraindications, such as prior radiation exposure, should be considered before use.”1

You can’t expect to “trick” your body with synthetic substances that mimic natural ones and not suffer some consequences.

So it seems that the question, “What is the Forteo (Teriparatide) injection?” cannot be answered completely. The answers we do have are dubious at best, frightening at worst. I urge you not to become part of a drug experiment. Instead, look to natural means to get your osteoporosis under control. It can be done. You don’t need to risk cancer or other damaging side effects to treat a condition that is not a disease. The Osteoporosis Reversal Program is scientifically-proven, physician-approved, and 100% safe, something that most certainly can’t be said about Forteo!