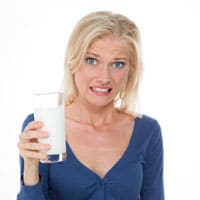 Milk and milk products can be hard to give up, primarily because we’ve been led to believe they’re an essential part of a healthful diet. This is not surprising, given the millions of dollars spent on milk ads and that most doctors recommend osteoporosis patients to drink milk.

But the truth is that milk is neither nutritionally essential nor a good source of calcium for your bones. And your body knows it, so if you need more reasons to continue on a milk-free path, this post is a must-read.

Today you’ll discover four signs that show your body and bones don’t like milk, regardless of what your taste buds tell you!

Let’s begin with arthritic aches and pains, symptoms that you may not associate with dairy intake.

1. You’re Plagued By Aches And Pains

Milk acidifies the body due to its high animal protein content. The pH of pasteurized milk ranges from 2 to 4, with processed, pasteurized milk having the lowest, and therefore most acidic pH.

Not coincidentally, arthritis can be attributed to a build-up of acid in the system, leading to joint deterioration and pain. And of course, an acidic body environment reduces bone density in addition to inflaming joints. In fact, it sets the stage for chronic inflammation, which increases fracture risk.

Milk does contain a significant amount of calcium, but the irony is that milk is so acidifying that the calcium does not get absorbed. In fact, the opposite is true – you actually lose calcium if you drink milk, because your body takes it from your bones to neutralize the acidic environment created by it.

Milk contains high levels of a substance called tryptophan, which is necessary for serotonin production in the brain. Among other roles, serotonin helps regulate the sleep cycle, and is actually required for melatonin production.

But there are plenty of bone-healthy foods that promote sleep, such as chickpea-based hummus, and even some that contain tryptophan, like almonds.

There’s another way that milk can make you feel tired: it’s hard to digest (more on that below), which can simply drain you of energy. In addition, milk contains opiate-like substances, which we’ll take a look at next.

It’s a very unpleasant experience when you feel like you just can’t get your thoughts together, and your brain feels sleepy and sluggish. The reason may be your glass of milk.

Milk contains casein, a protein that is specific to mammalian milk. In cows and other ruminants, alpha-lactalbumin and beta-lactoglobulin make up the majority of the casein proteins, with the latter being the culprit behind most milk allergies.

To compound the casein problem, a mutation in the beta-lactoglobulin casein (or beta-casein for short) has been detected in some cattle (but not goats or sheep). The mutation results in a proline molecule being replaced by a histidine molecule, which makes for a much more problematic casein. Here’s why.

Histidine is not as strongly bonded to an amino acid called BCM7, one of many amino acids that make up casein. Because of this, BCM7 gets released in the GI tracts of anyone who drinks the milk, where it shows up in blood and urine. And BCM7 has a powerful effect on the brain (more on that below).

This A1 mutation – and thus, the worse form of casein – is commonly found in Holsteins, which make up the vast majority of U.S. dairy cows. Even raw, unpasteurized milk “straight from the cow” can contain this mutated casein if it’s from a Holstein. (Note that whey and dairy fat from any breed do not contain casein.)

In cows without the mutation, such as older breeds like Jerseys and Guernseys, BCM7 stays bonded to the proline molecule and does not get into the milk. (Milk from these cows is still an acidifying animal protein, however, and is not recommended for bone health.)

How Does Casein Affect The Brain?

BCM7 has been linked to neurological disorders such as autism and schizophrenia, and has even been implicated in sudden infant death syndrome (SIDS).1 BCM7 has an opiate effect – when autistic children in a double-blind study were given an opiate antagonist, they experienced a significant reduction in symptoms.2

Research has also indicated that BCM7 absorption is much less in individuals who have a healthy digestive tract, which brings us to the next point.

Your digestive system is very complex. One of its primary functions is nutrient absorption, and milk prohibits the assimilation of antioxidants and key nutrients, like magnesium. This is another way that drinking milk undermines your bone health, even though you “feel fine.”

You may think you can tolerate milk, but just because you do not have the classic symptoms of lactose intolerance or a milk allergy doesn’t mean it’s agreeing with you. Conditions like reflux, GERD, indigestion, abdominal pain, diarrhea, and constipation can all be related to dairy.

What’s fascinating is that this information is not new. Way back in 1976, a small study showed clearly that,

“Because milk contains both protein and calcium, and each are stimulants of gastric-acid secretion, there is reason to question its frequent ingestion by patients with peptic ulcer.”3

The experiential evidence is significant here, too – many, many people have found relief from reflux and ulcers when they stopped drinking milk. Yet doctors still recommend milk for upper GI conditions!

I’ve heard from many Savers who were once plagued by GERD or reflux, only to find their symptoms disappeared while on the milk-free Osteoporosis Reversal Program.

When you give up drinking milk, it gives your digestive system, including your liver, a much-needed break.

Ready To Give Up Milk?

If you’re still drinking milk, a good place to start is with a cleanse, where you focus on liver-cleansing foods and eschew milk and dairy products. The Osteoporosis Fresh Start Cleanse: The 7 Day Bone Building Accelerator, is a week-long cleansing plan that does not include milk.

And there’s more to the Osteoporosis Fresh Start Cleanse than just foods and drinks. It consists of six easy steps, including how to cleanse with proper breathing . After just one week, you can look forward to more energy and vitality, better liver and kidney function, a younger look, better sleep, and accelerated bone building.

The Osteoporosis Fresh Start Cleanse also helps you remove other toxins and osteoporosis drugs you may have taken in the past.

“I created the Osteoporosis Fresh Start Cleanse to help you detoxify and to give you a nutritional boost with vegetables and fruits that will strengthen your bones.”

That says it all!