6 Surprising Health Risks Of Poor Posture (Besides Harming Your Bones) 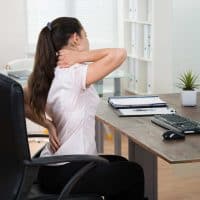 Today you'll learn about the dangers of poor posture. We'll cover how hunched shoulders and a drooping head can hurt everything from your mood to your bones. And as Savers know, proper alignment is essential for good bone health.

What Is Poor Posture

Good posture is achieved with a neutral upright position of the spine. Your head sits above your shoulders, and your shoulders are over your hips. This alignment maintains a neutral spine.

Deviation from this alignment signals poor posture. That often looks like hunching over forwards, with the head jutting out in front of the body. With poor posture your spine is overly curved, your shoulders are slumped forward, and your neck is sharply bent. Once these unnatural physical shapes become habitual they turn into Forward Head Posture kyphosis (commonly known as Dowager's Hump.)

There are two types of posture: dynamic and static. Dynamic posture describes your alignment while moving, and static describes your posture while sitting, standing, or sleeping. Both have far-reaching and surprising consequences on your body, mind, and well being.

A study published in the journal Health Psychology examined how a slumped or upright posture affects stress responses. Seventy-four participants were assigned to either slumped or upright seated posture, then administered several tasks and assessments.

The upright participants maintained their self-esteem, positivity, speed, and focus. The slumped participants proved to be more negative and less engaged. The researchers concluded that sitting upright is a symbol strategy to build resilience to stress and create a positive emotional state.1

Brazillian scientists conducted a study to determine the prevalence and causes of neck pain. They interviewed 600 individuals and gathered information about their lives, physical condition, and habits.

They found a correlation between poor posture and neck pain. This was especially true when the respondent's job required them to remain seated for long periods.2 The study included the following about the dangers of poor seated posture:

“The sitting posture in occupational activities — associated with poor postural habits, ergonomically unsuitable environments, and psychosocial factors — increases the activity of the neck extensor muscles and the sternocleidomastoid by about 35%. There is also an increase in internal pressure on the intervertebral disc core, an increase in compressive load on neck ligaments, joint capsules, and other structures of the cervical spine. This contributes to the development of inflammations in musculoskeletal structures associated with painful symptoms, as well as neck pain.”2

A study on the prevalence and causes of neck pain found an association between engaging in occupations that require sitting and neck pain. Poor seated posture can stress and damage muscles, ligaments, joints, and vertebrae, causing inflammation and neck pain.

Body posture is a good communicator of how you're feeling. Remarkably, your posture also influences how you feel. A study published in the journal Biofeedback found that good posture increased participants' perceived arm strength. When participants slouched, they felt weaker and were less able to resist downward pressure exerted by another person.3

A remarkable 98 percent of participants felt their arm was stronger when they stood up straight.3

This result underscores the complex relationship between our brain and our body. Something as simple as the way we stand can radically alter our ideas about our abilities. <a href="https://saveourbones.com/these-8-myths-about-aging-are-completely-wrong/" target="_blank"Ideas we have about ourselves can cause us to limit what we're capable of, or to fail to reach our full potential, as this study shows.

When you maintain good posture, you provide feedback to your brain that helps you perceive yourself as strong and capable.

A study found that slouching makes people feel that their arms are weaker and less able to resist downward pressure than when they stand up straight. Standing up straight helps you to feel strong and capable, allowing you to reach your maximum potential.

4. Slouching Can Cause Fatigue

A slumped posture is a sign of depression. It turns out that adopting an upright posture can help increase positivity and reduce fatigue.

Researchers confirmed the power of posture through a study with 61 participants experiencing depression. They had participants either sit normally or upright and then assessed them as they responded to a series of prompts.

All participants started with a slumped posture. The ones who were asked to sit upright for the test showed less fatigue when compared with their baseline posture. Additionally, the upright group showed more positivity and less anxiety.4

A study examined the relationship between smartphone usage, posture, and respiratory function. Fifty healthy volunteers were split into two groups. Half used a smartphone less than four hours a day and the other half used one for more than four hours per day.

The researchers examined each participant to assess their posture and respiratory health. They found that the group with prolonged smartphone use tended to have more forward head posture and more rounded shoulders.5

That group also had a poorer respiratory function. The researchers concluded that the bad posture caused by extended smartphone usage was impairing the participants’ ability to breathe.5

6. How Bad Posture Hurts Your Bones

The effects of bad posture on your spine increase the risk of fracture.

A study of 596 women with a mean age of 71 years found that 18% had hyperkyphosis. Kyphosis is an excessive outward curvature of the spine. It is a severe postural problem. The condition has been linked to poor respiratory function, reduced physical function, and increased mortality.6

Researchers found that the women who had developed kyphosis were at increased risk of fracture, compared with those who had more normal posture.6 Although kyphosis is sometimes congenital or results from an injury, postural kyphosis is correctable.

By improving your posture, you can reduce your chance of fracture.

Researchers found that women with kyphosis– a severe outward curvature of the spine– have an increased risk of fracture. Improving posture can reduce this fracture risk.

If you've been having any of the issues above or if you don’t have good posture, get started on working to improve it. It will make a surprising difference! You can build the strength and physical awareness needed to change your posture using SaveTrainer.

SaveTrainer is the Save Institute's platform for on-demand posture-improving video workout classes. With SaveTrainer, you can create a customized plan that focuses on your specific needs, whether that's improving your posture or other fitness goals.

So make the commitment to start working on improving your posture. As you do that, you will notice that you’ll experience beneficial changes in your body and your mood.