Can Calcium Cause Brain Lesions, Kidney Stones, And Heart Attacks? - Save Our Bones

Can Calcium Cause Brain Lesions, Kidney Stones, And Heart Attacks? 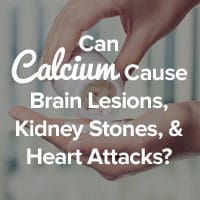 If you’ve been diagnosed with osteoporosis or osteopenia, chances are you’re taking calcium supplements. But it turns out that taking the wrong kind can have serious health consequences.

So today, I share with you three scientifically-proven facts about the very real dangers of calcium supplementation.

And of course, I’ll show you how to supplement with calcium safely.

Let’s start with calcium’s effect on the cardiovascular system…

Researchers wanted to investigate the question of whether or not calcium supplements raise the risk of cardiovascular problems. They analyzed multiple studies where participants over the age of 40 were given 500mg or more of calcium daily. The study does not say what kind of calcium was used, but it does note that Vitamin D was not co-administered with the calcium. Researchers looked at “self reports, hospital admissions, and death certificates.”1

The data brought them to a disturbing conclusion:

“Calcium supplements …are associated with an increased risk of myocardial infarction.”1

Also noted in the study is the widespread use of calcium supplements in the general population, adding to the disease burden of the population at large.

The fact that calcium supplements can cause heart attack should certainly give the osteoporosis community pause. But it’s important to consider some key points.

First, the type of calcium makes all the difference. Typical calcium supplements contain inorganic calcium (carbonate, citrate, dolomite, di-calcium phosphate, tri-calcium phosphate, coral, oyster shell or bone meal). Only a small amount of this “rock” calcium gets absorbed, so the remainder gets lodged in tissues where it doesn’t belong (such as the heart).

Second, the amount of calcium matters. Large amounts of inorganic calcium (participants took 500mg or more in the study) cannot be assimilated by the body. As noted above, only a small amount of this calcium is processed.

The more rock-like calcium you take, the more ends up in various body tissues…and not just your cardiovascular tissue, as you’ll learn next.

In a very large, comprehensive study lasting 12 years, researchers followed the dietary calcium intake and calcium supplementation of 91,731 nurses, aged 34 to 59. None of the nurses had ever had kidney stones prior to the study.

During the 12-year study, 864 nurses developed their first kidney stones, and scientists noticed something intriguing, since the most common stones are made of calcium bound to either oxalate of phosphate. The study results showed that the higher the nurse’s dietary calcium intake – that is, obtaining calcium from foods – the less likely they were to get kidney stones. Conversely, nurses who took calcium supplements were 20% more likely to get kidney stones.

“The study’s investigators conclude that a high intake of dietary calcium reduces the risk of kidney stones but supplemental calcium increases the risk.”2 [emphasis added]

This is important. Obtaining calcium from foods actually makes it less likely you’ll develop a kidney stone, and here’s why.
Dietary calcium binds with oxalate in the gut and also in the urine, thus forming a compound that cannot be absorbed. If your dietary intake of calcium is low, this allows more free oxalate to be absorbed in the gut and excreted via the urine. For those who form calcium oxalate kidney stones, reducing dietary calcium would therefore increase stone risk.

“Restricted calcium intake results in increased urinary oxalates, a risk for stone formation This is a proposed cause of the association between reduced calcium intake and increased supersaturation of calcium oxalate. …Clearly, strong research evidence now supports adequate calcium intake for patients who form kidney stones.”3

“[…] men with a history of calcium oxalate stones found that a normal calcium, decreased sodium, and decreased animal protein diet was more effective for reducing stone events than was a restricted calcium diet. So, adequate calcium plus decreased sodium and protein intake had a significantly more protective effect against stones than decreased calcium intake alone.”3

If you are following the Osteoporosis Reversal Program, then you know it emphasizes the importance of getting calcium from foods. In addition, the 80/20 pH-balanced diet recommended in the Program is low in table salt and animal protein. So the Program helps protect and strengthen your kidneys as well as your bones, and it does this in various ways.

Not only does the 80/20 diet help protect against the formation of kidney stones, as noted above; it also offers a non-pharmaceutical approach, so you can avoid dangerous osteoporosis drugs and the kidney damage they can cause.

3. The Connection Between Calcium Supplements And Brain Lesions

Alarmingly, supplemental calcium can end up in the brain, potentially leading to the formation of lesions. Brain lesions are associated with dementia, stroke, multiple sclerosis, and a host of other conditions.

It goes on to point out that this effect can happen even with low dosages of calcium:

“The present study demonstrates that the use of Ca-containing dietary supplements, even low-dose supplements, by older adults may be associated with greater lesion volumes.”4

The reason the dietary calcium did not have adverse health effects is clear: calcium found in foods, especially plants, is readily absorbed by the body. Conversely, inorganic calcium supplements are the equivalent of eating rocks, which are simply not a food source. Inorganic calcium just doesn’t absorb into your cells (or your bones) like organic calcium does.

So if you’re taking a calcium supplement, you’ll want to make sure it is the kind you’d find in foods.

The secret is to look for plant-based calcium. When plants take up calcium from the soil (rocks), they convert it into a form they can use (plants need calcium for the growth and development of their cell walls). This is a form that is highly bioavailable to humans and doesn’t cause any digestive distress.

Derived from hand-harvested, living algae, TrueOsteo™ is more than just calcium. Taking calcium in isolation is much less effective than combining it with other minerals, and TrueOsteo™ offers all the minerals found in algae, including magnesium, silicon, and Vitamin D3. (TrueOsteo™ also contains strontium, but only the very small amount found naturally in the algae.)

With TrueOsteo™, it is not necessary to take large amounts of calcium, thanks to its efficient absorption rate.

You’ll find Vitamin K2 in TrueOsteo™ as well, because it contains a protein called osteocalcin that enables calcium absorption.

And TrueOsteo™ is my calcium of choice because it contains not only bone-building vitamins and minerals, but also the cortisol-lowering plant extract Ashwagandha.

Please note that TrueOsteo™ is only available in the U.S., Canada, the U.K., Ireland, Australia, and New Zealand. My apologies to those of you who live in other areas of the world.