Recent Study Reveals How Much Sleep Is Ideal For Your Bones 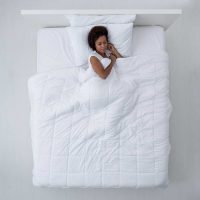 A study has provided powerful evidence for the importance of sleep for bone health.

The human body performs many critical functions during sleep. This is demonstrated by the negative health impacts of getting too little sleep. In fact, under-sleeping has been linked to conditions such as heart disease, obesity, and diabetes.

Today we'll look at data connecting short sleep duration and poor bone health, and delve into the growing understanding of the importance of a good night's sleep.

A study in the Journal of Bone and Mineral Research has directly associated short sleep duration with low bone mineral density (BMD).

The study concluded that for postmenopausal women, getting adequate sleep is an effective means for maintaining bone mineral density, and should be considered as an intervention to improve bone health.1

A study of 11,084 postmenopausal women found that those who slept seven hours each night had significantly higher bone mineral density than women who slept five hours or less, and to a lesser degree, higher BMD than those who slept six hours per night. Getting the right amount of sleep can mitigate bone loss.

This study was performed to follow up on the results of a previous study completed by the same researchers. The prior study concluded that short sleep duration was associated both with recurrent falls and several types of fractures.2

The scientists weren't satisfied with that answer though– they wanted to know why fracture risk increased.

The results of the new study indicate that reduced bone quality is to blame. The researchers point to the cycles of bone remodeling as an explanation. During sleep, the cells that deposit new bone (osteoblasts) and remove old bone (osteoclasts) spring into action, improving bone quality.2

When we don't get enough sleep, osteoblasts and osteoclasts don't get the chance to do their work– leading to lower BMD, bone quality, and increased fracture risk.

A previous study by the same authors linked short sleep duration to increased risk of falls and fracture. The new study found that bone loss is caused by insufficient sleep, likely because bone remodeling takes place during sleep.

Sleep For Your Bones And Your Brain

It's not just your bones that remodel during sleep. Recent studies have shown that brain neurons undergo a process of removing synapses while you slumber– effectively editing your memories to make the important ones easier to find.

Studies on the brains of mice have found that during sleep, certain proteins activate during sleep and prune away unneeded synapses. This neural upkeep creates clearer memories of important information.3

When you don't get enough sleep, your brain doesn't have the opportunity to maintain its synaptic network, which explains the foggy confusion that often follows a sleepless night.

Researchers found that the brain eliminates unnecessary synapses at night to improve memory and cognitive function during the day.

A Path To Better Sleep

The studies above resoundingly concluded that sleeping for seven hours each night is essential for maintaining bone health, brain health, and overall wellness. One healthy habit to help you meet that goal is a regular exercise routine.

The Save Institute's new digital platform for guided exercise, SaveTrainer, has workouts specifically designed to improve sleep. SaveTrainer offers motivating instructional videos featuring certified trainers and custom exercise plans to help you take advantage of the specific benefits you're seeking from your workouts.

The right workout can build bone by directly stimulating the bone remodeling process, can also help you to get the sleep you need to support optimal bone health, and much more.