Olympic Athlete Fractures Bones: Does She Need Osteoporosis Treatment? - Save Our Bones 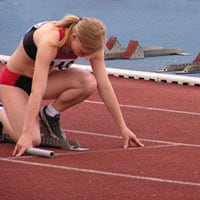 You surely know by now that it really makes me happy to share experiences, comments and opinions with you either by phone, by email and in person. One of the most common topics of conversation is about the bone density test results – specifically, the magical T-score number that causes a barrage of stressful emotions.

When somebody asks me about their “number”, my response is invariably focused not on that particular number, but rather on two very important points. First and foremost, I explain that the T-score is a flawed determination of the actual condition of our bones because it is based on arbitrary guidelines (more on this later). Next, I mention that regardless of the T-score, statistics show that most people never break their bones.

And finally, I predictably go on to say that regardless of its density, when a bone is hit in a certain way, it’ll break. Here’s a perfect example:  Abby Wambach, a member of the US Olympic soccer team, fractured both her tibia and fibula (the two bones that make up the lower leg) on July 16th during a game against Brazil, and will miss the 2008 Olympics.

But wait a minute…Could 28 year old Abby, who was named U.S. Soccer’s Female Player of the Year for 2003, have osteoporosis or osteopenia? That would most certainly explain why a consummate athlete would fracture bones…

Of course not! Abby collided with another player and fell down hard on the floor, and common sense dictates that the impact is what caused her fractures. We will most certainly never read in the news that Abby’s bones might be weaker than normal and that she has decided to “take action” and get a bone density scan.

And it’s just as well… Dr. Susan Love, clinical professor of surgery at the David Geffen School of Medicine at the University of California, Los Angeles says: “We’ve convinced people that you’ve got to have a certain bone density or you’ll have fractures and horrible things will happen to you, but bone density is only one aspect of bone health. It just happens to be the one we can measure.”  Indeed, what a shame we can’t measure bone flexibility!

And here’s the kicker (pun intended): Dr. Love goes on to mention that most people who suffer hip fractures have normal bone density.  So why is it that as we age there is so much emphasis on bone density rather than on overall bone health, you might ask?

The answer is quite simple: because, as Dr. Love mentions above, it is the only aspect of bone health that can be measured. Hence it can be studied, and the results produce statistical comparisons that will ultimately benefit Big Pharma.

Here’s a brief history of the T-score, and how its creation coincided when long-term Hormone Replacement Therapy was deemed too dangerous to simply tackle bone health.

In 1994, a World Health Organization (WHO) working group proposed that, in epidemiologic studies, osteoporosis could be determined when bone density at the hip, spine, or forearm is 2.5 standard deviations or more below the mean for healthy, young, adult women (a value defined as the T-score), or when a history of a fracture is present in the absence of trauma.

The group also proposed that osteopenia be determined when the bone density was 1.0 to 2.5 standard deviations below the mean for young, healthy women (Osteoporosis in Postmenopausal Women, US Department of Health and Human Services.) These guidelines were rapidly adopted worldwide.

Somehow, the fact that the public doesn’t know anything about the “young and healthy women” used as the example of a perfect score never created a stir. But what we do know is that from then on, most of us were condemned to fail the bone density test.

And then Fosamax came to the rescue in 1995, like a knight in shining armor, hastily converting the bone health landscape for years to come.

I’ve devoted an entire chapter of the Osteoporosis Reversal Program to discuss the dangers of the drugs currently used to treat osteoporosis, so there’s no need to rehash now. But here’s a new and important twist that most doctors will never tell you: should someone have the misfortune of breaking a bone while taking Fosamax or any other bisphosphonate, the recovery period may be much longer than if they would not be taking the drugs.

According to orthopedic surgeon Jonathan Cluett, “bone is constantly in a state of turnover, even when not damaged or injured. We continually absorb and replace the cells that make up our bones. Because of this natural turnover, the process of healing bone also comes about quite naturally.”

It is a fact that bisphosphonates alter the normal bone turnover, therefore actually delaying the healing process and, in some cases, potentially increasing the risk of complications. So now you are aware of one more good reason to stay away from Fosamax, Actonel, or Boniva…and one more good reason to be happy that your bone health does not have to depend on these dangerous drugs.

Stay strong, smile often, and until next time.