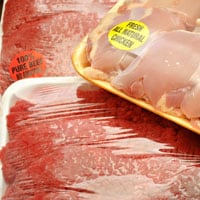 Savers know that animal protein is not emphasized in the Osteoporosis Reversal Program. But what you may not know is just how damaging a high-protein diet can be.

In fact, it’s been scientifically proven that excessive animal protein, which includes dairy, meat, and eggs, not only causes bone loss. It also damages the liver and kidneys, vital organs for healthy bones and overall health.

But there’s more to this story, so today I share with you five top reasons why you should avoid too much animal protein.

First, I want to go over the healthful benefits of plant proteins.

If you have ever decided to go vegetarian or vegan, chances are you were a little worried about how you’d get enough protein. You see, there’s a mainstream myth that the only “real” protein is found in meat, poultry and the like, and that if you don’t eat those foods, you’ll become weak and unhealthy. But nothing could be further from the truth!

According to the FAO's 2009 report “The State of Food and Agriculture”, the consumption of animal protein in the form of meat was a staggering 279 lbs per person, per year in the United States (the third highest in the world, after Luxembourg and Hong Kong).

While the Osteoporosis Reversal Program does not promote vegetarianism, animal protein is recommended in small amounts. Too much protein creates an acidic body environment, causing bone loss and, as we’ll soon explain, vital organ damage.

Animal protein is assimilated fairly quickly, because your body does not have to build it from individual amino acids. But this quick utilization is not necessarily beneficial. On the contrary, slower synthesis is more healthful, allowing the body to “custom”-assimilate the protein you need from the various amino acids. And plant proteins provide a far greater variety of amino acids for your body to work with.

And unlike animal protein, plants are alkalizing. Plus don’t forget that plants contain an enormous number of essential, bone-rejuvenating Foundation Supplements and antioxidants, making plants a much more “complete” bone-building package.

So while eating a moderate amount of animal protein is fine, there’s just no need to load up on it. And science proves that there are many reasons to avoid it. We’re going to look at the top five of them next.

5 Ways Protein Harms Your Bones And Your Health

1. The Link Between Animal Protein And Cancer

As far back as 1982, researchers were searching for a link between cancer and animal protein, which was later conclusively shown. Cancer of the breast, prostate, and colon are especially implicated in connection with animal-based proteins. This is of particular concern for those over the age of 50, as a recent comprehensive study shows.

According to the 2014 study published in Cell Metabolism,

“Respondents aged 50–65 reporting high protein intake had a 75% increase in overall mortality and a 4-fold increase in cancer death risk during the following 18 years.”1

Interestingly, the concern shifted from cancer to diabetes in all age groups assessed:

“…high protein intake was associated with … a 5-fold increase in diabetes mortality across all ages.”1

The digestion of protein is a demanding process that becomes more difficult as we age. Large amounts of hydrochloric acid and pancreatic enzymes are required for animal protein to be broken down and assimilated. Digestion in general tends to become less efficient as we grow older, so this makes it even more of a challenge for older adults.

Even healthy protein digestion produces harmful and mostly acidifying byproducts such as uric acid, urea, and adenine (to name a few), because the body tries to convert protein to a carb-like energy source. Too much of these byproducts cause harm to the liver, kidneys, bones, and digestive tract. Speaking of your kidneys…

It’s no secret that kidney disease is rampant in Western societies. In fact, if you have functional kidneys past middle age, it’s considered exceptional in some medical circles. One of the big culprits behind kidney disease is too much protein, and here’s why.

Your kidneys remove excessive acid from your system, and as noted above, acidic byproducts occur when protein is metabolized. High protein intake means your kidneys get overworked and stressed as they try to keep up with the toxic, acidic overload. As a result, kidney damage and malfunction can occur, and the excess acid can cause painful conditions like arthritis and gout.

4. Your Body “Knows” That Proteins Are Not Carbohydrates

Swapping out carbs for animal protein is a popular weight loss trick. Carbohydrates are the body’s primary energy source, and when people try to “trick” the body by denying it carbs and feeding it animal protein, their bodies simply won’t buy it.

Eating animal foods instead of carbohydrates creates an imbalance in the system. This can cause intense carb cravings, to the point that any weight loss that may have occurred is regained.

The Osteoporosis Reversal Program is based on the concept of balance – nutritional, physical, and emotional. Denying an entire group of bone-healthy foods in favor of an acidifying animal protein just doesn’t make any sense. Imbalances always create health problems.

Your body has metabolic requirements for calcium that must be met. Calcium will be removed from your bones when all other available buffers has been used up, which occurs quickly when when you eat a lot of animal protein.

You see, calcium is an alkalizing mineral, and it’s required in large amounts to balance the acidic environment that occurs with protein ingestion.

In contrast to fats and carbs, animal protein contains nitrogen. When the body converts protein into energy, it extracts the nitrogen from the amino acids that make up the protein, which sets the stage for ammonia accumulation in the blood. Ammonia is a highly toxic substance which must be filtered out by the over-taxed kidneys.

An insightful study published in the American Journal of Clinical Nutrition notes that a diet with a higher proportion of animal protein to plant protein increases bone loss and the risk of hip fracture.2 Conversely, the study points out that,

So What’s The Best Way To Decrease Animal Protein In Favor Of Vegetable Protein?

The answer is simple: prepare and enjoy pH-balanced dishes that are rich in vegetable-based proteins. This is where the companion cookbook to the Osteoporosis Reversal Program comes in: Bone Appétit. With over 200 pH-balanced delicious recipes, it guides you through the process of planning and preparing bone-building meals for breakfast, lunch, dinner, and even dessert.

If you already have Bone Appétit, then you know how it, along with the included 30 Day Meal Planner, greatly simplify the process of preparing meals that rejuvenate bones and bring your system into the proper pH balance.

And balance is the key to healthy bones and overall well-being and vitality; imbalance is implicated again and again in bone loss and disease.

The good news is, it’s easy and fun to delve into the world of Bone Appétit for you and your family.

2 Sellmeyer, Deborah E., et al. “A high ratio of dietary animal to vegetable protein increases the rate of bone loss and the risk of fracture in postmenopausal women.” The American Journal of Clinical Nutrition. January 2001. Volume 73, No. 1, pp 118-122. Web. https://ajcn.nutrition.org/content/73/1/118.abstract