The Doctor Who Thinks You Should Stop Taking Vitamins: Is He Right? - Save Our Bones

The Doctor Who Thinks You Should Stop Taking Vitamins: Is He Right? 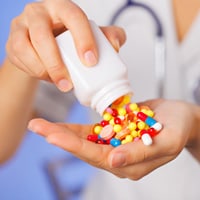 Every now and then, the Mainstream Media reports some health-related news that reminds me of how necessary it is to keep digging deeply to bring out the truth, and how important it is to share it with you.

This month, the New York Times published an article authored by Dr. Paul Offit, warning about the dangers of “large quantities” of supplemental vitamins. Today, we'll dissect Dr. Offit's claims and try to get to the truth.

But first, here’s an example of why it's prudent to take warnings such as his with a grain of salt: eggs were once promoted as healthful, then demonized as unhealthy, then placed back on the healthy list! Dietary fats are another illustration of a once-shunned nutrient whose benefits are now being touted as good for you.

What are you supposed to think?

Of course, I am not here to tell you what you’re supposed to think. Instead, I am committed to presenting truthful information so you can think for yourself. And part of that involves uncovering flaws in certain “scientific studies”.

You see, when study flaws are glossed over, it results in short-sighted conclusions and less-than-truthful health information. And this applies to bone health as well.

Yes, that’s right – the mainstream media is now advising not to take vitamins. The article reports on a number of studies and reviews from 1994 to 2012 that, apparently, indicate that supplemental nutrients cause disease and even death.

“In a study published in The New England Journal of Medicine in 1994,” reports The New York Times, “29,000 Finnish men, all smokers, had been given daily vitamin E, beta carotene, both or a placebo. The study found that those who had taken beta carotene for five to eight years were more likely to die from lung cancer or heart disease”1,2

Even more alarming (it would seem) are the results of a 2004 study that showed supplemental doses of vitamins A, C, and E, beta carotene, and selenium increased mortality.3 A 2012 Cochrane review indicated similar results: beta carotene and Vitamin E actually appeared to increase mortality among participants.4

The problem, reports the article, is antioxidants.

Something is said to be a paradox if the same evidence produces conflicting conclusions. And information about antioxidants is definitely paradoxical.

I devote an entire chapter to antioxidants in the Osteoporosis Reversal Program, because they are so crucial to bone health. Antioxidants work to eradicate free radicals from the body. Free radicals are the by-product of normal cellular respiration, and they cause oxidative damage that hurts your bones (and other tissues and body systems). That’s why your body has an antioxidant system in place.

Yet some research seems to suggest that free radicals actually have some health benefits, and problems can arise if antioxidant levels circulating in the blood are too elevated.

Making Sense of it all: Flawed Studies

As we put what appears to be contradictory information together, let’s begin with the studies used in The New York Times article.

The key to the study’s flaw lies in the phrase “randomly assigned.”

It was completely up to chance as to who got which supplement or none at all. While the study reports that those participants who took the beta-carotene were more likely to die of lung cancer, there was no correction made that would allow for varying lifestyle habits, such as diet and exercise. We have no idea what other potentially lethal habits the “random” supplement-takers had, or what other environmental toxins they were exposed to. Did they have asbestos in their homes, for example? Did they have an occupation that involved breathing toxic vapor or dust?

In other words, there were plenty of other factors besides the beta-carotene supplements that could easily have tipped the scales in favor of developing lung cancer. There just wasn’t enough information to draw the conclusion that beta-carotene increases lung cancer risk.

Note, too, the unspoken conclusion of the study: that those who did not take the antioxidants – the participants whose free radicals were allowed to run amok, so to speak – were actually healthier, leading to the incorrect conclusion that there are health benefits in letting free radicals roam unchecked.

But we don’t have any information on the lifestyle practices of the participants who did not take the antioxidant supplements either; perhaps they exercised regularly or ate antioxidant-rich diets. There are a number of factors that could have influenced their outcomes as well. It’s ridiculous to take the data from this study and assume that elevated levels of free radicals have some kind of health-promoting properties.

In the 2004 study I mentioned earlier, wherein Vitamin E supplements supposedly increased mortality rates, the flaw is evident in the study’s limitations: “High-dosage (> or =400 IU/d) trials were often small and were performed in patients with chronic diseases. The generalizability of the findings to healthy adults is uncertain.”3

Giving relatively large doses of Vitamin E to a few chronically ill participants presents very specific data. It’s quite a stretch to apply these results to the general population.

The 2012 Cochrane Report Fares No Better

Here’s why. Healthy participants were lumped in with those who were chronically ill without making allowances for the differences. There are so many unanswered questions with this study. Could the seemingly healthy participants have undiagnosed conditions? How did the chronic illness of some participants affect the outcome? Without answering these and many other questions, conclusions drawn from such a study really can’t mean anything.

All of the Studies and Reports Share a Common Flaw

In addition to all the flaws noted above, there is one glaring fault that all of the research has in common: none of the studies make any mention of the type of supplements used.

Regular readers are aware that your choice of supplement can make the difference between help and harm. Some are bioavailable and some are completely inorganic. Take calcium, for example. Algae-based calcium supplements are highly absorbable, but calcium carbonate is basically ground up rocks that your body can’t use. And calcium carbonate supplements can do more harm than good.

This simple principle applies to all vitamin and mineral supplements. You just can’t expect healthy results from an inorganic, non-bioavailable product.

Isn’t it interesting that nutritional balance is just as important as physical balance in promoting good health and strong bones? It all comes down to keeping things in a state of equilibrium.

When you get confused and wonder what to believe about the latest health news, just go back to the balance principle. Mega-doses of any supplement are not a good idea, and neither is rejecting all supplements.

Instead, make the balanced choice as outlined in the Osteoporosis Reversal Program: eat healthy, antioxidant- and nutrient-rich foods in a balanced ratio of 20% acidifying and 80% alkalizing, and supplement with quality, bioavailable Foundation Supplements. It’s really quite simple if you look at it from that point of view.

In fact, the Osteoporosis Reversal Program defines osteoporosis not as a disease, but as a condition arising from an “unhealthy biochemical imbalance.” Our bodies compensate for this imbalance by utilizing calcium from our bones. Osteoporosis is your body’s attempt to tell you that it’s off-kilter.

The Program takes you step by step through the process of achieving this, with exercise tips, extensive food lists, Foundation Supplement information, and much more. And it’s all backed by scientific research.

With the Osteoporosis Reversal Program, you’ll always be one step ahead of the “hype,” and articles like the one in The New York Times won’t knock you off balance.