These Two Supplements Can Hurt More Than Help Your Bones - https://saveourbones.com

These Two Supplements Can Hurt More Than Help Your Bones 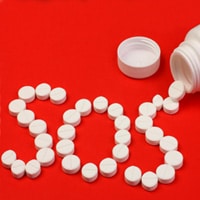 Could you be taking two supplements that are harming your bones? You might think there’s no way, but think again. Shockingly, these two supplements are considered to be essential for bone health – even by the Medical Establishment – and doctors routinely recommend and prescribe them to their osteoporosis and osteopenia patients.

Today, you’ll find out if you’ve been taking them, and if so, what you should take instead.

The supplements in question are actually crucial to the health of your bones. However, the difference is in their formulas. These two superstars of the osteoporosis world work synergistically with each other, so it’s vital that both of them are taken in a form your body can use. And while they may need no introduction in name, we do need to introduce the formulaic differences among supplements of…

If you were prescribed Vitamin D and/or calcium by your doctor, then chances are you were given the wrong formula. Here’s why:

When doctors prescribe Vitamin D – usually after blood tests show a deficiency – it’s almost invariably D2, also called ergocalciferol. And when Vitamin D is added to foods to “fortify” them (such as cow’s milk, for example), it’s always D2. But all Vitamin D is not the same.

Vitamin D2 is far less effective than Vitamin D3. It’s not absorbed well by the body, but Mainstream Medicine continues to treat Vitamins D2 and D3 interchangeably. This study from The American Journal of Clinical Nutrition couldn’t be more clear in its conclusion about the inferiority of Vitamin D2:

“Despite an emerging body of evidence suggesting several plausible explanations for the greater bioefficacy of vitamin D3, the form of vitamin D used in major preparations of prescriptions in North America is vitamin D2. … Vitamin D2, or ergocalciferol, should not be regarded as a nutrient suitable for supplementation or fortification.”1

In the above study, it was revealed that D2 and D3 do not follow the same metabolic pathway as previously thought. In addition, D2 was shown to be quite unstable, and prone to toxic contamination due to the way it’s manufactured. “Vitamin D2 is synthetically produced from irradiation of ergosterol derived from the mold ergot”1 the authors state in the study. In contrast, “vitamin D3 is manufactured in a similar manner to that which occurs naturally in human and animal skin.”1

How Vitamin D is Supposed to Work

Interestingly, Vitamin D is also a hormone. So it has some interesting regulatory roles in the body as well. It regulates the calcium and phosphorous in bone remodeling and helps maintain blood calcium levels. In addition, Vitamin D stimulates calcium absorption in the intestine.

In the liver, your body forms a precursor to Vitamin D. This precursor reacts to sunlight to form Vitamin D3 in the skin. The D3 is then further processed in the liver and kidneys to form a hormone.

This is yet another reason why it makes sense that Vitamin D3, derived from natural sources, is the supplement of choice.

Typically, doctors will tell those with low bone density to “take calcium” or “drink milk.” But they make no distinction between the organic forms of this mineral and the inorganic. And chances are, prescribed calcium is inorganic. Now, don’t get me wrong. The body can effectively utilize small doses of inorganic calcium, but when doctors prescribe or recommend calcium, the dosage is typically around 1,000 mg a day.

The most common calcium supplements are made of carbonate, citrate (which is easier to digest than carbonate), dolomite, di-calcium phosphate, tri-calcium phosphate, coral, oyster shell or bone meal, and all variations of amino-acid chelated calcium (which are the most bioavailable of all the above forms of calcium). While they may have different names, they all have one thing in common: they are all inorganic.

This kind of calcium is not easily bioavailable, especially in large quantities, which most likely explains its association with increased risk of heart attack.

Calcium Carbonate is an Industrial Mineral

Calcium carbonate is also widely used as an industrial mineral. Some interesting information from the Industrial Minerals Association of North America shows just how “industrial” calcium carbonate really is. It’s produced from marble, quarry rocks, or by mixing carbon dioxide with a solution of calcium hydroxide. It’s more compact than chalk, making it even harder for your body to break down and use. In fact, here are some of the ways calcium carbonate used in industry:

Needless to say, this is not something we should put into our bodies!

A note about eggshells – they are not an organic form of calcium; they are 95% calcium carbonate.

When it comes to bone-nourishing supplements, the Osteoporosis Reversal Program goes well beyond calcium and Vitamin D. Aside from explaining the most bioavailable, non-harmful forms of these two bone health staples, it also shows you the scientifically-backed data that confirms…

While Mainstream Medicine wrongly focuses exclusively on calcium and Vitamin D (secondary to osteoporosis drugs, of course), the data clearly shows that many other micronutrients are absolutely necessary to build your bones. Boron, manganese, zinc and Vitamin B complex are just a few examples of Foundation Supplements.

The Program gives you the most effective, safe formulations for each, all backed by scientific evidence, leaving no stone unturned.