WARNING: Eating This Way Could Unknowingly Decrease Your Bone Density 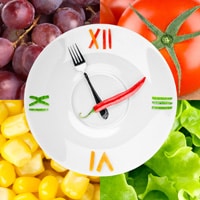 Today’s post looks at the important yet seldom (if ever) mentioned role the hormone ghrelin plays in bone health. Known as the “hunger hormone,” ghrelin is a peptide produced by the digestive system in response to low blood glucose and low glycogen.

So what’s the link between this hormone and your bones? Amazingly, ghrelin has been scientifically proven to increase the number of bone-building cells called osteoblasts, thus helping increase your bone density.

A Closer Look At Ghrelin

As mentioned above, ghrelin is also called the hunger hormone because while its functions in the body go far beyond feeling hungry, regulation of appetite is one of ghrelin’s primary tasks.

When your blood glucose levels are low, a neurotransmitter called Neuropeptide Y (NPY) in the hypothalamus is stimulated. NPY then communicates with ghrelin, increasing its production and stimulating your appetite.

Then when you eat, insulin levels increase, as do levels of a chemical called cholecystokinin (CCK). CCK is produced in the intestinal lining and “switches on” feelings of being full. In turn, increased insulin and CCK cause reduced ghrelin levels. Simply put, when you feel full, ghrelin levels are low. When you’re hungry, they’re high.

It’s amazing the complexity of the cellular response to something that seems as simple as feeling hungry or full!

There’s another peptide involved in this process: leptin. It acts in direct opposition to ghrelin, increasing when ghrelin decreases and vice versa. Leptin is stimulated indirectly by the presence of food in the digestive tract (directly by CCK), and signals your appetite to decrease so you stop eating.

If you never allow yourself to get hungry, then you don’t give ghrelin levels a chance to go up.

When the effect of ghrelin and its receptor, a growth hormone known as GHS-R1a, was studied in rats, researchers found both ghrelin and GHS-R1a within osteoblasts. In addition, the rats’ bone mineral density increased.1

This means that ghrelin is directly responsible for increasing the number and activity of osteoblasts, the cells that build bone, thus increasing bone density.

It’s Good To Be Hungry Before You Eat

If you tend to “graze” throughout the day and find that you never really feel hungry, your ghrelin levels are likely staying low. To stimulate more of this bone-building hormone, you need to wait a few hours between meals so you actually feel hungry before eating.

There are more easy ways to stabilize your ghrelin levels and optimize its bone building capabilities.

Eating lots of alkalizing fresh fruits and vegetables, getting a modest amount of lean animal protein, and taking in plenty of healthy fats are essential nutritional steps for keeping blood sugar stable and alkalizing the body. This is precisely the nutritional emphasis described in the Osteoporosis Reversal Program, and it’s just the kind of nutritional plan that optimizes ghrelin levels.

As described above, insulin influences ghrelin, and if your blood sugar spikes your insulin levels do too. This “switches off” the ghrelin.

Hold Off On Refined Sugar

Eating too much sugar poses a host of health problems including bone loss. Even if you’re eating a healthful, bone-building diet, your bones won’t get all the nutrients you’re taking in if you are also ingesting lots of sugar. And of course, sugary foods send your blood glucose levels up quickly, producing the spike described above. This will undermine your bone-healthy diet.

Interestingly, fructose, the kind of sugar found in fruit (not to be confused with High Fructose Corn Syrup), does not affect ghrelin levels. So a diet rich in fruits, like the one described in the Osteoporosis Reversal Program, will not cause ghrelin levels to “yo-yo” the way refined sugar does. This is good news, since just about all fruits are alkalizing and contain many bone-healthy nutrients.

Ghrelin is more than just a “hunger hormone.” It stabilizes glucose homeostasis, but it also reduces the activity of the sympathetic nervous system. According to research, this means that ghrelin improves chances of survival in case of a heart attack.2 Amazingly, ghrelin also prevents muscle atrophy because of its ability to induce muscle differentiation (basically, it stimulates the formation of muscle cells).

Now that you know this, you can easily realize that the nutritional scope of the Osteoporosis Reversal Program is multi-faceted and broad.

It effectively builds bone density in many ways, as scientific research continues to reveal more aspects in which a balanced, alkalizing diet, rich in Foundation Foods, is necessary for the health of your bones and your whole body.