Watch This Drink 'Melt' Calcium Before Your Eyes - Save Our Bones

Watch This Drink ‘Melt’ Calcium Before Your Eyes 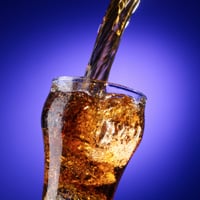 My first car was an old brown Mercury that had the annoying habit of breaking down when I needed it most. One day, as I was getting ready to drive from New York University to Northern New Jersey where I lived at the time, I put the key in the ignition, but the car just wouldn’t start.

Luckily, a fellow student offered me his help. He noticed that the battery cables looked very rusty and suggested that I buy a cola at the corner coffee shop and simply pour it on the battery. I was quite incredulous, but for the 50 cents that it cost back then, I figured I had nothing to lose. I poured the drink on the battery and waited a few minutes. Much to my amazement, after a little hesitation, the car started.

Indeed, the phosphoric acid in the cola worked its magic on my corroded battery connectors. Little did I know back then that the same drink that solved my car problem can wreak havoc on your bones and your body.

In this incredible demonstration you can watch how cola can literally melt your bones away (disregard the typos):

As I write in the Osteoporosis Reversal Program, drinking acidifying cola – both diet and ‘regular' – is a very bad idea if you want to take care of your bones and increase their density. What’s more, I write that the acidic cola “attack” is so severe that,

Please share this post with family and friends so they too will know the dangers of drinking cola.