Why Dr. Weil Is Dead Wrong About Fluoride - Save Our Bones

Why Dr. Weil Is Dead Wrong About Fluoride 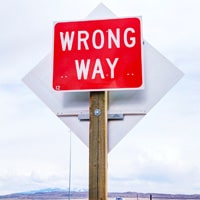 I have to admit, I found this to be truly shocking.

Here’s what happened. I have received emails from several Savers regarding Dr. Andrew Weil’s differing opinion on fluoride. While I respect him for being an advocate of natural health and commend him for doing a lot of good, I vehemently disagree with his stance on fluoride.

The dangers of fluoride ingestion are scientifically backed. It’s a fact, not hearsay, that fluoride harms your bones and your health.

So I am surprised that Dr. Weil continues to recommend using fluoride as a ‘healthy’ additive to water and toothpaste.

He has even gone so far as to say that “concerns about fluoride are overblown.”1

Nothing could be further from the truth. If anything, we’re not sounding enough of an alarm.

Dr. Weil Refuses To Accept Evidence That Fluoride Is Harmful

In a 2002 Q&A, Dr. Weil addressed the issue of drinking fluoride. He claimed that the addition of fluoride to the public water supply prevents tooth decay. He even went so far as to blame bottled water for increasing the risk of cavities in children, and recommended using fluoride-containing toothpaste.

But the evidence clearly refutes these claims.

First of all, fluoride is toxic, period. It is the nature of the substance; drinking more may increase the toxic effects, but it doesn’t make it more or less toxic in nature.

Secondly, adding fluoride to municipal water systems does not actually prevent tooth decay. In fact, the opposite is true. (I’ll explain in more detail later.)

Thirdly, fluoride in toothpaste is just one more source of exposure to this harmful substance. Some swallowing of toothpaste is inevitable, and moreover, the mucous membranes of your mouth are capable of absorbing materials directly into the bloodstream.

Even the mainstream media has caught on to the dangers of fluoride, publicly calling into question the practice of adding fluoride to the public water supply.

In 2009, Dr. Weil was asked again about fluoride, and he declared that his views had not changed despite new evidence that fluoride was shown to cause cancer in dogs and bone cancer in children.

Fluoride Is So Dangerous That I Regularly Warn Savers Against It

I think it’s so important to get the word out about fluoride that I wrote the Osteoporosis Hydration Protocol, a report on the dangers of fluoride in drinking water. This detailed report is included free with the Osteoporosis Reversal Program, because I felt it was crucial to inform Savers of the detrimental effects of fluoride on bone health and overall health.

Here are some of the scientific facts that will help elucidate why Dr. Weil is wrong.

Fluoride weakens bone and increases fracture rates. As far back as 1975, studies show that the experimental use of fluoride to treat osteoporosis destroys bone integrity and strength. Vertebral, pelvic, and femoral fractures were the most commonly reported types in the studies, and many of the fractures were spontaneous (without any actual trauma to the bone).

“…fluoride treatment can increase the risk of hip fracture in osteoporotic women,”2 a 1989 study concluded.

There have been countless studies on fluoride showing the same trend of weakened bones and increased fracture rates between 1975 and 2002.

Ready For This? Fluoride Is Not Even Good For Teeth!

It amazed me to learn that way back in 1957, Konstatin K. Paluev, an engineer of research and development, gave a presentation that exposed the falsehood of the the claim that fluoridated tap water reduces dental decay by 65%. Paluev declared this a “statistical illusion,”4 because it was based on very young children whose teeth had not even come in! The original investigators claimed non-existent teeth as cavity-free teeth.

And once the children who were observed in the original investigation actually got their teeth (the fluoride itself may have caused a delay in tooth eruption), the rate of cavities was the same as those in non-fluoridated areas.

Very devious, but unfortunately, the notion that fluoride in tap water prevents cavities is persistent among the majority.

Evidence against compulsory fluoride exposure goes back even further. In 1937 (yes, you read that right!) a study was published showing a connection between the incidence of dental cavities and low Vitamin D levels.5

Researchers observed that the incidence of cavities rose in the winter and fell in the summer, and…

…“The marked effect of vitamin D, however, together with observations on the effect of season and exposure to ultraviolet light lend much support to the thought that the calcium-phosphorus-vitamin D interrelationship plays a specific role in processes of tooth growth and preservation.”5

Considering that the FDA classifies fluoridated toothpaste as a drug, this is yet one more piece of evidence that nutrition, not drugs, are what leads to optimal dental, bone, and overall health.

Last But Not Least, Fluoride Is Extremely Harmful To Your Overall Health

When I wrote the Osteoporosis Reversal Program, I recognized the importance of a whole-body, whole-person approach. A healthy body is vital for building strong bones, and fluoride undermines some very important body systems.

I mentioned above that the FDA actually classifies fluoride toothpaste as a medication. Isn't it appalling that drinking tap water means you’re ingesting medication without your consent!

Regardless of what Dr. Weil and others may say about fluoridated tap water, I firmly maintain that it’s a bad idea. Distilled water with a few drop of lemon juice is the purest, most bone-healthy form of water that you can drink.

If you want to avoid hauling heavy containers home from the store, I encourage you to consider the Waterwise 8800. It’s a countertop distiller that I use in my own home, and I am absolutely delighted with the results.

And if you haven't yet, I encourage you to learn more about the Osteoporosis Reversal Program which goes way beyond just fluoride and tap water. It will become your ultimate resource and step-by-step ‘how-to' guide on how to rebuild your bones naturally and scientifically. It is my unwavering conviction that arming yourself with scientifically-backed knowledge is vitally important to your bone health. That’s one of my major motivations here with Save Our Bones.

One Final Thought On Fluoride

When I recently visited southern Colorado for a few days, it was hummingbird season. So I decided to put out a feeder with some nectar to attract these beautiful birds. When I read the label on the nectar bottle, I realized that it made a curious claim.

See it for yourself – here’s the picture of the bottle I got. Look at the text below the white arrow: 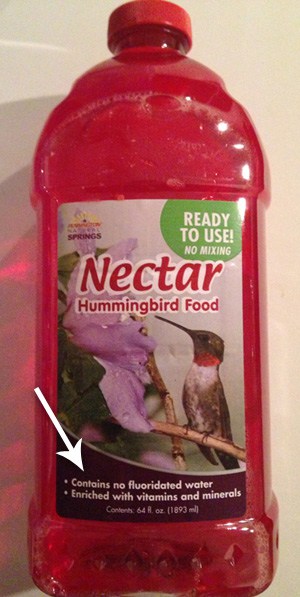 So at least we can rest assured that the hummingbirds won't be consuming fluoride!