7 Facts You Didn’t Know About Calcium - Save Our Bones

7 Facts You Didn’t Know About Calcium 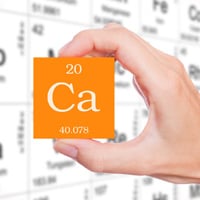 Today, I’m thrilled to share with you seven facts about calcium that you may not know, and that could make a big difference in the way you benefit from this crucial supplement.

1. The name “calcium” is derived from Latin.

Calx or calcis is Latin for “lime.” This makes sense since calcium is extracted from limestone, and also from marble and chalk. Of the elements that make up the earth’s crust, calcium is the fifth most abundant one.

In nature, calcium is never found in its pure form; its molecular structure causes it to attach itself to other elements to form compounds. This is why you usually see calcium referred to with another element in the name: calcium carbonate, calcium citrate, calcium sulfate, and so forth. Because of this binding characteristic, calcium is used in industry to remove oxygen, sulfur, and carbon from alloys.

Phosphorus, which is found in acidifying foods and beverages like soft drinks (phosphoric acid) and cow’s milk, also has an detrimental effect. The debilitating effects of phosphorous on bone are well-documented – the jaw disease known as osteonecrosis of the jaw (ONJ) was once called “phossy jaw” because of its clear correlation with phosphorous exposure. And of course, the most widely-prescribed osteoporosis drugs are phosphorous-based bisphosphonates, which artificially alter bone metabolism, making it brittle and prone to fracture.

This is why the diet described in the Osteoporosis Reversal Program focuses on correcting the acid/alkaline imbalance that is so prevalent nowadays. The pH-balanced Save Our Bones diet emphasizes plant-based calcium sources, which brings us to our next little-known calcium fact.

3. Calcium from vegetables is better absorbed than calcium in cow’s milk.

4. You lose calcium from your bones as you sleep.

Interestingly, calcium loss occurs at a higher rate during the night, with women losing more as they sleep than men. According to a study published in the Journal of Clinical Endocrinology and Metabolism, this may be due to a difference between the sexes’ parathyroid (PTH) levels at night. PTH monitors blood calcium levels, and men tend to increase their PTH production at night, whereas women do not. 2

5. Smaller doses of calcium are best.

While the Medical Establishment tends to prescribe massive doses of calcium as a treatment for osteoporosis (and they often prescribe the wrong kind of calcium – more on that later), your body is actually unable to absorb more than 500mg of calcium at a time. However, you need more than 500mg per day, so that’s why the Osteoporosis Reversal Program recommendation is to spread your calcium intake throughout the day.

It’s also necessary for the proper functioning of muscles and nerves, and amazingly, calcium facilitates communication between the brain and every part of your body. Calcium also plays a role in your circulatory system by mediating the expansion and constriction of blood vessels (vasodilation and vasoconstriction).

And here’s another important function of calcium: it helps with the release of insulin and stabilizes and optimizes various enzymes.

In short, calcium affects the functioning of your entire body.

7. Overconsumption of calcium carbonate or any form of inorganic calcium can cause major health problems and unpleasant side effects.

The irony is, calcium carbonate is the form usually prescribed by doctors; but it’s one of the least absorbable forms of this mineral, and therein lies the problem. Another commonly prescribed form of inorganic calcium is calcium citrate.

When calcium carbonate is ingested, very little is absorbed into your bones, especially if other synergistic minerals and vitamins (such as magnesium and Vitamin D) are not consumed in proportion to the calcium. That’s why large amounts taken in isolation are particularly dangerous – it simply increases the amount of unabsorbed calcium in your body. This excess calcium then gets deposited in soft tissues, contributing to the formation of kidney stones, artery blockage, and the development of hypercalcemia.

Additionally, consuming excessive inorganic calcium can cause side effects such as nausea, gastrointestinal discomfort, constipation, fatigue, and a general feeling of weakness.

The vast majority of kidney stones are composed mostly of calcium oxalate, leading researchers to believe that calcium supplements contribute to kidney stones. However, as I mentioned above, calcium from food sources does not cause kidney stones. That’s because the calcium in foods is organic, and therefore bioavailable.

So Should I Take Calcium Supplements Or Not?

While food sources are ideal, it’s nearly impossible to get all the calcium you need from food alone, especially if you want to build your bones. It comes down to finding the right calcium supplement – one that’s bioavailable, organic, plant-based, and doesn’t come in a high dosage.

In fact, one of the most asked questions I receive from ‘Savers' involves which calcium supplement they should take. Here's what I recommend…

TrueOsteo is a plant-based organic calcium supplement that is easily absorbed, and the daily dose is only 800mg. It’s derived from marine algae, and contains additional Foundation Supplements like magnesium, Vitamins D3, K2, and other bone-building nutrients.

In addition to the minerals and vitamins, TrueOsteo contains plant extracts such as Ashwagandha (which reduces bone-damaging stress), Amla fruit (an excellent food source of Vitamin C), and cilantro and chlorella algae (detoxifiers).

I was very impressed when I first tried TrueOsteo and read the ingredients, and I was also pleased with the one-year, money-back guarantee.

TrueOsteo’s manufacturer has agreed to offer to the Save Our Bones community a 20% discount.

Click here to learn more and enter the coupon code SAVEOURBONES at the checkout page.

Please note that TrueOsteo only ships to the U.S., Canada, the U.K., Ireland, Australia, and New Zealand. My apologies to those of you in other parts of the world.