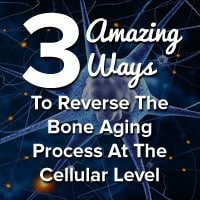 Today we’re going to delve into a fascinating subject: epigenetics, the study of gene expression (active and inactive genes).

You’ll learn about the process of methylation and how it contributes to the aging of your body, including your bones, because of its effects on your DNA. Most importantly, you’ll learn how to “turn it off” with three scientifically-proven yet simple steps.

First, let’s explore what happens at the cellular level as we age.

Although most of us think of aging as the body “wearing out,” aging is actually a biologically active process that begins at the cellular level.

As if responding to an internal clock that programs our lifespan, our cells begin to stop dividing and even die. DNA becomes impaired, and mutations – particularly of the genes involved in DNA maintenance – accumulate. Stem cells cease to proliferate, and mitochondrial function becomes impaired.

The DNA replication process often includes a mistake or two, and DNA repair mechanisms exist to correct for these mistakes. But as we age, the number of mistakes that slip through the repair mechanisms begins to accumulate. As noted above, the genes involved in maintaining DNA mutate, making them less effective at correcting mistakes.

Just What Are These DNA “Mistakes”?

It may seem odd to consider that our body processes are prone to error. But the old adage that “nobody is perfect” extends to cellular processes as well (perhaps “no body is perfect” would be better). Here’s how it happens with your DNA.

During DNA replication – which happens each time your cells replicate and proliferate, such as in bone remodeling – a process called methylation takes place. (Other processes take place, too, but for this explanation, we’re going to focus on methylation.)

Methylation is the addition of a methyl group to DNA nucleotides, and it is not always perfectly replicated. Then proteins must step in and “erase” epigenetic marks to get at the damaged genetic material in order to repair it. These marks may be replaced wrongly, or omitted altogether.

Methylation Marks And Your Bones

Research shows that the process of genetic methylation plays a significant role in the differentiation of bone cells, which, as Savers know, is essential for healthy bone remodeling to take place.

A 2012 study published in Biology, analyzed the role of DNA in skeletal disorders, noting that:

“…osteoporosis is the final result of the complex interplay between genetic and acquired factors in which epigenetic marks may also participate.”1

As previously mentioned, these marks decrease or become impaired over time.

Wait A Minute – Are You Saying Our DNA Changes?

Our actual DNA blueprint – the genotype – does not change. It’s a question of activation. When certain aspects of our DNA are “switched on,” then the phenotype – that is, the biochemical characteristics and physical traits that can be observed – actually change. This is where epigenetics comes in.

Epigenetics refers to gene expression, as I mentioned earlier. Some genes are active and some inactive, but the underlying DNA sequence remains the same. Epigenetic change is perfectly natural and occurs frequently on its own at the cellular level. But it can also be influenced by factors such as age, nutrition, and lifestyle.

Methylation, Epigenetics, And The Biological Clock

Amazingly, your body keeps a sort of “record” of our age. Certain genetic factors get turned on and off as you move into puberty, reach menopause, and experience other developmental milestones. As a matter of fact, your body’s genes are routinely turned on and off inside your cells moment by moment. And methylation plays a role in this process.

Methylation involves the addition of a methyl group, and these additions send a signal for various chemical and neurological factors to leave that particular gene alone. In other words, a methylated gene does not get expressed or activated.

But here’s the good news: you have some control over which genes are switched on and off. It involves influencing methylation, and amazingly, it can be achieved with two vitamins and exercise.

Let’s begin with folate, a B vitamin that is also a Foundation Supplement in the Osteoporosis Reversal Program.

As with all nutrients, there are benefits for your bones and overall health.

The RDA for Folate is 400 mcg/day for adults.

Found primarily in acidifying, animal-based foods (but there are vegetarian sources, as you will see below), B12 is, surprisingly, a crucial vitamin for your bone health.

Whole Body Benefits of B12

Foods That Contain B12

All B12-rich, animal-based foods are acidifying (with the exception of plain, organic yogurt). But there are 3 alkalizing foods that contain B12.

Alkalizing, Vegetarian Foods That Contain B12

The RDA for B12 is 2.4 mcg per day, but you can take much more without any worries, since it’s water soluble. To correct a B12 deficiency take at least 1000 mcg a day for several months.

In addition to getting plenty of folate and B12, there is a third way to influence DNA methylation: exercise.

When scientists studied the effects of exercise on 25 volunteers with an average age of 70, they were startled to discover that the genetic profile of the participants had actually reversed back to younger levels. In other words, their genes fit the profile of someone much younger.7

Remember phenotypes? They are the observable biochemical characteristics and physical traits that result from certain genes being “switched on.” So when researchers noted reversal of aging at the phenotypic level, it means they were able to observe obvious changes in gene expression.

They also noted that:

“…following exercise training the transcriptional signature of aging was markedly reversed back to that of younger levels.”7

Putting It All Together – What Does This Mean For You?

Getting good amounts of vitamins B9 (folate) and B12 and exercising regularly are key factors in turning back the clock on your age.

So when you follow the Osteoporosis Reversal Program and the Densercise™ Epidensity Training System, you’re on track toward reversing the aging process and building younger, stronger bones.

It’s long been known that exercise strengthens bones and keeps you fit. But the revelation that exercising can actually make you younger at the genetic level – the level where aging takes place to begin with – is nothing short of extraordinary.

This is just further proof that you’re never too old to embrace a healthy lifestyle!