Are You Getting Adequate Amounts of This Bone Healthy Vitamin? - Save Our Bones

Are You Getting Adequate Amounts of This Bone Healthy Vitamin? 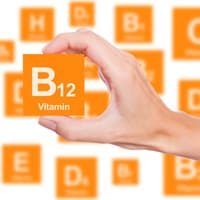 It may be difficult to believe that a vitamin deficiency exists nowadays with the abundance of food all around us. Yet deficiencies of this vitamin are quite prevalent, in part due to the recent epidemic of digestive problems causing a widespread use of acid-blocking medications. And a growing vegetarian population also ups the incidence of this deficiency.

What vitamin is it? It’s vitamin B12, also known as cobalamin. B12 plays a role in a myriad of important body functions, including your bone health.

B12: A Vitamin with Many Roles

Interestingly, the color of B12 when it’s isolated is bright red. This is due to the presence of cobalt in the B12 molecule. Even more amazing is the fact that B12 supports the production of red blood cells – pernicious anemia is the primary way severe B12 deficiency manifests.

B12 is also involved in DNA synthesis and nerve health, and aids cells in protein, fat, and carbohydrate metabolism.

B12 Absorption – an Exacting Process

The absorption of this vitamin is quite complex, involving a delicate interplay between digestive enzymes, hydrochloric acid, and the presence of a particular protein. It’s a process that is subject to disruption and blockage, such as interruptions caused by cobamides. Cobamides are substances that act as a foil to B12 absorption, and they are produced by unhealthy bacterial overgrowth and imbalance in the intestines.

Because absorption of B12 is so particular and subject to blockages, supplements are recommended in addition to eating B12-rich foods. (More on this below.)

How do you know you’re getting enough B12?

Acid-blockers such as those prescribed for reflux and heartburn can also disrupt absorption of B12,2 because you need sufficient stomach acid for proper B12 uptake into your system. As the use of these medications become more widespread, it’s no wonder that B12 deficiency is also on the rise. The minimum requirement is 2.4 micrograms, but in view of the complex absorption process, it’s best to err on the high side. And because it’s a water-soluble vitamin, the body will eliminate what it doesn’t need.

A lack of B12 can cause a host of unpleasant signs and symptoms. Here are some of them:

B12 and Your Bones

Unfortunately, we can add “decreased bone density” to the list of symptoms of B12 deficiency.

In 2005, a group of researchers undertook the study of how B12 affects bone turnover. What they found is a link between low B12 concentrations, high homocysteine levels, low broadband ultrasound attenuation (BUA), and increased fracture risk.3 I’ll explain.

Homocysteine is an inflammatory marker, meaning high levels of this amino acid indicate inflammation in the body. BUA is an ultrasound method used to determine fracture risk, and when it issues a low reading, this means the bone is experiencing a high turnover rate and is more likely to fracture. This study showed that low B12 levels were associated with all of these factors. In short, the study showed that a B12 deficiency increased fracture risk.

B12 and Hip Density

Another study showed that the hips are particularly vulnerable to the effects of a B12 deficiency. Researchers found that elevated homocysteine levels are also a marker for low B12 concentration. Further, a lack of vitamin B12 was implicated in an increased risk of hip fracture.4

Still another study clearly showed the correlation between low B12 levels and decreased hip density. “…low serum vitamin B-12 levels are associated with increased rates of hip, but not calcaneal bone loss in older women”5 the study concludes.

There is more than enough evidence to show how important B12 is in maintaining bone health and building bone strength.

Foods That Contain B12

There are many, foods that can help you get more of this important vitamin. B12 is derived exclusively from animal foods.

Here is a list of foods highest in B12, starting with foods that have the greatest amount:

If you’re familiar with the Osteoporosis Reversal Program, you probably noticed that these foods are acidifying (with the exception of yogurt). Although acidifying foods are not off-limits, upping your intake to get enough B12 may result in an imbalance of the 80% alkaline/20% acidic ratio. The solution? Make sure you take a daily supplement.

What to Look for in a B12 Supplement

As we’ve discussed, B12 uptake is tricky, so if you suspect you have a deficiency, you can request a blood test from your doctor, and then decide on the best dosage. You can get B12 in capsules and also as sublingual.

Also note that most B12 supplements contain a form of B12 called cyanocobalamin. The name is a combination of cyanide – cyan – and B12 – cobalamin. This means the B12 molecule has a cyanide molecule attached. Given the toxic nature of cyanide, it makes sense to look for an alternative, a safe form of B12 called methylcobalamin. (The methyl refers to hydrogen and carbon atoms.) Fortunately, it's easy to find methylcobalamin in just about any health food store or online.

You can also take a B-complex supplement to ensure that you're getting adequate levels of all B vitamins, especially since they're Foundation Supplements. And last but not least, many multivitamin supplements also contain good levels of B-complex vitamins, including B12.