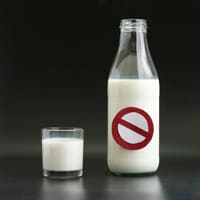 When I visited a friend of mine last week, I noticed a gallon of cow’s milk in her refrigerator.

She saw my expression of surprise, and almost apologetically explained that her grandchildren loved milk, so she had bought it especially for their visit.

But it really pained me to know that she was giving her grandchildren such a toxic concoction.

Fortunately, Savers already know to avoid milk, because it is both acidifying and toxic.

But today you’ll learn how milk damages bones and overall health in multiple seldom-mentioned ways, some of which I’m sure will shock you.

That’s what my doctor told me when he diagnosed me with osteoporosis. But as you’ll see, that advice is dead wrong…in fact, it’s damaging, even if you are part of the minority who is tolerant of lactose.

So let’s look at three reasons why this advice is so misguided, and…

How Your Bones And Health Will Benefit When You Avoid Milk

1. You Will Bring Your Hormones Back Into Balance

Many people assume that if a milk carton claims “no artificial hormones added”, then the milk is hormone-free. The reality is that milk naturally contains many hormones, whether it’s raw, pasteurized, grass-fed, organic, or “hormone-free.” In fact, milk contains some 60 hormones, even if it comes from a cow that’s never been given hormones artificially.

Here are just a few of the hormones present in your glass of milk:

To keep milk production going, dairy cows are routinely injected with recombinant bovine growth hormone (rBGH), an FDA-approved, synthetic hormone that boosts cows’ milk supply. It’s just not possible for a cow to give the amount of milk required to meet the demand without artificial hormonal stimulation.

rBGH causes an increase in the cow’s levels of insulin-like growth factor (IGF-1), which then ends up in her milk. IGF-1 is impervious to pasteurization and even digestion, meaning it is absorbed into the bloodstream virtually unchanged.

In addition, rBGH itself can be present in milk and absorbed, increasing IGF-1 in the human body just as it does in the cow’s body.

As their names imply, rBGH and IGF-1 are intended to grow things (specifically, calves). The problem is, they grow the wrong things in humans – like cancer cells.

Yet another problem with this synthetic hormone is that is makes cattle more susceptible to infections of the udder, which necessitates the use of antibiotics. (More on antibiotics in milk later.) In fact, many dairy farmers who administer rBGH routinely give antibiotics even if no infection is present, paving the way for the development of “superbugs,” or antibiotic-resistant bacteria which then enter the food supply.

Remember, even cows who were never administered rBGH do not produce hormone-free milk. Raw milk, organic milk, it doesn’t matter; all milk is naturally rich in growth hormones because it’s intended to grow calves.

2. You Will Not Ingest Pus Cells And Antibiotics

Your glass of milk contains an alarming amount of pus, and here’s why.

As I mentioned above, when cows are given rBGH, it makes them susceptible to chronic mastitis (an infection of the udder). The prevalence of this disease has given rise to the American dairy industry declaring an allowable number of “somatic cells” (body cells) to be present in milk.

Bear that in mind when you consider this fact: the average number of somatic cells present in American milk is 1,120,000. And most of those are pus.

Here’s another issue with chronic infections and the administration of antibiotics: the antibiotics end up in the milk, and antibiotics actually accelerate bone loss.

3. You Will Reduce Your Pesticide Exposure

The nutrition-based Osteoporosis Reversal Program is full of delicious, bone-rejuvenating Foundation Foods. It emphasizes whole, fresh foods – particularly fruits and vegetables – and I recommend organic, because pesticides are toxic and detrimental to your bones and your health.

And pesticide residue is also present in milk. Yet another way that milk destroys your bones…

According to a 2004 study by the USDA’s Pesticide Data Program (PDP), pesticide residues in milk are alarmingly prevalent and pervasive. Over 95% of the milk samples in the study contained DDE1, a chemical that results from the breakdown of the infamous pesticide DDT, which was banned in the 1970s. Despite the ban, DDT is fiercely persistent in the environment, particularly in soil. The cattle ingest this when they eat hay, corn, grass, etc. grown on land that was once soaked with DDT.

The PDP also found diphenylamine (DPA) in 99% of the samples, an industrial chemical used in the manufacture of certain drugs, plastic, and rubber.1

Dieldrin is another banned pesticide, found in 41% of the PDP’s samples.1

The list goes on to include endosulfan sulfate, which disrupts the endocrine system, and 3-hydroxycarbofuran which is a very toxic byproduct of carbamate insecticide breakdown.1

There are still other poisonous pesticides found in milk… the list is really extensive.

The bottom line is that by avoiding milk, you are steering clear of a major source of pesticide exposure and ingestion.

Personally, I don’t need any more convincing that it’s a myth that cow’s milk is good for your bones.

What About Yogurt, Cheese, And Other Dairy Products?

I know that all dairy products are made from cow’s milk. That’s why, even though plain, organic yogurt is alkalizing, I never recommend eating large amounts of it or any one food. Cheese is acidifying, as are all dairy products that are not fermented and do not contain probiotics. So when you followthe Osteoporosis Reversal Program, you won’t be ingesting a great deal of cheese or any other dairy product.

What About Raw Milk?

Many of you have written in and asked about raw, unpasteurized, organic milk and have correctly pointed out that it is generally less contaminated than processed, pasteurized, homogenized milk. But I still do not recommend drinking milk, and here’s why.

As I mentioned above, all milk contains hormones. Store-bought milk has synthetic rBGH, and raw, organic milk has natural hormones intended to boost the growth of calves…it is not intended for people.

Also, pesticide residue can still be found in organic, grass-fed milk due to the persistence of pesticides in the environment.

Finally, raw milk that is safe and affordable is very difficult to obtain. Without health benefits (and proven health detriments), it’s just not worth it to try to get raw milk, especially when so many delicious alternatives are available (as we’ll see below).

So What’s A Saver To Drink?

In addition to distilled water with lemon juice, bone-healthy lemonade, and other healthful beverages, I drink unsweetened almond milk as a bone-healthy milk alternative.

There are many other nut milks available as well, such as hemp and coconut. You can easily make your own nut milks at home, too, from hazelnuts, cashews, almonds, and so forth – the internet is full of DIY recipes for these wholesome beverages. This is a good choice if you want to avoid sugar and other additives that sometimes make their way into commercial nut milks.

When you make the switch from cow’s milk to nut milks and other healthful drinks, you might be concerned about the build-up of toxins you’ve incurred over the years – and rightfully so.

When I embarked on the Program as my own guinea pig…

I Knew I Had Toxins In My System

They’re practically unavoidable! That’s what I had in mind when I created OsteoCleanse™, The 7 Day Bone Building Accelerator, so I could help those who seek a natural yet scientifically-backed solution to osteoporosis jump-start their bone rejuvenation endeavors.

Through a 7-day process of key foods, beverages, and even breathing techniques, OsteoCleanse™ helps your body rid itself of all kinds of toxins, such as osteoporosis drugs (and other drugs), food additives, and harmful pesticide residue.

These poisons are not only acidifying; many of them are hormone disruptors and deplete the body of key vitamins and minerals needed to build bone.

It only takes a week, and you can do the cleanse whenever you’ve had to take medication or you’ve been exposed to toxins (such as after a vacation when you ate conventionally-grown foods, or when you’ve spent time in an area with a lot of pollution).

OsteoCleanse™ is a revolutionary and pleasant way to rid your body of toxins, renewing your bones and boosting your overall health. I encourage you to check it out today!