3 Unexpected Stress Triggers That Can Damage Your Bones 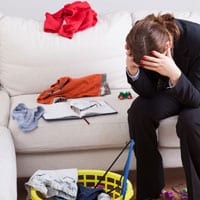 Stress is not only unpleasant; it can damage your bones by keeping cortisol levels elevated. So naturally, it makes sense to avoid it.

Sometimes, that means “exposing” sources of stress that you may not even realize are there, and then doing something positive to overcome them.

So if you’re stressed often and find it hard to pinpoint the root cause, today’s article is definitely for you.

In today’s busy world, it can be tough to keep up with all the things that seem to bombard our everyday lives: junk mail, paperwork, impulsive purchases, and various things we accumulate, sometimes without even realizing. But getting a handle on clutter can help strengthen and rejuvenate your bones, and here’s why.

Mess, disorganization, and clutter actually increase stress, and stress has an acidifying effect on the body. Clutter causes stress in various ways:

How many times have you stopped and looked at the clutter surrounding your work or living areas and spent time fretting over it? Maybe you’re wondering how you’ll ever get out from under so much stuff. Unfortunately, clutter takes up a great deal of mental and physical space.

In addition, clutter is distracting to your senses, causing constant visual, physical, and sometimes olfactory stimulation without relief. You’re brain is constantly processing the clutter even if you think you’ve “tuned it out.” This rapidly becomes mentally exhausting, affecting your cognitive sharpness and destroying your focus.

Clutter can make you feel ashamed of your home or work space, so you don’t feel comfortable inviting friends or family, and you avoid having others see your work area. You may think that the clutter exposes your disorganization, so you feel a sense of shame. This in turn contributes to a feeling of inadequacy and low self-esteem.

In order to really relax, your brain needs to be at rest. Clutter keeps it stimulated, and serves as a stressful reminder that your work never seems to get done.

Too much clutter means little open space, and you need space to be creative and productive. When your living space is a mess, it's difficult to keep your thoughts on track.

How many times have you set something down – a list, a cup of coffee, keys, or important paperwork – only to have it “disappear” in the mess? This leads to a time-wasting hunt to recover the item you need. And that’s time you could have spent on something healthful and productive.

Remarkably, research suggests that clutter can have a negative impact on appetite and food choices. A small study involving 100 college students revealed a connection between the environment, emotions, and eating that hadn’t been noted before.

Emotional eating is not a new concept, of course; but the emotional response to clutter and its effect on appetite is relatively new territory. Researchers divided the students into two groups. One group was placed in a neat and tidy kitchen; the other group was put in a chaotic, cluttered kitchen. Both groups had access to cookies, crackers, and carrots.

The students in the cluttered kitchen ate twice as many total calories as the tidy-kitchen group, particularly if they reported being in a chaotic state of mind. The cluttered-kitchen group ate more of the cookies than the other foods, suggesting that chaos and clutter significantly influence both quantity and quality of food choice.1

“…less cluttered, less distracting, and less chaotic environments may lead people to snack less than they would in a more cluttered and chaotic workplace. Second, even if one must be in a chaotic environment, taking time to recall a more controlled time in one’s life can help one resist the pressure to overeat.”1

This is certainly something to consider as you embark on a nutritious, pH-balanced diet for your bones.

De-cluttering is not necessarily a light task, especially because it bombards your senses. Clutter can seem very overwhelming, but here are some ideas to help you get started.

First, choose an area to clean out, as small or large as you like. It may be a corner in your living room, an area in your closet, a table top, or a section of your kitchen counter. Just choose one, and set a time and date to work on it. You may have to set several times and dates, because it may not be the sort of thing you can do in one session. And that’s okay.

Another idea is to choose several items a day to put away or get rid of. It can be one item a day or ten; whatever is workable for you. The clutter will seem to clean itself over time.

Having the right equipment also helps. Get bins, drawers, boxes, or whatever organizational system fits your space and your needs. And then use them!

Last but not least, don’t be afraid to let go of items. Your local thrift store, second-hand store, or consignment shop are excellent places to unload your extra stuff…just don’t let sentiment get the better of you. If it’s in the way and you’re not using it, it needs to go. Plus, you’ll be helping others, which, as you’re about to see, also boosts your bone health and relieves stress.

It makes sense that being the recipient of rude behavior would be stressed. But did you know that being rude yourself can exacerbate stress? And on the flip side, being polite helps relieve stress.

According to a study published in Clinical Psychological Science, doing small acts of kindness, such as holding a door open for someone, produces positive emotions and contributes to a feeling of well-being. The study authors refer to these kind acts as “prosocial behaviors.”

Study participants gave daily reports as to their mood and stress level for two weeks. They also reported how many prosocial behaviors they engaged in. Interestingly, when stressed-out participants performed more prosocial activities, their mental health and mood improved.

These findings support previous research that points to the healthful benefits of being kind to others.

“…engaging in prosocial behavior might be an effective strategy for reducing the impact of stress on emotional functioning.”2

Make an effort to be polite and kind to people. Interestingly, research shows that honest smiles are contagious, improving your mood and the mood and productivity of people around you.

Given the connection between bone health and mood, helping others is clearly good for your bones. All the more reason to show a little kindness!

There are all types of reasons for procrastinating, and an occasional postponement is quite legitimate. For example, sometimes you have to put off a task or activity because of a schedule conflict, emergency, or simply as a matter of priority. For some people, though, procrastination is a personality trait and therefore a way of life, and that’s a big stressor. Here are the reasons why.

In addition, alarmingly enough, procrastination has been linked to cardiovascular disease and hypertension, in part because procrastinators are slow to take action to better their health.3 And of course, this includes your bone health.

Time management, such as making lists, and planning your day, week or month can really help. But one of the most important things you can do is address the root of the problem: clarifying your vision of your future self. I’ll explain.

Research suggests that procrastinators have a difficult time envisioning this version of themselves. Their future self-perception is vague and unclear, and therefore not motivational.

When scientists studied the data from 583 participants in three different studies, they discovered a clear link between this self-vision of the future and procrastination:

“…individual differences in perceived similarity to one’s future self predicts procrastination such that participants who experienced higher future self-continuity in ten years (studies 1 and 2) and in two months (study 3) reported fewer procrastination behaviors.”4

Therefore, clarity of future vision is important for overcoming procrastination. And you can work on this visualization in the comfort of your own home, according to research published in the Journal of Consulting and Clinical Psychology. Scientists found that internet-based cognitive behavioral therapy (CBT) was as effective as seeing a therapist, and the study concludes that:

“Internet-based CBT could be useful for managing self-reported difficulties due to procrastination, both with and without the guidance of a therapist.”5

With internet resources so readily available, there’s no excuse to not get started!

Are You Putting Off Bone-Healthy Habits?

I sometimes hear from well-intentioned Savers who have the Osteoporosis Reversal Program but they didn’t get started on it yet. Sometimes, this is due to a sense of overwhelm, but I’d like to assure you that even though the decision to reverse osteoporosis with nutrition and lifestyle changes (and without drugs) is a big personal step, it’s not complicated at all.

The Osteoporosis Reversal Program is designed to be user-friendly, and the scientifically-backed, factually sound information is explained in a clear and concise way.

If you haven’t yet, you can start the Program with whatever first steps are comfortable for you. Maybe it’s preparing one alkalizing meal a week at first, just to get a feel for cooking with alkalizing foods. Or perhaps you prefer to get started with a daily or weekly walk.

4 Blouin-Hudon, Eve-Marie C. and Pychyl, Timothy A. “Experiencing the temporally extended self: Initial support for the role of affective states, vivid mental imagery, and future self-continuity in the prediction of academic procrastination.” Personality and Individual Differences. 86. (2015): 50-56. Web. August 9, 2016. https://www.sciencedirect.com/science/article/pii/S0191886915003840