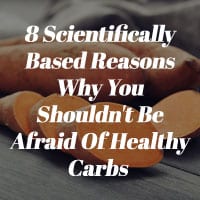 I’m sure you’re familiar with low-carb diets as they've received so much attention in recent years. The idea is to eliminate or greatly reduce carbohydrates from the diet, regardless of their source.

But according to research, indiscriminately cutting out all carbs offers no significant health benefits, and actually deprives your body, including your bones, of vital nutrients. That’s because not all carbs are created equal.

So today you’ll get the evidence-based answers on which type of carbohydrates you should consume and which to avoid, plus how they affect you bones and overall health.

What Exactly Is A “Carb”?

“Carb” is short for “carbohydrate,” a term denoting any molecule that, chemically speaking, consists of carbon, hydrogen, and oxygen. The dietary definition of carbohydrate, however, refers specifically to sugars, such as monosaccharides (fructose and glucose), disaccharides (maltose, sucrose), starch (amylase, amylopectin), and polyols (sorbitol, mannitol).

These are just a few examples of the carbohydrates found in foods.

Carbohydrates are further classified as simple or complex, which is determined by the chemical structure of the food and the speed of digestion and absorption. A simple carb consists of one or two sugars, also called monosaccharides and disaccharides. Because they are quickly broken down in the body and cause an insulin spike, they give you short term energy and satiation.

Complex carbs or polysaccharides have three or more sugars, and also include fiber and starch in their chemical make-up. They cause a gradual insulin spike, helping you to feel fuller for a longer period of time.

As you can see, there is a distinction to be made between carbs, and like dietary fat, not all carbs are bad.

Some Carbs Are Good, And Essential For Bone Health

That’s right – in the 80/20 pH-balanced diet described in the Osteoporosis Reversal Program, you’ll find plenty of high-carb foods, many of which are Foundation Foods. But they are high in complex carbs, not simple ones. And unlike simple carbs, complex carbs contain numerous nutrients you need for bone health.

And that’s the distinction that gives rise to these eight reasons why you should not avoid all carbs.

1. High-Carb Legumes Are Low-Cost And Nutrient-Dense

Legumes include alkalizing Foundation Foods like green beans, lima beans, and green peas; and acidifying Foundation Foods like lentils, chickpeas, kidney beans, and black beans. These foods are rich in bone-healthy nutrients like calcium, magnesium, boron, manganese, Vitamin B-complex, and Vitamin K. Legumes are one of the rare foods that are rich in both protein and fiber, and are very nutrient-dense on a calorie-to-nutrient basis.

And they are remarkably affordable. Relatively easy to grow, harvest, and package, legumes are a very low-cost food that is uncomplicated to prepare. That’s why you’ll find legume-rich diets among the populations of developing countries.

But if you are on a low-carb diet, these nutritious foods are typically off-limits.

2. Gluten Sensitivity Is Not As Prevalent As You Think

The low-carb craze has gotten tied up in the subject of gluten, a rather controversial topic. The connection comes from the fact that gluten is found in highest proportions in high-carb foods (particularly grains), so those on a low-carb diet automatically cut out most gluten. A low-carb diet is a low-gluten one by default.

For the very small proportion of the population with celiac disease and/or genuine gluten or wheat intolerance, a gluten-free diet is essential. But for the vast majority of the population, gluten is simply not a problem, and the adverse reactions attributed to gluten may be due to other food sensitivities and factors.

According to extensive research published in Cellular and Molecular Immunology:

“Gluten is the sole cause of symptoms in only a small subgroup of NCGS [non-celiac gluten sensitivity] patients; in the majority of these patients, multiple food hypersensitivity underlies the clinical picture.”1

So adopting a low-carb diet in order to avoid gluten doesn’t have much benefit for the vast majority of people.

3. Carbs Do Not Innately Cause Weight Gain

Carbohydrates, like fats, take a lot of unfair blame for causing obesity. The claim is that carbs are uniquely able to promote weight gain, irrespective of caloric intake. But the fact is, people groups all over the world have thrived (and still thrive) on diets rich in healthful complex carbs.

From Melanesian people who subsist primarily on coconuts, fruit, and starchy tubers and are “characterized by extreme leanness”2 to the antiatherogenic, beans-and-corn diet of the Tarahumara Indians of Mexico,3 the healthful condition of indigenous people gives no indication that whole-food carbs cause weight gain.

The beneficial effects of fiber are well documented. From promoting digestive health to regulating blood sugar and weight, fiber is considered an important dietary substance. And high-carb foods are full of fiber. (Conversely, low-carb foods like dairy products have no fiber.)

The fiber found in common high-carb foods (like legumes, oats, and sweet potatoes) slows digestion and absorption time, allowing your body to take up nutrients and preventing blood sugar spikes. This characteristic of fiber also helps you feel fuller for a longer time, thus regulating appetite and weight.

And in direct contrast to the notion that carbs are fattening, a five-year study of participants eating high-fiber diets showed a decrease in visceral fat, or VAT (fat concentrated around the heart and other internal organs).

“For each 10 g increase in soluble fiber, rate of VAT accumulation decreased by 3.7%,”4

Fiber itself is composed of carbohydrates; it’s just a type of carb that humans cannot digest. As the study above shows, soluble fiber is of particular benefit.

5. Carb-Cutting Does Not Enhance Athletic Performance Or Exercise Ability

There’s a rumor going around that cutting out carbs improves exercise performance. But the data show otherwise.

In a randomized, single-blind crossover study, researchers followed cyclists who were participating in a 100-kilometer race that included intermittent sprints. They found the cyclists completed the overall race in similar times, but the high-carb group did much better on the sprint portions of the race.5

The researchers conclude that:

Other research supports this same conclusion, with scientists conducting reviews and finding that:

“Carbohydrate feedings prior to endurance exercise are common and have generally been shown to enhance performance.”6

While eating a lot of carbs may not boost your athletic performance, cutting back on carbs is not likely to help, either, and in fact could decrease your performance in sprint-like bursts of exercise. This is important to keep in mind, given the importance of exercise for bone health.

Did you know that the beneficial bacteria in your gut require carbs in order to thrive? You also may not have realized that your bones depend on a healthful community of gut microbes. More and more, scientists are recognizing the crucial nature of healthy gut bacteria, and carbs provide the “prebiotic” substance that probiotics (the good bacteria) feed on.

Research on rats has shown that:

“Prebiotic fibers have promise as a safe and cost-effective means of modulating the gut microbiota to promote improved host: bacterial interactions in obesity and insulin resistance.”7

Again, carbs play a role in healthful weight control by nourishing beneficial gut bacteria, and this is extremely important for maintaining and improving bone health. In fact, scientists are just beginning to discover all the amazing ways that gut flora affect other body systems, with the evidence mounting that the “gut biome” influences every body system, including the nervous and skeletal systems.

Therefore, the ingestion of carbs is good for the whole body, including the bones, by feeding such an influential microbiome.

7. Your Brain On Carbs: No Worries

Inflammation of the brain and a feeling of “brain fog” is said to accompany carb consumption. This may hold some relevance with regard to simple carbs, but complex carbs such as whole grains contain anti-inflammatory nutrients like fiber and magnesium. And if you are following the Osteoporosis Reversal Program, you are already eating plenty of these nourishing foods.

A systematic review of a large amount of data showed that adherence to a Mediterranean diet, which is rich in complex carbs, “was associated with better cognitive function, lower rates of cognitive decline, and reduced risk of Alzheimer disease”8 in the majority of studies reviewed.

Considering that the brain requires glucose to function, it makes sense that anti-inflammatory, nutrient-rich, complex carbs would nourish the brain and nervous system.

In fact, it’s animal foods, not healthful carbs, that increase inflammation. Greater red meat intake is associated with increased levels of biomarkers for inflammation and glucose metabolism10 according to a 2014 study, and several other studies support the same conclusion.

Interestingly enough, the longest-lived populations in the world are those who consume large amounts of complex carbs, such as the Greek island Ikaria and Okinawa, Japan. The inhabitants of Ikaria eat primarily potatoes, whole grain bread, and legumes, and the people of Okinawa consume mostly green vegetables, legumes, and sweet potatoes (almost 70% of their diet was sweet potatoes prior to 1950!).

There are other areas of the world, too, where people commonly live into their 90s and even past the age of 100, and they consume large amounts of plant foods high in carbs. Clearly, carbs are not a problem for these long-lived populations!

So the question is…

Are You Eating Enough Healthful Carbs?

As mentioned earlier, if you’re following the Osteoporosis Reversal Program , the answer is you are. Thanks to its pH-balanced diet, it includes plenty of nutrient-rich, carbohydrate-rich fruits, legumes, and vegetables.

And to facilitate the implementation of the Program’s dietary guidelines, I created Bone Appétit, a companion cookbook to the Program.

Yes, healthful carbs are a big part of the 200+ recipes in Bone Appétit, the cookbook that makes bone-smart nutrition simple and delicious.