Fisetin: The Antioxidant Your Bones Can’t Do Without - Save Our Bones

Fisetin: The Antioxidant Your Bones Can’t Do Without 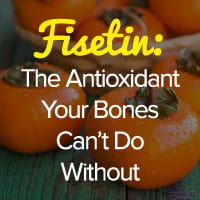 A powerful antioxidant found in several Foundation Foods shows remarkable benefits for bone health. It also offers a host of other benefits, including enhanced cognitive ability.

It’s called fisetin, and the latest research reveals its incredible role in preventing oxidative stress, one of the keys to reversing bone loss.

Fisetin’s benefits go beyond bone health, and today we’re going to take a closer look at the latest research on this amazing nutrient, and which foods contain the highest levels.

Fisetin is a type of antioxidant known as a polyphenol, or plant chemical. Polyphenols cover a broad range of antioxidants, and are largely responsible for the bright colors of certain foods (such as strawberries).

Fisetin belongs to a class of polyphenols called flavonoids (sometimes referred to as bioflavonoids). Flavonoids are not to be confused with flavonols, which sound similar but are actually different.

I’ll explain. Flavonols are a subclass of the bioflavonoid (or flavonoid) group. They have a specific molecular structure, including 3-hydroxyflavone, a chemical compound that forms the “backbone” of all flavonols. Fisetin is a flavonol.

Why Fisetin (And Antioxidants In General) Are Crucial For Your Bones

Calcium and Vitamin D are the first micronutrients that that generally come to mind for osteoporosis. But there is so much more to bone-healthy nutrition than just calcium and Vitamin D! Along with dozens of other synergistic nutrients, antioxidants play a vital role that is often overlooked, and is blatantly ignored by the Medical Establishment.

Nonetheless, antioxidants are essential for bone rejuvenation. That’s why the Osteoporosis Reversal Program devotes an entire chapter (Chapter 12) to the research on these vital plant chemicals.

Here are some of the reasons why antioxidants are a “must” for bones.

Osteoporosis is associated with age, and so is other evidence of oxidative damage, such as wrinkles and sagging skin. Because reactive oxidative species (ROS) or free radicals, are produced naturally as part of normal cellular respiration, they accumulate in the body unless antioxidants “clean” them up.

Antioxidants work by donating an oxygen molecule to the free radical (which has an unpaired oxygen electron, making it “reactive”). But antioxidants can do this without becoming a free radical themselves, making them a crucial factor in bone health. I’ll explain.

Bone cells are not immune to free radical damage. They, too, can be “robbed” of an oxygen electron, thus producing damage to the cells and the bone. Antioxidants neutralize free radicals, arresting the domino effect and preserving the integrity of bones and other body cells. In addition…

In a very direct way, certain polyphenols, such as catechins, actually boost the production of osteoblasts, the cells that build bone. They do this by stimulating the differentiation of osteoblasts, which means more unspecialized cells develop into osteoblasts than into some other type of cell.

That’s not all. Cyanidins, another class of polyphenols, regulate the bone remodeling process by reducing and inhibiting the differentiation of osteoclasts, the cells that tear down bone.

So polyphenols are unquestionably important for bone rejuvenation, and fisetin has specialized roles that are truly fascinating.

Fisetin: The New Flavonol On The Antioxidant “Scene”

Of course, fisetin is not, technically, new; it was actually discovered about a decade ago, but what’s exciting is that scientists have discovered amazing new ways in which this flavonol boosts bone health and overall health as well.

Let’s take a look at the latest scientific research on the many ways fisetin helps fight osteoporosis, and how it benefits many other aspects of health.

Fisetin suppresses the production of inflammatory cytokines. In studies that examined the potency of various flavonoids, fisetin stood out. It was shown to fight inflammation from various angles and metabolic pathways, leading scientists to conclude that:

“These results provide evidence of a novel activity of the flavonoid fisetin that suppresses the expression of T(H)2-type cytokines (IL-4, IL-13, and IL-5) by basophils.”1

Glycation refers to a process where sugar molecules bond to certain proteins and lipids in the body. This results in bone-damaging Advanced Glycation End products, or AGEs. These molecules destroy collagen, a cartilage-like material found in skin and bone, which literally holds you together. Collagen gives bone its tensile strength.

Fisetin arrests the glycation process due to its beneficial interaction with proteins found in the human body, including DNA.2 This accounts, in part, for fisetin’s ability to protect the brain and nervous tissue (more on that later).

Glutathione, also known as the Master Antioxidant, is the only intracellular antioxidant. It’s involved in many crucial biological processes and has the most electrons of any antioxidant, so it can “donate” more of these electrons to free radicals in order to neutralize them.

Found in red wine and the skins of dark-skinned fruits, resveratrol is a powerful anti-inflammatory polyphenol. Fisetin acts as a shield for resveratrol, slowing its breaking down and being metabolized in the liver. Thus, fisetin actually increases the amount of resveratrol in the blood. This is important, given that resveratrol is crucial for bone health – it even helps prevent falls – and has a short half-life in the body, which means it breaks down quickly.4

This is great news for your bones. Fisetin’s ability to reduce inflammation, increase antioxidant levels, and boost tensile strength is quite amazing. But fisetin’s benefits go well beyond bone health.

One of the most remarkable discoveries about fisetin is its ability to stave off Alzheimer’s disease, dementia, and memory loss associated with age – even when the genes for Alzheimer’s are present.

In a fascinating Salk Institute study, researchers genetically programmed mice to develop Alzheimer’s via transgenesis. The mice were divided into two groups: one group received fisetin in their drinking water, whereas the other group of mice did not receive fisetin.

After nine months, the non-fisetin group began to show distinct signs of losing their cognitive abilities. In contrast, the fisetin group exhibited brain function that was comparable to normal mice that hadn’t been programmed to develop Alzheimer’s. And even after one year, the fisetin mice still showed no signs of cognitive decline.5

In the researchers’ own words:

“We show here that oral administration of fisetin to APPswe/PS1dE9 double transgenic AD mice from 3 to 12 months of age prevents the development of learning and memory deficits.”5

It’s thought that Alzheimer’s, dementia, and age-related memory loss are due to oxidative damage to the brain and nervous system. Fisetin’s ability to stave off and reverse this damage is likely at the root of its memory-preserving attributes.

Every cell in the body (except red blood cells) has mitochondria, which are in charge of producing energy that cells use to perform their functions. So these tiny organelles break down carbohydrates and fatty acids and are responsible for cellular respiration and the generation of energy in the form of adenosine triphosphate (ATP).

Fisetin protects the mitochondria and maintains ATP levels even in the face of repetitive oxidative stress and mitochondrial toxins.3

Fisetin also fights cancer by controlling inflammation, as discussed above.

If you’re on the Osteoporosis Reversal Program, then you’re already eating plenty of these fisetin-rich foods:

These foods contain so many healthful nutrients whose benefits are being revealed and discovered every day! And it’s a perfect example of how…

The Osteoporosis Reversal Program Is A Whole-Body, Whole-Person Approach To Health

The focus of the Program is, of course, on building strong and healthy bones. But as you can see, the Osteoporosis Reversal Program goes well beyond bone health. In fact, it helps you to rejuvenate your entire body and feel better.

3 Maher, P. “Modulation of multiple pathways involved in the maintenance of neuronal function during aging by fisetin.” Genes Nutr. 2009 Sep 10.