A Powerful And Natural Way To Prevent The Flu 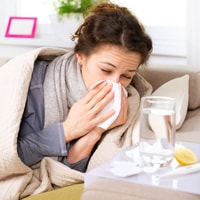 Flu season: most people dread it and are frightened by their doctors and the mainstream media. Especially when, as it’s happening now in the U.S., it has turned into an epidemic. But what if there was a safe, natural, and effective way to fight the flu… and what if this treatment actually tasted good? There is such a way, and it does more than just that. It also helps your bones.

Much of the fear and hype about flu season is misplaced and exaggerated. The vaccine is touted as the end-all and be-all of flu prevention, and the message the media and the Medical Establishment send makes it sound as if you’re in big trouble if you don’t get the flu shot. But this is definitely hyperbole, and sometimes such scare tactics are based on information that is flat-out wrong (such as the erroneous claim that the flu claims tens of thousands of lives a year).

How Effective Is the Flu Shot, Anyway?

As a Save Our Bones community member, you already know that research has shown that the efficacy of the flu shot is poor, at best. And the fact that the flu vaccine is developed from the previous year’s strain, making for a lot of guesswork in the formulation of the current year’s shot, is an added detriment.

But according to the Centers for Disease Control and Prevention (CDC), “Preliminary data for the 2010-2011 influenza season indicate that influenza vaccine effectiveness was about 60% for all age groups combined, and that almost all influenza viruses isolated from study participants were well-matched to the vaccine strains (Unpublished CDC data).”.1 So even with well-matched strains, barely more than half of the population is supposedly “protected” from catching the flu!

And besides, the flu vaccine contains toxic chemicals – acidifying preservatives and stabilizers, one of which (Beta-propiolactone) is considered carcinogenic.

Fortunately, there are many ways to fight the flu without resorting to a dangerous vaccine. Let’s talk about one tasty alternative to the flu vaccine, and how it works.

Yes, yogurt – that creamy, fermented dairy product that is so versatile in the kitchen and enjoyed all over the world. It’s also an important weapon in your battle against the flu virus. And if you’re following the Osteoporosis Reversal Program, you may be eating it often. If so, you’ll be especially glad you are, as you continue reading.

Now when I talk about yogurt, I am not referring to the sugary, sweetened kind that comes in various fancy flavors and colors (such as cheesecake and chocolate mousse). The most healthful, bone-boosting, flu-fighting yogurt is…

It used to be hard to find plain, unsweetened, organic yogurt in the grocery store, but nowadays you shouldn’t have any trouble finding it in the dairy section of your local supermarket. My regular readers already know this, but it bears repeating: sugar greatly compromises the immune system, so eating sugar in yogurt would defeat its healthful purpose.

Why is this fermented food so powerful against the flu?

The reason we get sick is more than just exposure to a pathogen; it’s really the state of our immune system that determines whether or not we get ill. So keeping the immune system in top shape is a significant priority, especially this time of year.

The probiotics in yogurt (the healthful bacteria that cause the yogurt to ferment) actually stimulate the secretion of pro-inflammatory cytokines.2 They are produced by immune cells to amplify inflammatory reactions that will trigger a faster immune response to attack any threat present in the body.

Yogurt has some specifically bone-healthy attributes. For one thing, it is very nutrient-dense, meaning it has a lot of nutrients for each calorie. It is listed in the Osteoporosis Reversal Program as an alkalizing Foundation Food because it’s rich in calcium and zinc. It also contains other bone-healthy nutrients, including vitamins B2, B5, B12 and potassium.

In addition, yogurt contains a substance that…

If you leave yogurt undisturbed, a clear, yellowish liquid comes to the top. Before you eat the yogurt, don’t pour it off – stir it back in! This liquid is whey (which is removed to make Greek yogurt), and it contains a powerful nutrient called lactoferrin.

Lactoferrin is sort of the opposite of bisphosphonates – it affects bone resorption and deposition naturally, actually stimulating the growth and activity of bone-building cells (osteoblasts).5 Notably, lactoferrin also inhibits cytokines, just like the probiotics noted above.

Yogurt sure packs a healthful punch! So here’s a recipe to help you enjoy its wonderful taste and bone health benefits:

Cozy up to the creamy goodness of ice cream in this bone-healthy and immune-boosting treat.

Combine all of the ingredients in a blender or food processor. Blend until smooth.

Place in a covered container in the freezer, stirring the mixture every half hour until it reaches the desired consistency.