Bone Density And Beyond: 3 Amazing Benefits Of Exercise - Save Our Bones

Bone Density And Beyond: 3 Amazing Benefits Of Exercise 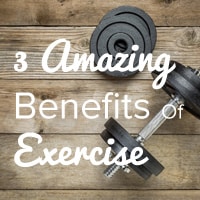 I always feel so much better when I exercise. I have more energy, my mood improves, and I feel younger, too. And of course, I know I'm increasing my bone strength at the same time.

But now there’s fascinating research that sheds light on just why exercise makes us feel so much better, and how important it is not only for bone health, but for quality and length of life.

The research points to three key benefits of exercise in addition to bone rejuvenation, and I’ve shared them below.

One of the effects of exercise is increased muscle mass. Yet amazingly, a new study shows a connection between muscles and longevity.

Researchers at UCLA (University of California Los Angeles) scrutinized data gathered between 1988 and 1994, particularly a survey conducted on 3,659 men age 55 and older and women 65 and older. A follow-up survey in 2004 showed which of the participants died from natural causes, and what researchers found was surprising.

Those individuals with greater muscle mass had a much lower rate of all-cause mortality, indicating that an increase in muscles lowers the risk of death.1

Bear in mind that these were not muscle-bound individuals; the increase in muscle mass was observed using electric current, because it was not obvious from the individuals’ appearance. So when you exercise regularly, you can rest assured that you’re building muscle mass, even if you don’t look more muscular.

2. Exercise Gives Your Brain And Your Mood A Boost

I don’t know about you, but when my mind is sharp I feel exponentially younger. The same can be said for feeling happy – it helps recapture that “carefree” feeling from youth. And now it’s scientifically proven that exercise helps these cognitive issues.

As we age, an area of the brain called the hippocampus begins to shrink, setting the stage for impaired memory. But here’s wonderful news: researchers found that regular exercise actually increased the size of the hippocampus in 120 older adult participants, and corresponding improvements in memory were observed.3

I’ve found this concept to be applicable to the Osteoporosis Reversal Program and as well. Of course, no one is ever 100% consistent; life happens, and sometimes you’re not able to follow the Program perfectly all the time. But if you do the best you can and follow the Program most of the time (and get back on it again if you “fall off” temporarily), then you, too, can enjoy younger bones and a happier outlook.

It came as a bit of a shock to me when I realized that kyphosis is not just unsightly and bad for your bones – it also decreases your quality and duration of life.

In a media statement from March 2014, the United Chiropractic Association (UCA) declared that poor posture is as significant a threat to your health as obesity, pointing out the link between kyphosis and cardiovascular disease. In fact, according to the UCA, elderly people with kyphosis actually have a 1.44 greater risk of mortality than those with correct posture.4

Researchers focused on kyphosis brought on by texting, but regardless of the cause, the bottom line is that being hunchbacked – and its precursor, Forward Head Posture – carry significant health risks.

…when someone drops their head forward and rounds their shoulders, it becomes impossible for them to take a full breath in because of the restriction through the muscles and because the ribs can’t move properly, so the heart and lungs can’t function to their full effectiveness.”4

The good news is, kyphosis is correctable with exercise, so you don’t have to worry about it robbing you of youthful bones.

Science shows us once again that the benefits of exercise go well beyond building bone strength. So when you engage in bone-building, consistent exercise, you’re helping your whole body.

I have always believed that true health involves the whole person. And the above research shows that exercise does just that, incorporating every body system to build and shape a younger you.

I had the whole person in mind when I created the Densercise™ Epidensity Training System as a companion to the Osteoporosis Reversal Program. Although the “densercises” are designed to increase bone strength and posture, science proves that when you Densercise™, you’re doing more than just building bone. You’re reversing the aging process!