New Discovery: The Shocking Link Between Your Brain And Your Bones - Save Our Bones

New Discovery: The Shocking Link Between Your Brain And Your Bones 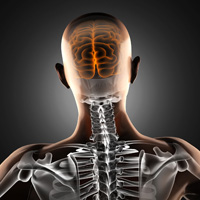 As summer draws to a close, it’s a great time to engage in bone-healthy activities that fit the season such as taking walks to enjoy the colorful foliage.

But shorter days and less sunlight can sometimes make us feel sad and generally “down.” Thankfully, these feelings are transient and don’t typically progress into depression.

As new research sheds light on the brain-bone connection, if for whatever reason you’re feeling down, you could be unknowingly harming your bones.

You see, scientists have now discovered a brand new link between your nervous system and your bones.

And that’s today’s fascinating information I’m thrilled to share with you as well as easy ways to preventing the occasional “blues” from hurting your bones.

The Brain and Bone Connection

Researchers and doctors have noticed that depressed people tended to have low bone density, and they even traced this to a lack of a protein called interleukin 1. But no one knew how or even if depression and bone loss were actually related.

To unravel this mystery, scientists at Hebrew University induced a condition similar to depression in mice. (They did this by injecting a weakened rabies virus into the mice’s femurs, where the virus travels to the brain, causing symptoms of depression.)

When the mice had exhibited signs of depression for four weeks – particularly a lack of participation in pleasurable activities and decreased social interaction – the mice’s bone density was tested, revealing a dramatic loss of bone mass.1

What they found is that depression sets off the sympathetic nervous system that connects your brain and your skeleton. When this system is activated, a substance called noradrenaline is secreted.

Noradrenaline Has a Crippling Effect on Osteoblasts, the Bone-Building Cells

“‘The new findings, which we have discovered in the Hebrew University laboratories, point for the first time to depression as an important element in causing bone mass loss and osteoporosis,’”1 said one of the researchers, Professor Raz Yirmiya.

Since there is such a clear connection between your nervous system and your bones, it stands to reason that a healthful remedy would involve both systems. Fortunately, there is such a remedy…

It’s well-established that exercise helps improve your mood; but scientists in California and Germany found some compelling insights into how this works.

When mice were separated into various groups and exposed to different types of exercise, the mice that used a treadmill actually increased the number of nerve cells in their bodies. “…voluntary exercise results in increased cell proliferation, survival and neuronal differentiation in the hippocampus of adult mice,”2 the study concludes.

Amazingly, the process of making new nerve cells, called neurogenesis, not only happens in children, as it was previously thought. In fact, according to another study, neurogenesis also occurs in the adult brain.3

Isn’t it amazing to know that adults can actually grow new nerve cells in their brains?

Regular Exercise Ties it All Together

Exercise is the element that unites your brain, mood, and bone density. You see, regular weight-bearing exercise, like the moves described in the Densercise eBook System, builds bone density and stimulates neurogenesis.

And the research is clear that such exercise also enhances your mood. The improved mood and stimulated brain then come back around to build your bones in another way, as you read earlier. No doubt, it’s a win-win-win!

Densercise Has What You Need

Simple and easy to follow, Densercise is an incredibly effective exercise program that’s designed to increase bone density. It works best in conjunction with the natural diet and lifestyle described in the Osteoporosis Reversal Program, and takes just 15 minutes a day three times a week.