Catechins: The Polyphenols That Stimulate Osteoblast Differentiation And Much More - Save Our Bones

Catechins: The Polyphenols That Stimulate Osteoblast Differentiation And Much More 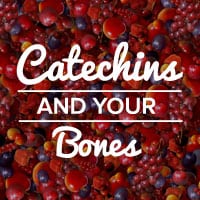 In today’s post you’ll discover that when you rejuvenate your bones through nutrition, you also rejuvenate the rest of your body. Unlike osteoporosis drugs, which always involve a “trade-off” for their perceived “benefits,” eating foods rich in bone-renewing nutrients such as polyphenols helps strengthen your whole body.

We’re going to delve into this research, but first, let’s take a look at…

Just What Are Polyphenols?

Polyphenols are plant chemicals (phytochemicals) that occur naturally in plants as a defense against ultraviolet radiation and pathogens. When consumed, polyphenols have powerful antioxidant and anti-aging effects in the body.

Catechins: A Type Of Polyphenol

Catechins are seldom mentioned when it comes to bone health, but they are no less important than calcium and other vitamins, minerals, and nutrients.

The Special Bone-Building Properties Of Catechins

All antioxidants are good for your bones, but catechins – specifically, epicatechin gallate – have been scientifically proven to have remarkable bone-building properties.

Scientists found that ECG stimulates osteoblast differentiation, which refers to the number of unspecialized cells that will develop into osteoblasts. ECG does this by increasing the expression of osteoblastic marker genes.1 So ECG plays a role in determining which cells become osteoblasts and which ones do not, and the number of active osteoblasts is crucial for bone rejuvenation.

Certain plant foods, many of which are Foundation Foods in the Osteoporosis Reversal Program, contain ECG. The foods that contain the most ECG include:

This is one of many ways the Osteoporosis Reversal Program helps turn back the clock on your bones. When you follow the Program, you’re eating all sorts of ECG-rich foods that renew your bones and your overall vitality, as this fascinating study shows.

What researchers discovered in a 2009 study is nothing short of remarkable:

“Polyphenols or polyphenol rich diets provide significant protection against the development and progression of many chronic pathological conditions including cancer, diabetes, cardio-vascular problems and aging.”2

The study elucidates the cardio-protective effect of catechins, pointing out that these polyphenols “inhibit the invasion and proliferation of the smooth muscle cells in the arterial wall” and may also inhibit platelet aggregation, thus preventing thrombosis.

Polyphenols – including catechins – have anti-cancer effects that also explain their role in longevity and wellness. The researchers report several “mechanisms of action” that account for catechins’ ability to stave off cancer, including estrogenic/antiestrogenic activity, inhibition of cancer cell proliferation, induction of apoptosis (cancer cell death), immune system regulation, anti-inflammatory action, and changes in cellular signaling.2

The study further explains the anti-aging effects of antioxidants like catechins, citing research that points to free radical and oxidative stress as the most widely accepted theory that explains the mechanism of aging. While some oxidative damage occurs under normal conditions, the rate of damage increases with age “as the efficiency of antioxidative and repair mechanisms decrease.”2

The study notes that a diet rich in antioxidants effectively reduces “the deleterious effects of aging.”2 In addition, the researchers pointed out the existence of other studies that show “the combination of antioxidant/anti-inflammatory polyphenolic compounds found in fruits and vegetables may show efficacy as anti-aging compounds.”2

The Bone-Protective Effects Of Catechins Don’t Stop There

As antioxidants, catechins prevent oxidative damage to your skeleton, which can occur over time. The importance of antioxidants is great, yet it’s rarely if ever mentioned by mainstream doctors in the discussion of osteoporosis. The Osteoporosis Reversal Program goes into great detail as to the importance of these phytochemicals, devoting an entire chapter (Chapter 12) to the topic of oxidation and ways to fight it.

The nutritional approach to reversing osteoporosis, as described in the Program, heals and rejuvenates bone from the inside out. What a difference from Mainstream Medicine’s approach, which is to treat osteoporosis as a disease and prescribe drugs that tamper with bone remodeling!

This is yet another way that the Osteoporosis Reversal Program promotes the health and well-being of the whole person. Bone-building foods are also body-building, energy-renewing, anti-aging foods as well!