Cysteine Protects Your Bones From Damaging Oxidation And Keeps You Young 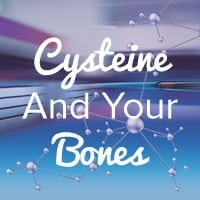 Cysteine is a nonessential amino acid (one of the 20 building blocks of protein), which means it’s synthesized in the body. Yet research shows that most of the population will sooner or later have a cysteine deficiency.

Cysteine is considered one of the principal sulfur-containing amino acids because it is actually incorporated into proteins. And there’s more to cysteine. It is necessary for the production of glutathione, the Master Antioxidant, for the bone-building amino acid taurine, and it is also an effective anti-aging substance.

Today you’ll discover exactly how to get plenty of this anti-aging amino acid so you’ll prevent a bone-damaging deficiency.

But first, let’s start by taking a quick look at oxidation and its role in aging.

Oxidation And The Aging Process

Your cells need oxygen to produce energy, of course; but during these life-sustaining metabolic processes, a very small percentage of oxygen cells lose an electron via the electron transport chain (generated by mitochondria) and become free radicals, or “reactive oxygen species.”

Because of this unpaired electron, the free radicals need stabilization, which they achieve by taking an electron from another cell. That cell, then, becomes a free radical with an electron missing, and it in turn finds another cell from which to steal. So you can see how it is a damaging chain reaction that causes oxidation.

How Does This Vicious Cycle Relate To Aging?

Oxidative damage is one of the forces behind the “symptoms” of aging, such as loss of bone and muscle tone, higher body fat to lean muscle ratio, less efficient immunity, various “aches and pains”, and more.

Free radicals react with all sorts of macromolecules, from lipids to proteins to DNA. Your body has various mechanisms in place to repair and protect your cells from oxidative damage, but it must have the right tools to make that happen efficiently.

It is theorized that aging is the result of the oxidative process overcoming the body’s natural antioxidant mechanisms, causing a gradual decline in cellular integrity.

This is where antioxidants, including cysteine, come into play.

“In several clinical trials, cysteine supplementation improved skeletal muscle functions, decreased the body fat/lean body mass ratio, decreased plasma levels of the inflammatory cytokine tumour necrosis factor alpha (TNF-alpha), improved immune functions, and increased plasma albumin levels. As all these parameters degenerate with age, these findings suggest: (i) that loss of youth, health and quality of life may be partly explained by a deficit in cysteine and (ii) that the dietary consumption of cysteine is generally suboptimal and everybody is likely to have a cysteine deficiency sooner or later.”1

That quote from the study contains so much valuable information. I want to take a look at some of the key points, starting with inflammation.

Inflammation Is Bad For Bones And Overall Health

It’s not new to Savers that chronic inflammation is bad for your bones and for your whole body. Science confirms that inflammation increases the risk of fractures, and bisphosphonates, the most commonly prescribed class of osteoporosis drug, have been shown to increase inflammation (yet another way that bisphosphonates actually make it more likely that you’ll sustain a fracture).

And cysteine lowers inflammation, as shown in the study above.

As we age, the immune response tends to decline. But the above study notes that cysteine “improved immune functions.” A healthy immune system is essential for your overall health – not only is it your first line of defense against pathogens, but it is also regulates your inflammatory response. In fact, a functioning immune system is vital for communication between cells, which is how your body functions on a fundamental level.

Cysteine was noted in the study as increasing plasma albumin levels. Albumin is produced in the liver, and its primary role is to move fluids through the body. This is actually a very important job, because everything from blood pressure to electrolyte balance depends on how efficiently fluids move through the body. Albumin binds to and transports a myriad of substances into and out of cells, such as hormones, electrolytes, enzymes, and amino acids.

Notably, albumin also acts as an antioxidant, scavenging for free radicals and staving off oxidative damage. By increasing albumin levels, cysteine boosts one of the body’s own antioxidant mechanisms.

By acting directly on these processes, cysteine plays a significant role in youth preservation. According to a 2012 report published in the Journal of Signal Transduction,

“Many studies have found that increased oxidative damage in cells is associated with aging.”2

The report goes on to cite lots of evidence confirming that oxidation is pivotal in the aging process. Animal studies have shown a link between stress resistance, reduced free radical production, and increased lifespan.2 Furthermore, studies in mice show a staggering 50% reduction in lifespan among animals that lack key enzymes that repair oxidative damage to DNA.2

Cysteine Is A Precursor Of Glutathione, The Master Antioxidant

High levels of glutathione are associated with long life in humans, and in order to have adequate glutathione levels, you must have an ample supply of cysteine as well. You also need the amino acid glutamine to produce this Master Antioxidant.

How To Get More Cysteine

While the body manufactures cysteine from methionine, the best place to start boosting your cysteine supply is by consuming cysteine-rich foods, many of which are also excellent sources of methionine.

Animal proteins, while acidifying, are rich in this amino acid. The highest amounts are found in:

But take heart if you are vegetarian or vegan!

Cysteine Is Also Found In The Following Animal-Free Foods

With the exception of garlic, all of these are Foundation Foods found in the Osteoporosis Reversal Program.

Sadly, Most Of The Population Is Deficient In Cysteine

Remember the study quote about cysteine reversing many symptoms of aging? That quote contained an especially crucial statement – in case you missed it, here it is again:

“…the dietary consumption of cysteine is generally suboptimal and everybody is likely to have a cysteine deficiency sooner or later.”1

Clearly, cysteine deficiency is widespread, and given all the complex and vital roles it plays in the body, it is no wonder that the ravages of aging are felt so keenly nowadays.

Notice how the best sources of cysteine are also Foundation Foods, which means that when you follow the Osteoporosis Reversal Program you’re doing a lot more than just taking care of your bones.

There’s no doubt that nutritional healing reaches much farther than the mainstream reductionist view held by allopathic medicine, which is simply to isolate symptoms and treat them with drugs. In fact, drugs cause many more problems than they appear to solve (drugs do not actually solve any underlying health problem).

In contrast, nutrition-based healing covers all aspects of health, because every body system needs nutrients to function and thrive. And that includes your bones!