Shock Study: Link Between Deer Antlers And Osteoporosis Discovered - Save Our Bones 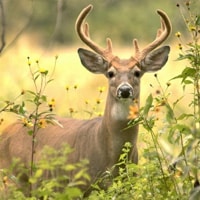 Today, I will let you in on an unusual chain of events that led researchers to discover that after all, there is another mineral besides calcium that plays a crucial role in osteoporosis. And that nutrition matters. I call it an out-of-laboratory experience…

Here’s what happened. The winter of 2005 turned out to be unusually cold in Spain. And on that same year, scientists at the Research Institute of Hunting Resources (IREC) noticed that deers' antlers were breaking at an alarming rate. Nobody could figure out the reason for this strange occurrence.

Fast forward to January of this year, when the study that solved the mystery was published in the Frontiers of Bioscience journal.1 Conducted by a team of researchers from the University of Castilla-La Mancha (UCLM) and IREC, their findings and conclusion will most likely rattle the mainstream medical establishment.

Manganese and a “New” Look at Osteoporosis

The scientists concluded that the fragility and subsequent breakage of the deer’s antlers were linked to low levels of the trace mineral manganese. The trigger was the cold weather, which caused plants and shrubs that deer normally eat to produce a lot less manganese, effectively changing the deer’s diet.

The researchers further postulate that osteoporosis can therefore not be directly linked to just a lack of calcium – something that I’ve been saying for years. But rather, that calcium cannot be efficiently absorbed without the presence of other crucial micronutrients such as manganese.

Tomás Landete, one of the lead study researchers explains that, “Antlers grow by transferring 20% of the skeleton's calcium towards their structure. We therefore saw that it was not calcium deficiency that caused the weakening but rather the deficiency of manganese.”2 What’s more, Tomás and team are finally flirting with the up-to-now ignored truth that calcium loss is a consequence and not the origin of osteoporosis.

With this new evidence from none other than deers’s antlers, mainstream scientists can no longer keep their blinders on. Sooner – rather than later – they will have to acknowledge that there’s more to osteoporosis than bone demineralization that just happens at a certain point in life. And that even though calcium is the most prominent mineral in bones, it doesn’t mean that adding more calcium supplementation and prescribing dangerous drugs will solve the osteoporosis epidemic.

If you have the Osteoporosis Reversal Program, you already know that manganese is a Foundation Supplement because it is essential for connective tissue and protein synthesis. You are also aware of its important role in other aspects of health, including the production of thyroxine, the main thyroid hormone.

And fruits and veggies like artichokes, spinach, and pineapples are just a few of the delicious Foundation Foods listed in the Osteoporosis Reversal Program that contain manganese.

But the Osteoporosis Reversal Program does more. It clearly tells you which are the most important nutrients that nourish and strengthen your bones when present in the body at the same time and in the right proportion and dosage.

So stay “in tune” with your bone health by doing what’s right for your bones and for your overall health.