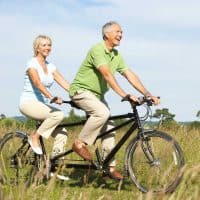 New research has found that people who feel younger than their chronological age experience a variety of health benefits as well as protection from the negative impact of stress. The scientists who published this study have collected clear data that illuminates the power of self-perception.

Today we'll examine this new research, and you’ll find out how to use this discovery to maintain your youthfulness and good health regardless of your chronological age.

The study included 5,039 participants who were part of the German Ageing Survey. This survey consisted of residents of Germany aged 40 and older and covered three areas: perceived stress, functional health, and perceived age. It asked a series of questions that analyzed each factor.

Perceived stress was gauged with a series of questions such as “In the last month, how often have you felt difficulties were piling so high that you could not overcome them?” They answered on a scale from “never” to “very often”.1

Functional health describes the participants' ability or inability to complete ten everyday activities like taking a walk, bathing, or getting dressed.

To record the participants' perceived age the survey simply asked the question, “How old do you feel?”1

The study is based on a survey of 5,039 German participants aged 40 and older. The survey assessed participants perceived stress, functional health, and perceived age.

The researchers charted the data points they gathered from the participants– chronological age, perceived age, perceived stress, and functional health– and then analyzed the patterns that emerged.

A key relationship that the study confirmed is between stress and functional health. The more stress a participant felt, the more likely they were to have a limited ability to perform daily tasks. In other words, if they experienced more stress it correlated to less functionality.1

Furthermore, the limitations became more severe the older the participants were. Stress was more damaging in older people than in younger people.1

Feeling younger than their age provided what the researchers called a “protective buffer” against the negative impacts of stress.1

This is how the researchers described their findings:

The survey results showed that increased stress correlated to reduced functional health. This relationship was more severe in older people than younger people. However, those who perceived themselves as younger than their chronological age didn't lose as much functionality. Feeling young provided a protective buffer against the harmful impacts of stress.

Additionally, they recommend stress reduction as a tool to avoid the loss of functional health. Practices or interventions that help participants to manage and reduce stress will help them to remain independent and physically capable.

Furthermore, the link between functional health and perceived age means that feeling young makes you more likely to be able to engage in the physical activity required to build and maintain bone density.

It turns out that feeling young is another way to protect your bones.

Figure out what makes you feel young, and do it. Maybe it's positive self-affirmations, dancing, or dressing up for an outing.

Another way to feel younger is to maintain your strength and fitness through exercise. The Save Institute created SaveTrainer to make that goal easy to accomplish. With SaveTrainer you can stream bone-building and anti-aging video workout classes to your computer, phone, or tablet on demand. From stress-reducing guided meditation sessions to targeted weight-bearing workouts, it has what you need to put this study's findings into action.

Chronologically, we're all getting older. But you can choose to live your life in a way that makes you feel younger. And that makes all the difference!