Age Is Just A Number? Study Says Yes - Save Our Bones 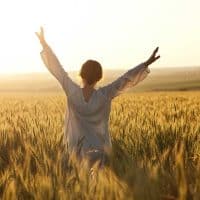 A remarkable study has found that people who report feeling younger than their actual age live longer and healthier lives.

Today, we'll delve into the specifics of that study and proven ways to help you feel younger.

It probably comes as no surprise that the same actions that make you feel younger and live longer can also help you to build stronger bones.

How Old You Feel Impacts Your Health

The study, published in the journal JAMA Internal Medicine set out to determine the associations between self-perceived age and mortality. The researchers’ goal was to elucidate if feeling younger helps people live longer.

To find out, they asked 6,489 participants aged 52 years and older how old they felt. Most of the respondents reported their self-perceived age as three or more years younger than their actual age. Only about five percent felt older.1

Even when the researchers accounted for other predictors of mortality, self-perceived age remained a significant independent predictor. In particular, there was a strong correlation between self-perceived age and cardiovascular death, but no association with cancer mortality.1

Their conclusion was that people who feel younger live longer.

A study of 6,489 people over the age of 52 recorded self-perceived age and health data over eight years. Researchers found that people who perceived themselves as younger than their age lived longer than those who felt older.

Exercise Is The Key To Feeling Young

The researchers who conducted this study closed out the report with an inspiring observation:

“Self-perceived age has the potential to change, so interventions may be possible. Individuals who feel older than their actual age could be targeted with health messages promoting positive health behaviors and attitudes toward aging.”1

Savers are well versed in choosing positive health behaviors. And one of the most important behaviors is regular exercise. Regular physical activity both builds strong bones and has a positive impact on self-perception of age and physical function.

Exercise is one of the most effective ways to improve health and slow the physical changes that accompany aging. Along with this increased wellness comes a change in how we perceive ourselves. When we are fitter, stronger, and more physically capable, we feel younger.

Fortunately, self-perception of age can change through the adoption of positive health behaviors. Regular exercise is a behavior that improves health and makes you feel younger.

A study from 1966 demonstrated just how much power we have for improving our health and our self-perception through exercise. The Dallas Bedrest study examined the results of extreme changes in physical activity. Researchers asked five healthy 20-year-old men to spend three weeks at complete bed rest with no weight-bearing.2

As you might expect, those totally sedentary three weeks had a significant negative impact on the men's cardiovascular health. Their resting heart rate climbed, their body fat increased, their muscle strength declined, and their heart's ability to pump blood plummeted. In fact, the 20-year-olds had developed the physical characteristics of men twice their age.2

At the completion of the three weeks of bed rest, the study subjects followed an eight-week exercise program. Not only did those eight weeks of exercise revert the damage caused by the sedentary period, some measurements were even better than before.2

For a study conducted in 1966 five men were on bed rest for three weeks. Their cardiovascular health declined rapidly. However, eight weeks of exercise restored their health.

Exercise even makes you younger at the cellular level.

A study in the journal Preventive Medicine examined the biological aging markers of nearly 6,000 adults. Researchers asked about the participants' physical activities over the past month and gathered a sample of their DNA. They then compared each participants' exercise levels to the length of their telomeres.3

Telomeres are proteins that cap the ends of human chromosomes. Every time a cell replicates, the telomeres in that cell get a little bit shorter. Telomere length has a direct correlation to life-span. People with shorter telomeres die younger than people with long telomeres.3

The researchers found that the people who exercised the most had 140 more base pairs of DNA at the end of the telomeres than the most sedentary participants. That difference is equivalent to about nine years of cellular aging.3

Our ability to confidently live our lives to the fullest has a major impact on how old we feel. Living with the fear of a fracture can make us feel older and vulnerable.

Fortunately, as it pertains to bone health, exercise helps us to feel younger by strengthening our bones. Weight-bearing exercises stimulate new bone growth, as explained by Wolff's Law. It describes how the pressure of stronger muscles developed from physical activity exerted on bones causes them to respond by adding additional mass.

That's why exercise is a central part of the Osteoporosis Reversal Program.

And Savers know that targeted, weight-bearing exercises build strong and resilient bone mass. When you have strong and healthy bones you can act as young as you feel, confident in the stability of your skeleton.

One of the ways exercise helps you feel younger is by strengthening your bones. Physical activity stimulates new bone growth, as described by Wolff's Law.

Exercise is instrumental to feeling younger, living longer, and building strong bones. The studies we looked at today provide powerful evidence that physical activity is key to living your fullest and longest life. But finding an effective and sustainable workout routine can be tricky.

That's why the Save Institute created SaveTrainer. SaveTrainer provides on-demand workout instruction from trained professionals, and customizable plans for all fitness levels. You can select from a wide variety of workout video classes, including bone strength, joint health, balance, posture, flexibility, meditation, sleep-enhancing, and yoga.

Embrace your ability to extend your life and your good health by making choices that keep you in control of your well-being. If you play an active role in pursuing good health, you'll be able to keep playing that role for years to come.