A New Prescription For Bone Health: Exercise - Save Our Bones 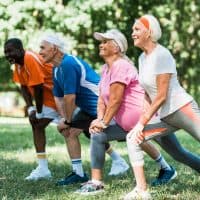 In March of 2015, my mother received a cutting-edge medical intervention that may very well have saved her life.

I went with her to see her doctor for a regular check-up on the week of her 90th birthday. He took her blood pressure and other vital signs. Fortunately, everything looked good. Then, without fanfare, he asked a question I had never heard a doctor ask before. “Do you go on walks?” She said no.

His response was shocking, and as it turns out, ahead of its time. You'll learn what he did a little later, but first, let's expand on his unusual question. He asked about my mother's physical activity– something that most doctors typically ignore.

A Call To Action From Doctors, To Doctors

In 2016 something remarkable happened. A collection of widely respected doctors banded together to expand on what the Medical Establishment prescribes.

They published a special report in the journal of the American College of Sports Medicine. The report called on other physicians to make physical activity assessment and prescription a standard part of medical care.

They begin their call to action by reviewing the 60-year history of growing concern over declining physical activity levels among Americans. Despite actions taken over that time, the U.S population is rife with low cardiorespiratory fitness, and sedentary lifestyles.

These factors are associated with chronic illnesses that have been endemic in the United States. In fact, physical inactivity is a public health crisis.

In response, this group of doctors proposes a new standard practice. This new approach would place exercise front and center in a doctor's most basic assessment of a patient's health. They propose the universal implementation of a Physical Activity Vital Sign (PAVS).

A group of doctors published a report calling for the universal implementation of a Physical Activity Vital Sign (PAVS), as a means to address and reverse the continued trend of sedentary lifestyles among Americans.

The report gives the example of PAVS questions used by a variety of forward-thinking institutions such as Kaiser Permanente and Greenville Health Systems:1

The answers are recorded and considered alongside other data about the patient's health. For patients not meeting the CDC's recommended 150 minutes per week of moderate to vigorous physical activity, a prescription is in order.

Physicians can assess physical activity as a vital sign by asking patients about the frequency and duration of their time engaging in exercise. If patients do not meet the recommended minimum of 150 minutes of moderate to vigorous exercise per week, then the doctors would prescribe an increase in physical activity.

Exercise As A First-Line Treatment

Physical inactivity poses serious and immediate health risks. Physicians have a responsibility to inform their patients of those risks. Then they can give their patients a prescription that could save their lives.

Unlike other prescriptions a doctor might offer, this non-pharmaceutical intervention has only positive side-effects. And unlike any drug, the positive health benefits are numerous. They support a wide array of body systems– including the bone remodeling process.

This is what the report had to say about adopting exercise as a first-line treatment:

“Regular physical activity should be advocated for the prevention and first-line treatment of chronic disease. The default exercise prescription is to walk at least 30 minutes a day, 5 or more days per week, with a target of Q150 minutes per week of moderate-intensity physical activity. It should be noted that any type of physical activity done at a moderate pace would count toward this weekly goal.

However, when previously sedentary patients initiate an exercise program, level walking should be strongly recommended, gradually increasing the walking speed or intensity of exertion over time (2 to 3 months), provided they remain asymptomatic (20). This strategy may decrease the likelihood of injury or cardiovascular event and increase cardiorespiratory fitness. An effort also should be made to recommend activities that people enjoy and will likely continue to engage in over time.”1

The recommendation of this report has been echoed by other medical professionals. Robert Sallis of Kaiser Permanente Medical Center published an editorial in favor of an exercise vital sign which concluded that “such an approach is critical to help stem the rising tide of deaths around the world due to noncommunicable diseases, which are so closely associated with a sedentary lifestyle.”2

The Medical Establishment has continued to resist making a PAVS assessment and prescription standard for physicians across the country. We continue to see the tragic results of sedentary lifestyles.

Exercise should be a first-line treatment for the prevention of the serious health risks posed by physical inactivity. Doctors should ask about physical activity levels and prescribe an increase when necessary. This recommendation for the prevention of unnecessary suffering and death has been echoed by other medical professionals, but the Medical Establishment has not made it a standard of care.

The Save Institute was founded with the knowledge of the power of exercise. That's why it is built into the Osteoporosis Reversal Program, and why we created SaveTrainer. It provides robust support for creating a personalized program of physical activity that ensures that this vital sign is strong in every Saver.

If you haven't already guessed, when my mother's doctor learned that she wasn't going on walks, his response was perfectly in line with the recommendation for a Physical Activity Vital Sign. He pulled out his prescription pad. But instead of prescribing a drug that would have awful side effects and little measurable impact, he wrote a different prescription– one for a daily dose of 30-minute walks.

This past March, my mother celebrated her 95th birthday, and she's doing great!