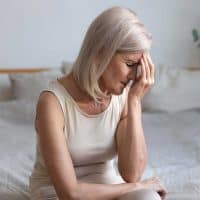 The Medical Establishment has a track record of redefining natural physical processes as diseases. Often, the development of new drugs drives this dangerous pattern.

The Big Pharma companies that own the drug patents wield their influence, turning normal physiological changes into diseases that can only be treated with their products. But over time, this practice has been uncovered through scientific examination.

Today, we'll look at a very clear example of this pattern: the pathologization of menopause. It's a history that Savers will find familiar: it bears a striking resemblance to the invention of osteoporosis and osteopenia and the subsequent creation and prescription of bisphosphonates and other drugs.

Menopause Is Not A Disease

Menopause is a normal process in aging females caused by a reduction in the levels of estrogen and progesterone produced by the ovaries– usually between the ages of 45 and 55. After menopause, the ovaries produce less of those hormones, halting the menstrual cycle.

This hormonal change typically results in hot flashes, trouble sleeping, weight changes, irregular periods, and other symptoms. All of these experiences are normal.

And yet, the natural physical changes that accompany menopause are often treated as if they are the symptoms of a disease. However, that wasn't always the case.

In 1942, the FDA approved a new drug called Premarin that boosted estrogen levels. It was intended as a treatment for women who experienced frequent and severe hot flashes. The drug was effective within this limited scope.1

But then in the 1960s doctors began to prescribe the drug for other reasons. An influential book with the title Forever Feminine argued that menopause was a form of “hormone deficiency” instead of a natural change.

The book's author Robert A. Wilson spread the absurd idea that postmenopausal women are no longer women because of reduced estrogen levels. This unscientific conflation of biology and gender convinced many women to undergo estrogen therapy.

This marked the beginning of the redefinition of menopause as a disease. The Medical Establishment embraced the idea that menopause causes a “hormone deficiency,” even though that reduction in hormone levels is completely natural.1

Menopause is a normal process in females that accompanies aging. Over the course of the 20th century, alongside the emergence of drugs that boost estrogen levels, the Medical Establishment redefined menopause as a disease that causes “hormone deficiencies.”

Hormone Replacement Therapy (HRT) is a pharmaceutical intervention that increases estrogen levels. The drug Premarin was the first and most common drug prescribed for this purpose.

However, in the 1970s, estrogen supplementation was linked to endometrial cancer. As a result, HRT was used less often. Then researchers found that combining estrogen with progesterone reduced the risk of endometrial cancer, and this new version of HRT became popular.1

This popularity was driven by a wave of speculation in the Medical Establishment that HRT provided protection against a wide variety of diseases and conditions, including cardiovascular disease. However, those uses were not approved by the FDA.

Because of the extensive prescription of HRT for unapproved uses (often referred to as “off-label prescription”), the FDA required new studies to test those claims. This new research found that HRT caused an increase in coronary events, including coronary heart disease death.1

Then, in 1991, the Women's Health Initiative (WHI) began. The WHI was the largest randomized study designed to evaluate the effect of HRT on common causes of death and disability in postmenopausal women.

The WHI found increases in breast cancer, heart disease, strokes, and blood clots in the study participants who received HRT. The results were so stark that the researchers stopped the study early, so as not to cause undue harm to the participants1.

The study of HRT continues. Researchers are investigating its effects on more specific age groups and populations to see which deadly side effects are more or less present. But all investigations of HRT are ultimately chasing the same phantom: a treatment for a disease that doesn't exist.

Hormone Replacement Therapy (HRT) is a pharmaceutical intervention that supplements hormone levels, usually in postmenopausal women. HRT's popularity increased after it was marketed as a way to remain “feminine forever” and later, as a way to prevent a variety of health conditions. However, studies found that HRT caused increases in breast cancer, heart disease, strokes, and blood clots.

Aging Is Not A Disease

The changes our bodies undergo as we age are not outside threats to be eliminated. They are natural and normal internal shifts. We should be supporting our bodies, not filling them with chemicals in an attempt to undo our natural biological processes.

When menopause was rebranded as a disease, the result was the overprescription of a drug well beyond its intended purpose.

This pattern of finding a drug and inventing a disease for it to treat is a recurring problem with the Medical Establishment. Big Pharma spends untold millions funding this dangerous pattern and they continue to be successful, so it's up to us to be aware that it's happening.

The changes our bodies undergo as we age are not outside threats to be eliminated. Big Pharma funds the invention of new diseases to profit from drugs created to “treat” them. We must be vigilant to recognize when a natural part of aging is redefined as a disease in need of treatment.

Osteoporosis And Osteopenia Are Not Diseases

Like menopause, osteoporosis is not a disease. Before 1994, a diagnosis of osteoporosis was only given to people who had already experienced a fracture. But the International Osteoporosis Foundation (IOF), under the influence of a corporate advisory board of Big Pharma companies, decided to change that.

They decided that osteoporosis is a disease of low bone density, and the World Health Organization agreed. Their rationale was that reduced bone density increases the risk of fracture.

Then, in 1995, the pharmaceutical company Merck introduced a drug to increase bone mineral density: Fosamax. By changing the definition of osteoporosis, the IOF provided Merck with a new disease to treat.

Then the Medical Establishment found a way to diagnose even more people. They invented osteopenia— a “disease” of reduced bone density that indicates the risk of an increased risk of a fracture.2

All the while, studies clearly indicate that bone density isn't the only or best indicator of bone health or of fracture risk.3 Millions of prescriptions have been written for osteoporosis drugs, even though they have well-documented and horrific side effects.

Much like Hormone Replacement Therapy, a natural part of aging -reduced bone density- was redefined as a disease and used to sell ineffective and dangerous drugs.

Osteoporosis and osteopenia were invented in the 90s after the International Osteoporosis Foundation decided that age-related bone loss was a disease that required pharmaceutical intervention. In fact, bone loss is a natural part of aging and is only one factor of fracture risk– not the sole determining factor. Big Pharma is still profiting from this invented disease.

Don't let the Medical Establishment convince you that you're sick, simply because your body is undergoing perfectly natural changes. You can stay healthy, strong, and independent throughout those changes by making smart choices about diet, exercise, and lifestyle.

Aging, and the bone loss that can accompany it, does not need to be met with a barrage of drugs. The Osteoporosis Reversal Program details a natural, drug-free approach to building stronger bones that can resist fracture and a healthier life.