Everything You Ever Wanted To Know About DXA Scans - https://saveourbones.com

Everything You Ever Wanted To Know About DXA Scans 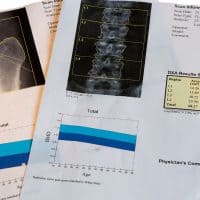 Dual-energy X-ray absorptiometry, or DXA (previously known as DEXA), is the most widely used method of measuring bone density. Other tests such as CT scans, dual photon absorptiometry, and ultrasound may also estimate bone density but are less common. DXA scan results are typically the first step to get an osteoporosis or osteopenia diagnosis.

What Is A DXA Scan?

Dual-energy X-ray absorptiometry, or DXA, also called bone densitometry, is a specialized form of X-ray technology. Whereas a traditional X-ray can visualize bone fractures but has limited ability to estimate bone density, DXA scans are designed to measure bone mineral density (BMD). As a result, medical professionals use DXA scans to diagnose osteoporosis, osteopenia, and other conditions that affect bone density. A newer application of DXA scans includes estimating body composition, such as body fat. But the most common use of a DXA scan is to measure bone density.

Physicians typically recommend that post-menopausal women undergo DXA scans to obtain bone density measurements. For individuals with certain risk factors – for example, those who take medications that are known to cause bone loss (such as glucocorticoids, to name one) and those with a family history of osteoporosis, doctors typically recommend scans at a younger age.1

DXA scans provide a measurement of bone density that doctors use to diagnose osteoporosis and osteopenia.

There are two types of DXA machines: central and peripheral. In most cases, physicians request DXA scans of the lower spine and hips, performed using a central DXA scanner.

In some cases, such as when evaluating bone density in children, the entire body may be scanned. Unlike other forms of imaging, such as CT scans or MRIs, a DXA scan does not require to be placed in a “tunnel” or enclosed space. Instead, a central DXA device looks like a flat, padded table with an arm extended above the patient.

There are two major types of DXA machines, central and peripheral, each of which has its own benefits and drawbacks.

How Does A DXA Scan Work?

During a DXA scan, the machine aims two X-ray beams at the patient’s bones. Each X-ray beam has a different energy level. Because healthy bone tissue is hard and rich in minerals, it blocks a large number of the X-rays. This means that relatively little X-ray energy reaches the detector on the other side of the scanner. For individuals with lower bone density (i.e., less mineralization), more of the X-rays penetrate the bone tissue.2

How To Interpret A DXA Scan

After the scan is complete, a radiologist reviews the scan. Once the radiologist analyzes the results, he or she sends a signed report to the referring doctor.

DXA scans offer multiple scores for the physician to interpret. The primary output is a measurement known as Bone Mineral Density (BMD). This may be expressed by two primary types of scores:3

A T-score of or above -1.0 indicates normal bone density.

Scores below -2.5 indicate osteoporosis. Thus, people diagnosed with osteoporosis have a bone density level 2.5 standard deviations below the mean.

All DXA scans result in easy-to-interpret numbers that measure bone density. The bigger the number (i.e., more negative), the lower the bone density.

Despite the widespread use of DXA scans, the above guidelines were arbitrarily created back in 1992 during a conference in Rome sponsored by the World Health Organization (WHO) and the International Osteoporosis Foundation (IOF).

Read this article to get all the details on how and why this happened:

One issue is that the reference group used to measure bone mineral loss considered to be the “norm” is the Standard Peak Bone Mass, measured in a group of younger adults in their late 20s.4

Bone mineral density measurements are compared to this normative group to derive the T-score and Z-score. However, there are no international standards for Peak Bone Mass, as bone density varies by ethnicity and geographic location.

Additionally, DXA scan results do not include a crucial measurement of bone health: tensile strength. As explained in the Osteoporosis Reversal Program:

There is a lack of scientific consensus about the interpretation of bone density measurements in regards to risk of fracture. Additionally, DXA scans do not measure tensile strength. Taking a holistic view of health is more accurate than relying on a single number from a DXA scan.

Physicians use DXA scans as a diagnostic tool for osteoporosis and osteopenia because they provide a score that determines whether someone falls in the “normal” range or “osteoporosis” range. Unfortunately, this approach ignores the difference between bone quantity and bone quality. Bone is living tissue made up of minerals and collagen woven into a complex matrix.

When new bone grows during puberty, bone formation rapidly outpaces bone loss. Eventually, however — typically in the mid to late 30s, the rate of bone resorption outweighs creation of new bone tissue.6 This is due to normal biochemical changes that alter the activity of osteoblasts (cells that build bone) and osteoclasts (cells that tear down bone).7 The process accelerates for women after menopause due to changes in hormonal levels.

The take-home message is that to prevent fractures, bone quality is more important than bone quantity. Following a pH-balanced diet, consuming the Foundation Supplements, exercising to build density and get fit, and maintaining a healthy lifestyle has been shown improve the overall quality of our bones. Unfortunately, that is something that cannot be reflected by DXA scan results, which measure only bone quantity.

Don't rely on a single measurement of bone density. When it comes to fracture prevention, quality, rather than quantity, of bone tissue is more important.

The inaccuracy of DXA scans also remains a significant concern for patients and care providers. In a 2001 study published in the Osteoporosis International journal, participants underwent scans in three different scanners made by different manufacturers.8 Even when using specialized equations to account for differences between the DXA scanners, intra-individual measurements differed by an average of 3.5%. Thus, getting a DXA scan on one machine may result in a “normal” scan, while a scan on the same day in a different scanner might lead to a diagnosis of osteopenia.

These findings present an additional challenge for those who would like to track their bone mineral density over time because they would need to repeat scans on the exact same scanner every time. Otherwise, results may vary so much as to be meaningless.

The poor reliability of the DXA procedure makes it challenging to interpret results, casting doubt on osteoporosis diagnoses made solely based on DXA scan results.

Although DXA scans provide a snapshot in time regarding your bone density, results have poor accuracy, arbitrary measurements, and do not reveal bone quality. Unfortunately, this has led to a significant osteoporosis and osteopenia over-diagnosis in the United States and around the world. A growing body of evidence suggests that these bone density measurements do not clearly correlate with outcomes such as fracture risk.

Focusing on a natural, holistic approach to bone health has been shown to reverse osteoporosis and osteopenia, improve bone quality, and reduce the risk of bone fractures.