Incredible! This Polyphenol Was Proven To Protect Osteoblasts - Save Our Bones

Incredible! This Polyphenol Was Proven To Protect Osteoblasts 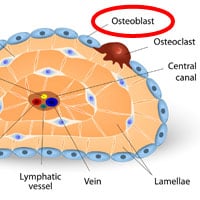 It’s no secret that preventing oxidative damage is a vital component in rejuvenating bone. But specific antioxidants have particular roles in the bone building process, and understanding how they work and what foods contain them is important – and fascinating.

I really appreciate the thirst for knowledge in the Saver community, so I know you’ll be intrigued to learn about this incredible plant phytochemical, found in many Foundation Foods, that actually protects the very cells that build your bones, the osteoblasts.

But first, let’s take a quick look at….

Oxidation: What It Is And Why You Must Prevent It

Oxidation, or oxidative stress, results from an imbalance between pro-oxidants that generate free radicals (also known as reactive oxygen species – ROS) and/or deactivate antioxidants, and antioxidants.

When these reactive oxygen species (ROS) outnumber the antioxidants, oxidative stress occurs in tissues and organs, including bones. This happens because ROS have an unpaired electron, so in their quest to become stable molecules, they take an electron from another molecule. To make matters worse, the typical molecule that was “robbed” (the “reductant” or donor) most often becomes a ROS itself, making this a destructive chain reaction.

Antioxidants work by donating an electron to unstable ROS, and they can do so without becoming a ROS themselves (hence their name). This makes them uniquely suited to stabilize and therefore neutralize free radicals, and halt the destructive chain reaction of oxidative stress.

The best and most abundant source of such antioxidants is found in fruits and vegetables. Not surprisingly, much research has shown the link between antioxidant consumption and a reduced risk for osteoporosis.1 This is why the Save Our Bones nutritional plan is fruit- and vegetable-based, and there is a rich variety in this broad category of foods.

Just as fruits and vegetables come in a large variety of colors, shapes, and flavors, antioxidants come in various types as well. Flavonoids, isoflavones, lignans, stilbenes, and phenolic acids are a few examples.

As I mentioned above, kaempferol is a flavonoid. Flavonoids include such well-known substances as quercetin and catechins. They give foods their rich colors, and quickly lose their effectiveness when exposed to heat.

Kaempferol is a ubiquitous flavonoid present in onions, grapes, citrus fruit, red wine, and the herb gingko bilboa. (More on foods that contain kaempferol below.) Its antioxidant power comes primarily from its ability to inhibit blood platelet formation, cancer cells, and low-density lipoprotein (better known as LDL, or “bad” cholesterol).

When it comes to osteoporosis, kaempferol directly targets osteoblasts, protecting them.

When scientists exposed MC3T3-E1 cells (osteoblast precursor cells) to a toxic substance called antimycin A (AMA), the MC3T3-E1 cells lost significant vitality. Specifically, the AMA caused increased ROS production, dissipation of mitochondrial membranes, and increased intracellular calcium. But when the cells were exposed first to kaempferol and then MC3T3-E1, the cell damage was greatly reduced in all of these areas.2

Kaempferol uses this pathway to boost those metabolic processes that inhibit the toxic AMA.

“All these data indicate that kaempferol may reduce or prevent osteoblasts degeneration in osteoporosis or other degenerative disorders.”2

When ingested in foods, antioxidants are far more effective than taking them in supplement form. Here are some of the foods that are highest in this crucial antioxidant.

A note about raw vs. cooked: while raw foods are optimal for kaempferol content, the Osteoporosis Reversal Program does not advocate an all-raw diet. Foundation Foods, including those above, contain various other nutrients besides kaempferol, and some of those nutrients are more bioavailable when the food is cooked. So a good rule of thumb is not to eat foods only one way. Explore various methods of preparation and enjoy these and other Foundation Foods raw, sautéed, steamed, and so forth.

Eating kaempferol-rich foods is an important line of defense against oxidative damage. But it’s also important to avoid substances that encourage and promote the formation of ROS. Osteoporosis drugs are one of those substances.

Zoledronic acid is the main ingredient in Reclast, a bisphosphonate that’s prescribed as an infusion. Researchers gave rabbits zoledronic acid for four weeks, and they discovered that the rabbits’ glutathione activity was statistically significantly lower compared to the control.4 (Glutathione is also called the Master Antioxidant.)

Scientists concluded that zoledronic acid promotes oxidation by reducing antioxidant levels in the body, particularly in the kidneys.4

Savers know that all drugs are acidifying, and this is just one more example of how these substances promote toxicity in the body. It just doesn’t make any sense to take a drug that’s supposed to build bone when it’s actually causing oxidative damage to crucial organs (the kidneys play a huge role in balancing the plasma pH) and bones.

The Osteoporosis Reversal Program Is Food-Based And Drug-Free

If you’re following the Osteoporosis Reversal Program, then you’re getting plenty of antioxidant-rich, kaempferol-containing foods, especially if you consume Foundation Foods.

This nutritional approach builds and renews bone from within, so you don’t have to worry about dangerous side effects or systemic toxicity. In fact, it’s quite the opposite!