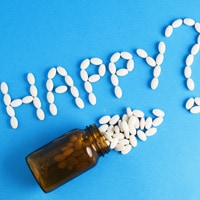 Once again, we’re entering the realm of taboo subjects. The information I’m about to reveal today is so hush-hush that your doctor probably doesn’t even know about it.

A new study from Canada reveals something very disturbing for those over the age of 50 who take a certain class of drugs.

Antidepressants: Something to be Sad About

In addition, women are far more likely to take antidepressant medication than men at all levels of depression severity. The CDC data also revealed that 23% of women in their 40's and 50's take an SSRI. This is higher than any other age group!

That’s what I call sobering news, especially given the effect of antidepressants on your bone density.

Antidepressants and Your Bones

The Canadian study2 revealed something alarming about a particular kind of antidepressant – selective serotonin reuptake inhibitors, or SSRIs – and the damage it does to the bones of people over the age of 50.

The patients in the study took commonly-prescribed SSRIs, including Prozac, Zoloft, Paxil, and Celexa, on a daily basis. Even when factors such as hip bone mineral density, age, and estrogen levels were taken into account, researchers concluded that the risk of “fragility fracture” actually doubled when these SSRIs were taken daily.

This is shocking news, considering that fragility fractures were already considered a problem among this age group.

How do SSRIs raise fracture risk? As their name implies, SSRIs inhibit the reuptake (reabsorption) of the brain chemical serotonin. According to the study,

“Functional serotonin receptors and the serotonin transporter have been localized to osteoblasts and osteocytes, and serotonin seems to modulate the skeletal effects of parathyroid hormone and mechanical stimulation.”2

In other words, SSRIs keep you from forming bone by inhibiting serotonin, which plays a role in bone formation.

And Antidepressants Don’t Even Work!

And let’s not forget the side effects of antidepressants. Besides increasing fracture risk, SSRIs can have side effects that range from unpleasant (nausea, dry mouth) to unhealthy (weight gain, insomnia) all the way to life-threatening (increased risk of suicide).4
It looks like we’ve been deceived again.

Drug companies are preying on some of the most vulnerable among us. Depression clouds decision-making, and presents its own set of physical health problems as well, such as exacerbating bone loss.

Even Unmedicated Depression Hurts Your Bones

Interestingly, those who suffer depression may be more at risk for fractures even without taking medication. A study published in the Archives of Internal Medicine has shown that depressed menopausal women had a greater fracture risk. The study also showed less bone mass in the hips (specifically, the femoral neck) of 17% of women with depression, compared to only 2% of women without depression. And in 20% of depressed women, low bone mass was observed in the lumbar spine, compared to only 9% of non-depressed women.5

The study participants had identical risk factors, sharing similar lifestyles and habits. The only difference was depression. Researchers explain that depression leads to an overproduction of IL-6, an inflammatory body marker. As Save Our Bones readers know, chronic inflammation has a significant negative impact on your bones.

And now we find out that depressed women who take SSRIs have increased fracture risk. So depression itself harms your bones, and so do the antidepressant drugs.

Overcoming depression without drugs is possible. If you suffer from depression, by all means seek help. But that help does not have to involve ineffective, dangerous drugs. There are plenty of natural, drug-free things you can do to alleviate anxiety and depression – this list is only a partial one:

Various studies support the role of exercise in treating and managing depression. A 2005 study in the American Journal of Preventative Medicine showed a depression remission rate of 42% in those who engaged in aerobic exercise 5 times a week.6 And yet another study, this one published in Psychosomatic Medicine in 2000, showed that regular exercise prevented a relapse into depression. In fact, participants in the study who exercised were less likely to relapse than those who took antidepressants.7

The Osteoporosis Reversal Program recommends aerobic weight/bearing exercise for bone health, so improved mood is another great “side-effect” of following the Program. And to really get your bones in top shape, there’s Densercise.

The Osteoporosis Reversal Program and Densercise are uniquely designed to show you how to meet your nutritional and exercise needs, which can help you reach optimal health for your bones and your mind.

To your health and happiness!